Gold Leaf Tobacco Corporation's Simon Rudland, who survived an assassination attempt this week, says he "100%" believes one of his competitors was behind the attempted hit.

When Rudland pulled his black Porsche Boxster into the driveway of the Fair Trade Independent Tobacco Association (FITA) offices in Oaklands, Johannesburg on Wednesday morning, he was ambushed by a gunman who fired nine gunshots at him.

The shooter and an accomplice had been waiting in a white VW Golf in a street adjacent to FITA's offices.

Three bullets struck the cigarette baron - two in his back and one in his neck, after it went through the headrest, missing his spine by 1mm.

Although Rudland had not received any direct death threats, he wasn't entirely surprised by the attempted hit. The tobacco trade is a high-stakes, cut-throat, dirty game, characterised by espionage and violence.

"Obviously, in the industry that we're in, I've been aware and take precautions. But they got me when I didn't expect it. It's a monthly meeting, everyone knows what time we're coming. I always come in the same car with my lawyer at the same time. It all just happened so fast. I came up to the gate and I was having a discussion with my lawyer. As the first bullet went through and shattered the window, I hit the deck. I believe that Porsche saved my life," says Rudland.

A day after the shooting he was already back at work after having surgery to remove the bullet from his neck. Gold Leaf has offered a R10m reward for information that leads to the arrest of the perpetrators.

"I'm 100% sure it's one of the [FITA] members. It's such a cowardly act that they can't confront me directly. My belief, and it's only speculation, the coincidences of what has happened are going through my mind. With Gold Leaf being the biggest competitor they have to protect their share of the market," says the businessman.

Tensions appear to have been simmering both within FITA, and between the smaller independent tobacco producers and the so-called "big boys", the major producers who are affiliated with TISA (the Tobacco Institute of South Africa). These heightened tensions have also been exacerbated by the recent release of a tell-all book about the clandestine black ops and violence associated with the industry, written by former tax sleuth, Johann van Loggerenberg. 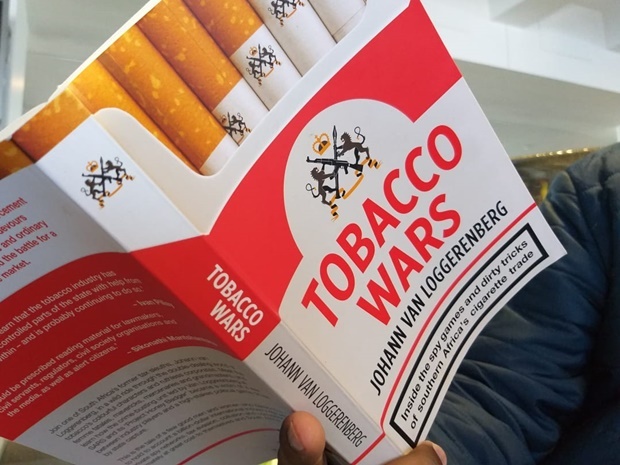 The book lays bare the extent of the dirty tricks, espionage, spying and smuggling that is rife within the tobacco trade. Many of the main players have resorted to hiring well-known underworld and security industry figures as their "heavies" to carry out protection work and investigations.

The result is that any one of a number of players could have wanted Rudland dead. The Zimbabwean is seen as the pioneer of the "cheapies", with Gold Leaf's brands now competing with the major players in South Africa.

"I'm not surprised. He is Gold Leaf. He's the big boys club's biggest bugbear," one industry member says in response to the shooting.

FITA chairperson Sinenhlanhla Mnguni says a motive for the shooting has not yet been established but the net of suspects in the tobacco industry is very wife.

"We are obviously following up with the police. We've handed over the CCTV footage. On our footage, we can actually see that the car was waiting for them to arrive on the road perpendicular to where our offices are situated. At this stage we are still in the dark. He hadn't received any threats. Gold Leaf is a significant player. They had made significant inroads into eating into the market that was previously dominated by BAT (British American Tobacco). In a weird way, things start, sort of, tying together. If you look at the big players and the lengths they are willing to go to protect the market share. We are not pointing fingers, but the industry is one where people are willing to go to extreme measures," considers Mnguni.

"The net is so wide in the industry. There are so many people [who] have interest in terms of the market share, looking to grow or maintain, so it makes it difficult to narrow down a suspect. Simon is also not just in the tobacco industry. So you have to look beyond the industry too," he adds.

When Rudland was shot, he had arrived to attend a FITA meeting which was expected to be explosive, much like the last one that was held the previous month. Other notable members of FITA include Carnilinx, run by Adrianno Mazzotti and Amalgamated Tobacco Manufacturers (ATM), headed by Pietermaritzburg-based Yusuf Kajee.

According to a source who has knowledge of that previous meeting, Rudland's GLTC came under fire from competitors for dropping the prices of popular brands and for allegedly manipulating the false cigarette prices on the streets. GLTC produces Voyager, RD, Sharp and Sahawi cigarettes.

"Allegations were levelled of undercutting and smuggling from Zimbabwe. The bickering on pricing has been ongoing for some time since TISA made a fuss. So they had heated discussions about it and agreed to ensure they stay within tax range," says an insider.

Kajee had prepared a speech to be delivered at Wednesday's meeting but following the shooting, he shared it on the members' WhatsApp group.

Kajee has not confirmed or denied the authenticity of the message, which details the extent of the infighting within the organisation.

"The last few weeks and the way things have been panning out has left a bitter taste for us all. I'm not adding any value by coming to the meetings. As I said, going forward, I will keep my opinions to myself and follow as I'm told to do. Members tend to talk about me behind my back rather than confront me on their issues with me. I have been accused of selling at a certain price and upon investigation, it comes out that the person that is selling the stock is not even a customer of ours and he cannot explain how he is in possession of the said stock. I believe we smaller players should be united at all times and never allow ourselves to be infiltrated. As much as we all say we are united, the fact of the matter is we're not," the message read.

At the end of the speech, Kajee reveals that his life and that of his associate, Paul de Robillard, have also been threatened.

"NB: Rumour in the gangsters' world is that there is a price tag on the owners of ATM. If that is what God almighty intends to allow, then no human can stop it from happening. We await that situation gracefully. This I base on information received that they intended taking a hit at Paul at the rugby game on 20th July. This information we received via our security team at our trucking company from an old friend of his from the force who asked that Paul not attend the rugby as they taking a pot at him. Me they intend dealing with in September. (sic)"

"Thank you for your concern and request for information, unfortunately, I am unable to assist as to anything relating to FITA or its members," Kajee said in a WhatsApp response.

No FITA members have been willing to comment on the incident and have directed all communication through FITA's chairperson, Sinenhlanhla Mnguni.

Mnguni says the organisation is taking threats very seriously but this is not a new phenomenon.

"Look, at this stage we treat every threat seriously. It's one of those things. It's not a newfound concern. When you're part of the industry, we're always mindful of the fact that there are people who have conducted surveillance on our members. In a weird and twisted way, this is the nature of the industry. So I don't think you can be more paranoid."

Since the release of Van Loggerenberg's Tobacco Wars book, a number of concerning incidents have occurred which may be as a direct result of its release.

In the book, Van Loggerenberg confronts the entrenched narrative that the smaller independent manufacturers are responsible for the dirty tricks in the industry. He writes about the exploits and espionage of FSS, which is the private security arm of the "big boys club", TISA.

This week, an ex-member of the SARS high-risk investigation unit (HRIU), which controversially was labelled the "rogue unit", was allegedly accosted by a "known FSS agent".

In a separate incident, all four windows of the car of another former HRIU member, who is still employed at SARS, were smashed in. It was parked outside his SARS office at the time of the incident.

"It was not the first such incident connected to the tobacco trade and will not be the last. The industry is rife with dirty tricks, threats, assault, sabotage, robberies and various other crimes. We tend to simplify the tobacco wars to two parties: The big boys and the small manufacturers. This is a wrong view. The sides are manifold. There are good and bad guys in government agencies. The latter had and still have to an extent, a very distinct relationship with the multinationals, akin to state capture. Events at SARS that started with the bogus 'rogue unit' stories, have their roots among players in the industry and bad apples in the state."

He's issued a warning that the tobacco wars could escalate if authorities don't intervene.

"That neither Mr [Tom] Moyane's SARS, [advocate Muzi] Sikhakhane, [Judge Frank] Kroon, KPMG, [advocate Martin] Brassey, SC, and team, [Berning] Ntelemza's Hawks, [Shaun] Abrahams' NPA, the late IGI (Inspector-General of Intelligence) or SSA (State Security Agency) ever intervened and put sunlight on the tobacco wars, contributed to the escalation of tensions, greater animosity between parties, lawlessness and disregard for law, massive losses to our economy. My hope is that this is a wake-up call for our law enforcement agencies to go back to the drawing board and revive what SARS and other agencies were achieving pre the 2014 disaster at our revenue authority. Any further delays will simply allow this festering war to escalate," says Van Loggerenberg.

Rudland: 'I don't trust anyone'

Rudland is also ominously warning that the violence is going to escalate.

"In my game, I'm sure it will escalate. Obviously people are going to be concerned. It wasn't fatal. The organisation (FITA) is going to fall apart. There are a lot of accusations, a lot of nonsense, which is not good. I don't trust anyone," says Rudland.

He says he hasn't directly confronted any of his competitors about the attempted hit just yet.

Rudland has also called on the police to do their jobs and track down those responsible for the attempt on his life.

He says this kind of violence sends a negative message to foreign investors.

"As a Zimbabwean, it gives us no confidence as businessmen. Looking at it from overseas, do we want business people to behave like this? The message it sends is that if we do well in South Africa, we get killed. But South Africa is not a place I'm going to give up on. I'm back at work. Hopefully, the perpetrators are brought to book and the SAPS (SA Police Service) can do their jobs. I need conclusions."

We live in a world where facts and fiction get blurred
In times of uncertainty you need journalism you can trust. For 14 free days, you can have access to a world of in-depth analyses, investigative journalism, top opinions and a range of features. Journalism strengthens democracy. Invest in the future today. Thereafter you will be billed R75 per month. You can cancel anytime and if you cancel within 14 days you won't be billed.
Subscribe to News24
Read more on:
simon rudlandjohannesburgcrime