Mugabe's dramatic move came after a weekend of high drama between Mnangagwa and Grace after which Mugabe appeared to finally back his wife in the succession race.

Mugabe's axing of VP Mnangagwa 'not surprising at all'

Harare – President Robert Mugabe's firing of his deputy, Emmerson Mnangagwa, is not at all surprising as the vice president had come under extreme pressure over the weekend, a senior researcher at the Institute for Security Studies said on Monday.

In an interview with News24, Derek Matyszak, said: "It's too soon to know how Mnangagwa's supporters are going to react. But I think after what happened over the weekend, Mugabe's move was not at all surprising."

Mugabe fired his deputy on Monday as tensions between Mnangagwa and Mugabe's wife Grace to succeed the veteran leader intensified. 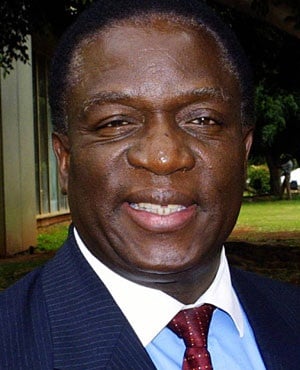 Nairobi - A former Kenyan lawmaker and businessman on Monday filed a petition challenging a presidential election won by President Uhuru Kenyatta, in the latest legal battle to hit the drawn-out poll process.

The former MP, John Harun Mwau, wants the Supreme Court to annul the October 26 election re-run, which was called after the court overturned the results of an initial poll on August 8 in a historical decision.

He contests the inclusion of a minor candidate in the presidential re-run who had been declared bankrupt, and argues that the Independent Electoral and Boundaries Commission.

Harare – The Zanu-PF women's league is reportedly pushing ahead with its support for Grace Mugabe's ascendancy into the presidium, as tension within the ruling party intensifies ahead of an extraordinary congress in December, says a report.

According to Daily News, the Zanu-PF women’s league last week said it was not backing down on its support for the First Lady as one of President Robert Mugabe's deputies.

The women's league was set to hold consultative meetings across the country's 10 provinces ahead of the congress.

Harare – Zimbabwe's ruling Zanu-PF party youth league has endorsed First lady Grace Mugabe as the right candidate to occupy the vice presidency ahead of the extraordinary congress set for December, a report said on Monday.

According to the state-owned Herald newspaper, the youth league's secretary general Kudzanai Chipanga said that Grace was the right candidate because her loyalty to President Robert Mugabewas unquestionable.

Harare – Zimbabwean First Lady Grace Mugabehas reportedly declared that under fire Vice President Emmerson Mnangagwa should be gone from both the government and Zanu-PF, before the ruling party's extraordinary congress in December.

Grace said this as she addressed thousands of indigenous church followers during what was termed a "Super Sunday Rally" at a stadium in Harare on Sunday.

According to NewsDay, the "angry" First Lady said: "Trouble causers in the party must go before the next congress. He (Mnangagwa) must be dropped before we meet at congress in order for us to have unity in the party." Harare - President Robert Mugabe's wife on Sunday said she is ready to succeed her husband as tensions rise in Zimbabwe's ruling party over who will take over from the country's ageing leader.

"I say to Mr Mugabe you should ... leave me to take over your post," she said in an address to thousands of indigenous church followers at a stadium in Harare.

"Have no fear. If you want to give me the job give it to me freely," Grace Mugabe said.

Vice President Emmerson Mnangagwa, who had been touted as a possible successor to the 93-year-old Mugabe, has recently fallen out with him. We live in a world where facts and fiction get blurred
In times of uncertainty you need journalism you can trust. For 14 free days, you can have access to a world of in-depth analyses, investigative journalism, top opinions and a range of features. Journalism strengthens democracy. Invest in the future today. Thereafter you will be billed R75 per month. You can cancel anytime and if you cancel within 14 days you won't be billed.
Subscribe to News24
Read more on:
zanu -pfgrace mugabeemmerson mnangagwarobert mugabekenyazimbabwesouthern africaeast africakenya 2017 elections
Newsletters

R440k for one Daily Lotto winner!
Full list of lottery results
Voting Booth
Have you and your family been counted in Census 2022?
Please select an option Oops! Something went wrong, please try again later.
Yes
47% - 861 votes
No
53% - 961 votes
Previous Results
Podcasts
PODCAST | The Story: How one incident at Stellenbosch University sheds light on deeper issues