'We feared Mugabe would be dragged through streets like Gaddafi': ex-spokesperson

Harare - Robert Mugabe's ex-spokesperson has revealed how the former president was told in November that he could face the same fate as the late Libyan dictator, Muammar Gaddafi if he refused to step down.

George Charamba said he had to warn Mugabe of this possibility during tense negotiations that he helped broker between the former president and the army.

“The commanders sent us with a very chilling message, they said ‘please go and get the president to appreciate the gravity of the situation out there’,” Charamba told the Daily News on Sunday. The new president, who took over from his boss Mugabe after the military stepped in last November, used one of his first tweets to urge Zimbabweans not to be violent in next year's polls. 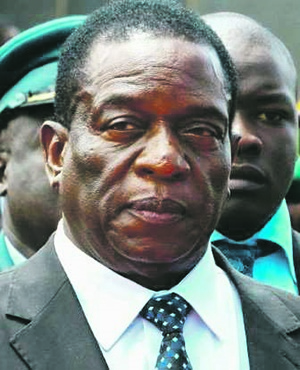 Antananarivo - The cyclone that slammed into Madagascar earlier this month has claimed 51 lives, with 54,000 people displaced by flooding, heavy rain and high winds, authorities said.

Tropical cyclone Ava made landfall on January 5, lashing the eastern part of the African island for 24 hours, with many rivers overflowing, roads cut off and bridges submerged.

Twenty-two people are still missing while 161 000 others have been affected following the storms, the National Bureau for Risk and Catastrophe Management (NBRCM) said late Sunday. Zanu-PF to 'honour' Zim 'icon' Mugabe on his 94th birthday

Harare – Zimbabwean ruling Zanu-PF party's youth league has reportedly said that it is planning to honour former president Robert Mugabe on his 94th birthday, saying that he remains the country's icon.

Mugabe was forced out of power in November after ruling the southern African country for 37 years.

The veteran politician was set to turn 94 on February 21.

Tripoli - Fighting at the Libyan capital's only working international airport killed at least 20 people on Monday, officials said, after militiamen attacked it in an attempt to free colleagues held at a jail there.

Mitiga airport, a former military air base on the eastern outskirts of the capital, was evacuated when the clashes erupted and roads to the facility were closed.

Six Libyan aircraft on the tarmac were hit by gunfire, an airport source said.

Lusaka - Police in Zambia's capital Lusaka on Monday fired tear gas at angry traders marching to the president's office in protest over a ban on street commerce aimed at curbing a deadly cholera outbreak.

The 500-strong crowd was trying to deliver a petition to President Edgar Lungu who has become the public face of the campaign against the outbreak that has claimed at least 70 lives since September.

"Kill us if you want... it's hunger that is going to kill us. We voted Lungu and we want to see him over this issue," shouted one trader as police blocked them from reaching State House. We live in a world where facts and fiction get blurred
In times of uncertainty you need journalism you can trust. For 14 free days, you can have access to a world of in-depth analyses, investigative journalism, top opinions and a range of features. Journalism strengthens democracy. Invest in the future today. Thereafter you will be billed R75 per month. You can cancel anytime and if you cancel within 14 days you won't be billed.
Subscribe to News24
Read more on:
zanu-pfemmerson mnangagwarobert mugabemoammar gaddafigeorge charambazambiazimbabwemadagascarlibyasouthern africanorth africa
Newsletters

Here are the Daily Lotto numbers
Full list of lottery results
Voting Booth
Have you and your family been counted in Census 2022?
Please select an option Oops! Something went wrong, please try again later.
Yes
48% - 2058 votes
No
52% - 2257 votes
Previous Results
Podcasts
PODCAST | The Story: How one incident at Stellenbosch University sheds light on deeper issues