Two of Hyundai’s best-selling SUV in South Africa, the Tucson and Creta, have received a facelift, sporting design tweaks new gearboxes and a few derivative changes for the Tucson.

The Tucson has been given a new front and rear design with the addition of Hyundai's signature cascading grille, new headlights, foglights, front bumper and skid plate.

The Tucson’s interior is also new, sporting a redesigned dashboard with a floating 7"-screen for its infotainment system that offers features such as Apple’s CarPlay.

Two new derivatives are introduced in the revised in the Tucson range, and a new 7-speed Dual Clutch and 8-speed auto transmission form part of the changes.

Getting behind the wheel of the revised @HyundaiSA Creta and Tucson in Franschhoek today with @MrsSpeedQueen @Wheels24 pic.twitter.com/dduUrFYaYH

Its SUV sibling, the Creta also receives an exterior makeover that comprises a new cascade grille with a chromed bezel; a new front bumper with dual-tone finish and skid plates; new foglights and LED Daylight Running Lights. It also gains a new set of roof rails with a lower profile.

The rear profile of the Creta has also been revised with slightly tweaked taillight (with LED inserts), re-positioned reflectors and a new rear skid plate. As with the Tucson, the Creta sports a new alloy wheel design.

Wheels24's Janine Van der Post says: "The Creta, for some reason, feels a whole lot more stable than it first did when it was launched two years ago. Hyundai says there has been no changes on the car's suspension but it genuinely feels a lot more sturdy behind the wheel - and especially when giving it a proper go along Franschhoek Pass.

"I am almost still surprised at its energetic dynamics. It's a comfortable drive and I can understand why it is becoming a firm favourite in its segment."

The facelifted Tucson ­is available in three specification levels:

Executive - added standard features such as an Electronic Stability Programme (ESP) and Vehicle Stability Management (VSM), leather seats, Blind Spot Detection for side-mirrors, Cross Traffic Alert detectors at the rear, electric seat adjustment for the driver and a full auto air conditioner with climate control. An Executive derivative with the 2-litre petrol engine, delivering power through a 6-speed auto, is a new addition to the range, as well as the Tucson R2.0 Executive with a 131kW/400Nm 2-litre turbodiesel engine and new 8-speed automatic. Elite - with top-of-the-range added standard features such as a panoramic sun roof, electric seat adjustment for the front passenger as well, a push-button to start the engine and keyless entry. The Elite derivatives also include the Blind Spot Detection and Cross Traffic Alert safety features. Another standard feature is the extra USB port in the rear, delivering additional power to recharge the devices on-board if needed.

Engines used in the Elite derivatives are the 2-litre petrol; the 2-litre turbodiesel; and a 130kW/265Nm turbocharged 4-cylinder petrol engine which is coupled with a 7-speed dual-clutch transmission.

Inside the updated Tucson

The focal point of the centre console is the floating audio system screen, which has an ergonomic position to allow drivers to stay focused on the road. The infotainment system in the Tucson offers a satellite navigation function when used with one’s Apple cell phone and CarPlay.

The Creta line-up remains the same. All three Creta derivatives are sold with the Executive level of standard features, which includes leather seats, leather-cladding for the steering wheel, multi-function remote controls for the Bluetooth telephone, sound and radio system, and an 8-inch touch-screen display for the infotainment system. 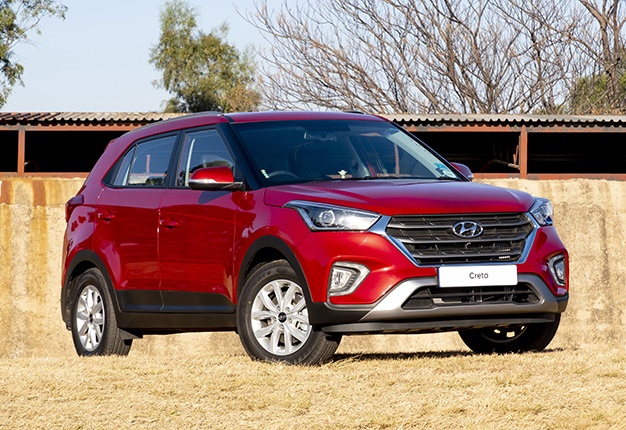 The infotainment system in the Creta also offers an optional satellite navigation feature, which has to be activated with a SD card at a cost of R2 522.

Convenience features in the Creta include air vents for the rear passengers, a rear armrest with cup holders, cruise control and rear park assist sensors and camera that displays its images on the screen of the infotainment system.

The three engine/gearbox combinations used in the Creta range are:

Creta 1.6 Executive Automatic – The same petrol engine as above but coupled with a 6-speed automatic gearbox. Fuel consumption is measured at 8.4-litres/100km.

Creta 1.6 Executive Turbodiesel Automatic – This derivative uses a 1.6-litre turbocharged diesel engine, together with a 6-speed automatic to produce 94kW/260Nm. It has recorded a fuel consumption figure of 7.4-litres/100km .

Apart from the Blind Spot Detection and Cross Traffic Alert (in the Executive and Elite versions), the Tucson has passive safety features such as dual front and side airbags (drive and passenger) and curtain airbags that offers protection for rear passengers as well in all derivatives. Isofix latching points for child safety seats are also fitted to all Tucson derivatives.

Executive and Elite derivatives of the Tucson are also equipped with Vehicle Stability Management that keeps the car stable on wet, slippery or rough roads, as well as Hill-start Assist Control to prevent roll-back when pulling off against an incline.

Safety features in the Creta include Dual front and side airbags for drive and passenger, and curtain airbags for protection of rear passengers as well. The Creta is also equipped with an Anti-lock Brake System (ABS) and Electronic Braking Distribution (EBD).

We live in a world where facts and fiction get blurred
In times of uncertainty you need journalism you can trust. For 14 free days, you can have access to a world of in-depth analyses, investigative journalism, top opinions and a range of features. Journalism strengthens democracy. Invest in the future today. Thereafter you will be billed R75 per month. You can cancel anytime and if you cancel within 14 days you won't be billed.
Subscribe to News24
Read more on:
hyundaisouth africatucsonnew modelscreta
Let's Drive