All of us sweat, and if we didn’t we wouldn’t survive long. But for some the very word “sweat” is enough to conjure up bad memories and odours they’d rather forget.

We’re born with between two million and four million sweat glands to regulate our body temperature. Sweating is the body’s natural way of keeping our temperature at an ideal level. It’s regulated by the autonomic nervous system, which means we have no control over it.

Some people sweat more than others and when their perspiration becomes excessive it’s known as hyperhidrosis, a condition from which up to one percent of South Africans suffer.

Ernesto Ismail has suffered from hyperhidrosis since he was six years old. He’s now 30 and has better control over the condition

that has affected his life for nearly three decades.

“At first I didn’t think anything of my sweaty hands because my mother also has sweaty hands and feet,” he says. “But by the time I was in Grade 7 I was extremely aware of my hands being very clammy.”

Ernesto is a lecturer in mechanical engineering at the University of Cape Town and is currently completing his PhD.

He had to find a way to manage the problem. “I did art all the way through school and ruined a few artworks by sweating on them.

Eventually I learnt to use a folded-up piece of paper under my hands whenever I drew or wrote by hand. Without this intervention,

ink would run and paper would warp.

“When I wrote exams I made sure to have a towel with me to dry my hands because exam stress made the sweating even worse than usual.” Ernesto Ismail, a lecturer at the University of Cape Town, has suffered from hyperhidrosis (excessive sweating) for nearly three decades. PHOTO: Noncedo Mathibela

But what is hyperhidrosis? “With hyperhidrosis, there’s no medical cause for the sweating and it usually normalises during sleep,” explains Dr Rakesh Newaj, a specialist dermatologist in Johannesburg. “The sweating is due to excessive stimulation of the eccrine sweat glands by the sympathetic nerves.” (See Sweaty Facts below.)

Ernesto suffers from primary hyperhidrosis of his hands and feet, and between his buttocks. “In addition, I have secondary generalised sweating everywhere during periods of physical exertion, stress or temperature extremes.” He saw a doctor about his excessive sweating when he was at school but says the antiperspirant that was recommended, Perspirex, caused a painful burning sensation under his armpits and he stopped using it at the time. “Since then I haven’t really sought help specifically, talking to doctors about it only when seeing them for other issues.”

“My doctors have all believed that a sympathectomy (the surgical removal of nerve tissue to block the sympathetic nervous system’s signals to the affected area) is a bad idea,” Ernesto says. He’s been told the side effects, such as nerve pain or erectile dysfunction, are far too common.

He’s now using Perspirex again. “It’s a highly effective underarm antiperspirant that I use every second night. It’s applied at night and washed off in the morning. Using it was painful at first but I’ve become used to it.” Even though his hyperhidrosis is here to stay, Ernesto has found a way to live with it. “I sweat more than ever at the moment. At times I get a bit upset about it but other issues in my life take up far more mental space than my sweating does. “Since I started using my special underarm antiperspirant, my confidence has grown. I used to wear only loose-fitting shirts which were usually white – now I wear fitted shirts with confidence.”

We sweat to regulate our body temperature when exercising, during warm weather or when we have a fever, explains Dr Bets Breedt of Centurion, Gauteng, who has 27 years’ experience as a GP.

WHAT SWEATING CAN MEAN

The most common causes of excessive sweating are menopause, diabetes, pregnancy, hyperthyroidism, medication, substance  abuse, TB and hyperhidrosis (which can be localised or generalised), says Dr Rakesh Newaj, a specialist dermatologist in Johannesburg. Dr Breedt adds that excessive sweating could be evidence of a hyperactive sympathetic nervous system. It could also be a side effect of antidepressants or medication prescribed for thyroid issues or conditions such as high blood pressure and diabetes. HOW WE SWEAT

“The eccrine sweat units are present all over the skin and concentrated more on the palms and soles,” Dr Newaj explains. “The sweat produced by them is watery and odourless and serves to regulate body temperature.” Eccrine sweat units also excrete a small amount of waste material such as urea. Bacteria on the skin’s surface can convert the waste products, causing an odour. “Apocrine sweat units serve no function in humans and are present mostly in the underarm and groin region,” Dr Newaj adds. “In animals the apocrine glands can produce pheromones to attract the opposite sex. In humans apocrine secretion starts only in puberty and consists of various fats and carbohydrates. Bacteria can break down these substances, producing an odour.”

WHEN TO SEE A DOCTOR

“It varies from person to person,” Dr Breedt says “But if you sweat a lot from only one body part (such as the hands or face), if you sweat for no reason (for example, when sitting quietly at your desk) or if the sweating is causing social embarrassment, you’re probably sweating too much.”

Dr Newaj says some people simply sweat more than others due to a genetic predisposition. But if a person sweats in cool weather or if the sweating is affecting their day-to-day activity they should consult a doctor.

You should also visit a doctor if the onset of the condition occurs later in life and wasn’t present since childhood, or if other symptoms, such as weight loss, are present. 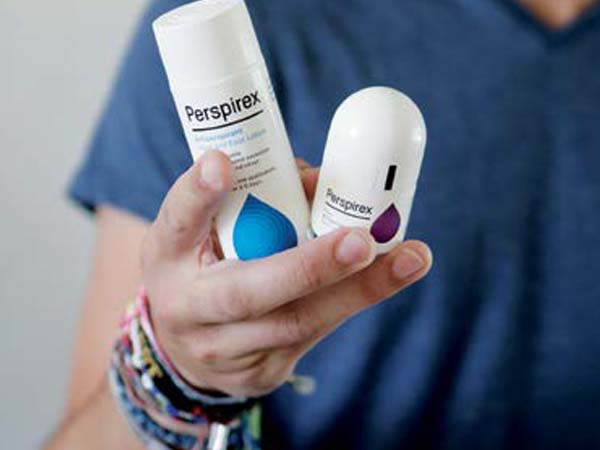 There are several ways to manage excessive sweating. Dr Bets Breedt of Centurion in Gauteng recommends a step-wise approach, starting with deodorants and antiperspirants before moving on to other methods. Surgery should be a last resort.

Antiperspirants usually contain aluminium chloride and must be applied every 24–48 hours. Results should be seen within three weeks. But they can cause an irritation and often must be rinsed from the skin after six to eight hours.

Drichlor, Perspirex, Drysol or Xerac are options, Dr Breedt says. “Other sprays or roll-ons containing glycopyrrolate can be obtained from specialised pharmacies,” dermatologist Dr Rakesh Newaj adds. “These can work on resistant cases but tend to be costly.”

Iontophoresis is a procedure in which a lowgrade electrical current is applied to the skin for 10–20 minutes two to three times a  week, then once every two to three weeks. It can be used only for hands and feet. The procedure isn’t painful but you should avoid it if you have a pacemaker or if you’re pregnant.

You can buy an iontophoresis machine but it’s fairly expensive. It hasn’t been proven more effective than antiperspirants.

Oral medication for adrenaline and epinephrine production. The medication could have unpleasant side effects such as dry mouth,

blurred vision, urine retention and constipation. It must be prescribed by a doctor.

Botox infiltration can be done in the underarm area (about 15–20 injections are needed). A very thin needle is used and the procedure can be mildly painful. It’s only for underarm sweating and provides relief for about six months.

Having botox injections is expensive and has to repeated every six months. Dr Newaj says the side effects are minimal if performed

by specialists but it requires several injections in one sitting, which may be painful.

Surgery called a sympathectomy is an option. It involves the removal of nerve tissue to block the sympathetic nervous system’s signals to the affected area.

It’s a high-risk operation and could cause complications such as very dry hands, eyelid paralysis, nerve pain or erectile dysfunction.

It doesn’t work as well for facial sweating as for sweating of the hands and feet. Dr Newaj says this operation, which requires

a highly experienced surgeon, is rarely performed. It works for 60 percent of patients.