Johnny Depp parties like a rock star amid divorce battle 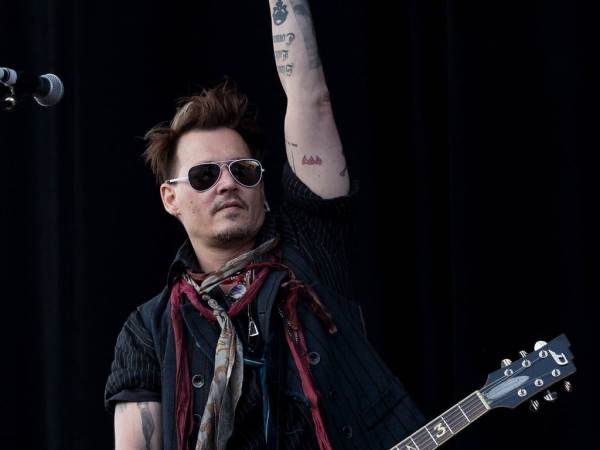 Johnny Depp took his mind off his nasty divorce battle by partying all night after his band's gig in Denmark on Wednesday.

Actress Amber Heard, 30, filed for divorce last week and was granted a protection order against the 52-year-old movie star, who she accused of physical abuse throughout their 15-month marriage.

Heard provided what she claimed was photographic proof of the abuse to a Los Angeles judge, and on Wednesday, some of those shots were released and obtained by multiple news outlets in the U.S.

As pictures of Heard showing off her facial injuries surfaced, Depp was halfway around the world in Horsen, Denmark, where his supergroup the Hollywood Vampires were performing live.

According to People magazine, Johnny and his band's crew members wrapped the gig and hit up the Under Masken bar, where the actor was spotted drinking and chatting with staff until 4am local time.

Photos of Johnny outside the venue, obtained by the U.K.'s Daily Mail newspaper, showed the star chatting and smoking, while a mystery blonde drank out of a bottle of champagne next to him.

The after-party seemed to be a relatively relaxed event for Johnny, with a source telling People, "He only had three to four vodka-and-tonics and basically wound down from the gig. It was a relatively quiet night and Johnny was happy and relaxed... Johnny and the staff were drinking together. There were about 10 or 15 people sitting in a group drinking and having fun.

"He was very nice and took a picture with some of the people in the bar. He was very friendly."

Depp and the Hollywood Vampires will wrap the European leg of their tour in Romania on Monday, before he heads back home to face the fall-out from his divorce head on.

You may also like: Amber Heard accuses estranged husband Johnny Depp of assault