'Too pretty to live': How a woman convinced her parents and boyfriend to kill ‘Facebook bullies’ Her friends apparently threatened and bullied her – and even “unfriended” her on Facebook. So she persuaded her parents to murder them.

The incident led to the recent release of a book by Dennis Brooks in which he tells the strange tale of Jenelle Potter. The book Too Pretty To Live: The Catfishing Murders of East Tennessee tells of a small town that had its soul ripped out four years ago by the murder of a young couple -- and hasn’t been the same since.

Jenelle was a complicated woman.

She was almost 2m tall, had diabetes and suffered from a learning disability. She also had a strangely child-like voice. She never left the house, where she lived with her over-protective parents, and spent hours trawling the internet.

Her only friends could be found in her bedroom -- tons of stuffed toys.

The 31-year-old woman was described by her legal team as having the mind of a 10 year old.

But those who knew her painted her as a master manipulator with a terribly vicious streak. But despite her mental abilities she utilised her persuasive power to turn her parents and a boyfriend into cold-blooded murderers. When her father Marvin Potter (better known as Buddy) and her former boyfriend Jamie Curd appeared in court in February 2012 for the brutal killing of a young couple, there was only the slightest suspicion that Jenelle was involved.

The prosecutor instead hoped that she could be the link to the murders. 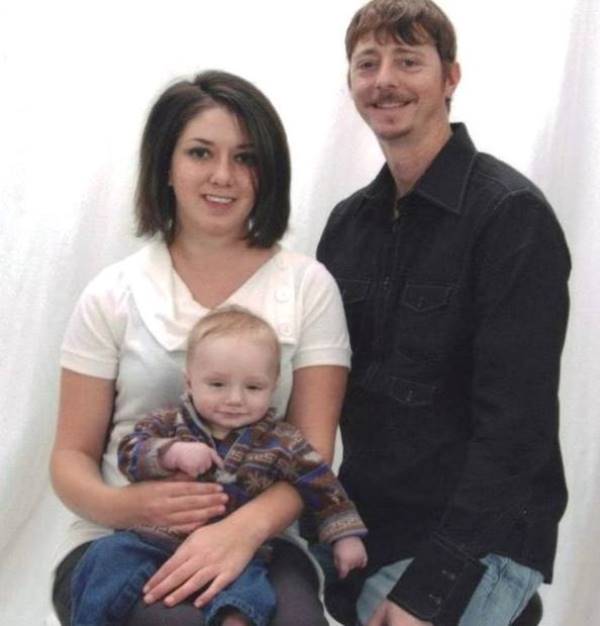 The couple was Billy Payne and his fiancé Billie-Jean Hayworth. They also had a baby boy named Tyler (7 months old).

Billy (37) and Jenelle became friends in 2009, after being introduced by his sister Tracy Greenwell, who worked at the local chemist.

Tracy had taken pity on loner Jenelle and wanted to help her make friends – enter her lovable brother Billy. He was a known as a charming man who always made time for other people. For Jenelle, something of a social outcast, he was something special.

It is believed Jenelle developed an unhealthy obsession with him.

But Billy introduced Jenelle to his cousin Jamie – who she soon started dating. Jamie gave her a cell phone that her parents didn’t know about and soon the couple were spending hours texting each other every day. But when Billy and met Billie-Jean and the two started dated, things changed drastically.

Jenelle suddenly claimed that she was harassed by cyber bullies and leaves the blame squarely at Billie-Jean’s door.

They were threatening her with rape and violence, Jenelle said, flooding her with cruel messages because she was “too pretty to live”.

This is where things got even weirder.

Jenelle’s mother Barbara suddenly started receiving emails from someone called ‘Chris’ who worked for the CIA, the American Intelligence services. This same Chris claimed that he was a former school friend of Jenelle’s.

Chris, who purported to be a widower who loved dogs, struck up a strange virtual friendship, with Barbara, who allegedly had a wild imagination, and was often engaged in some sort of conflict with friends and neighbours

Barbara was so convinced by Chris that began to call him her ‘son’ and he started greeting her as ‘mom’.

Chris wrote to Barbara that Billy and Billie-Jean were the personification of evil. He was a drug dealer and she was whore. He told Barbara that the couple wanted to rape and murder Jenelle because she was a virgin.

This was more than enough for Barbara and Buddy, a former soldier who served in the Vietnam War and had claimed that he was formerly part of the CIA.

Barbara, Buddy and Jamie were convinced that Billy and Billie-Jean were out to get their sweet Jenelle, and decided that had to die.

Buddy and Jamie stormed into Billy and Billie-Jean’s home on the morning of 31 January 2012.

Billy was shot in the head while Billie-Jean was shot while holding the couple’s baby, who miraculously survived.

The small town, which has roughly 2 500 inhabitants, was left reeling when news of the cold -blooded murders broke.

It was common knowledge that things had soured between Jenelle and her former friend Billy – and suddenly the police were knocking on their door. Many refused to believe that Buddy had carried out the murders but six hours after Jamie Curd was taken into custody the police let him call Buddy and got his confession on record. During an interview with ABC News in 2015, Jenelle’s mother Barbara described her as a, “good-natured, sweet person. She’s not an angry person. Very naïve, young in her mind.” But how innocent is she really? It later surfaced that the mysterious “Chris” who had crept into Barbara’s mind – was sending emails from the same IP address as Jenelle’s computer.

Chris also strangely made all the same spelling errors as Jenelle made in her correspondence and even had the same writing style.

Brooks: reading texts from after Jamie was in jail. Says Jenelle has to be writing these texts. @news5wcyb pic.twitter.com/9A9pfSLY9O — Stephanie Santostasi (@Stephanie_NC9) May 11, 2015

The prosecutor Dennis Brooks believes that’s social media allowed Jenelle to be somebody that she wasn’t. “She invented Chris. She could assume a different identity and be as hateful as she wanted to be.”

Christine Glover, Jenelle’s sister, also believes that her sister was capable of planning the murders.

Jenelle and her mother were taken into custody for the murder of Billy and Billie-Jean in August 2013. In October of the same year her father was found guilty of murder and was handed two life sentences, Jamie made a plea deal and will serve one life sentence.

The jury convicted Jenelle and Barbara of murder in the first degree after just seven days in court. Both were sentenced to a life in prison and both deny having anything to do with the murders.

Jenelle also denies that she was ‘Chris’.

Meanwhile, Billy and Billie-Jean’s baby Tyler – who will never remember his mother who held him as she died - is being cared for by his extended family, who are still struggling to come to terms with their loss.