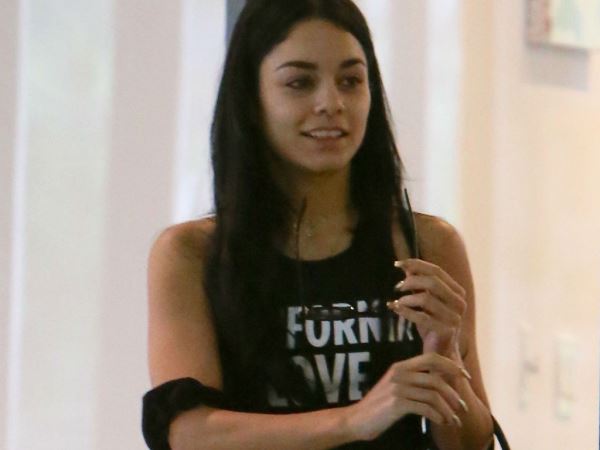 The 26-year-old actress revealed earlier this year that her dad Gregory Hudgens had been diagnosed with the disease, which was already at stage four. And in a touching Instagram post on Monday, Vanessa updated her followers as to her father’s health. Alongside a picture of Gregory standing next to a snap of Neil Armstrong on the Moon, Vanessa wrote: “My daddy made it to the moon. Done with chemo and almost done with radiation. Thanks for the prayers.”

My daddy made it to the moon Done with chemo and almost done with radiation. Thanks for the prayers

Vanessa revealed her father’s diagnosis as she accepted an award for Breakthrough Performer at the 2015 Industry Dance Awards in August.

"Last year, my boyfriend, Austin [Butler], lost his mom, Lori, to cancer, and my dad has just been recently diagnosed with stage four cancer," Vanessa noted during her speech. "Let me tell you, I hate cancer. I hate cancer with every cell of my being."

"This award, it means a lot to me but I dedicate it to my boyfriend's mom, Lori, my dad, and to all the families out there who are struggling with this, because it really takes a strong person and a strong family to be able to help those out who are going through this," she said.

'I hate cancer with every cell of my being'

As her family support Gregory through his health troubles, Vanessa has been trying to maintain a level head.

She revealed in a post on her Tumblr page earlier this week that she has been using the hours she spends stuck in traffic in Los Angeles to remind herself of all the things she is grateful for.

“People talk about driving around in la like it is hell on earth. Everything we decide is based on our perception,” Vanessa wrote.

“When I drive I feel the wind in my hair, the bass from the song I’m listening to, and see the world as the beautiful place God created for us. It’s my meditation. It’s my time to be grateful. •Life is as you make it•”