The slow opening of the 11th Berlin Biennale began a year ago, and since then it has been exploring the many cracks we carry, the fissures that keep us apart and those that bring us together. Many of the invited artists and participants in the Biennale have been exploring and practicing this, each in their own artistic terms, in their own contexts and temporalities

The Crack begins Within are words borrowed from poet Iman Mersal. She explores the many ghosts of motherhood, tearing apart its contemporary morals. She begins with the refusal to become the sacrificed, the “egg that the newborn breaks en route to life.” She rummages in the crevices of this dissent, exploring the many ways that within all the brokenness the mother and child carry, there is pain and beauty, mourning and living. As the epilogue of the Biennale The Crack Begins Within calls out the fallacy of claiming for oneself the destruction of the old and the birthing of the new, refloated so many times by the white fathers as a new scaffolding to secure the continuity of their decaying structures. This is the violence that surrounds us, and that we are a part of.

The Crack Begins Within comprises the overlapping experiences of the artworks gathered in the exhibition, breathing together, touching and moving one another. It is a testament to the powerful collective stories they tell, the work they do, and the things they shatter. The epilogue is an exercise of mutual recognition, an acknowledgement of the cracks in the system, of those broken by it and their struggles. As the carceral politics of compartmentalization are cracked open, art will not disappear into nothingness, but flow into everything. The Crack Begins Within is a nod to the solidarity in vulnerability of the healers and carers, the fighters, their fractures, and their power. The way sexual and gender politics interact with issues such as immigration, race, ethnicity, or neocolonialism are core themes of Carlos Motta’s projects, which use media ranging from installation to symposia, photos, and videos. One of his main concerns is the critique of hegemonic history through the creation of alternative archives and narratives that destabilize notions of gender—thereby creating a corpus of visibility and representation for non-normative subjectivities. Elena Tejada-Herrera, They Sing, They Dance, They Fight, 2020. (Photo: Silke Briel/ Courtesy of the artist)

They Sing, They Dance, They Fight (2020) is a three-channel video installation in which several short video clips are collaged into a disjointed narrative of female struggle and resistance with a punchy, post-Internet aesthetic.

Within the context of widespread femicide around the globe, They Sing, They Dance, They Fight is informed by what Elena Tejada-Herrera has called “the aesthetics of the politics of empowerment.” The artist deploys beauty, glamor, and absurdity to generate narratives that redefine notions of female physical strength and social agency. As one of the most ancient responses to fear, religion is again being ideologically instrumentalized to feed the populist demand for scapegoating and expedite political polarization. Young-jun Tak analyses the moral mechanizations of societies that are currently echoing each other throughout the world by targeting LGBTQI communities. In the artist’s home country of South Korea, Christian leaders and mega churches have risen to dominance in the fields of politics, economics, and journalism, despite the fact that the majority of the population is non-religious. Driven by a belief in “the blessed country” these religious groups direct their patriotic energy towards promoting anti-LGBTQI and anti-migration sentiment and decrying the country’s rapidly shrinking population. In a newly commissioned work developed shortly before the outbreak of the Covid-19 pandemic, Young-jun Tak draws on the way South Korean Christian fanatics try to block the annual Pride parades by throwing themselves on the ground and forming a human chain by interlocking arms.

Chained (2020) consists of ten life-sized statues of the crucifixion, fabricated in Italy, which are installed in a circle on the ground, their arms overlapping. A closer look reveals that the surfaces of the figures are collaged with anti-LGBTQI propaganda flyers promoting conversion therapies and courses, ephemera collected by Tak from churches and medical institutions in South Korea. Most of this material can also be found in the Korea Queer Archive. Dana Michel and Tracy Maurice, Lay them all down, 2020. (Photo: Silke Briel/ Courtesy of the artist)

In Lay them all down (2020), as Michel moves through physical frustration with humor and candor, Maurice drives the camera over the floor, amplifying all sounds, using her body as a tripod that advances and collapses. This is not mere documentation, but a video and performance laboratory that asks if mutual understanding can come from really looking at each other. Both Michel and Maurice dress and undress, follow each other, and create dichotomies around closeness, dimension, speed, and noise. Dancer, filmmaker, camera, and audience are all engaged in the simple yet elusive action of focused observation. Dana Michel and Tracy Maurice film and wear objects that propel them outside comfort and cliché. What remains is the intuitive outburst to be seen and be together, regardless of outcome. 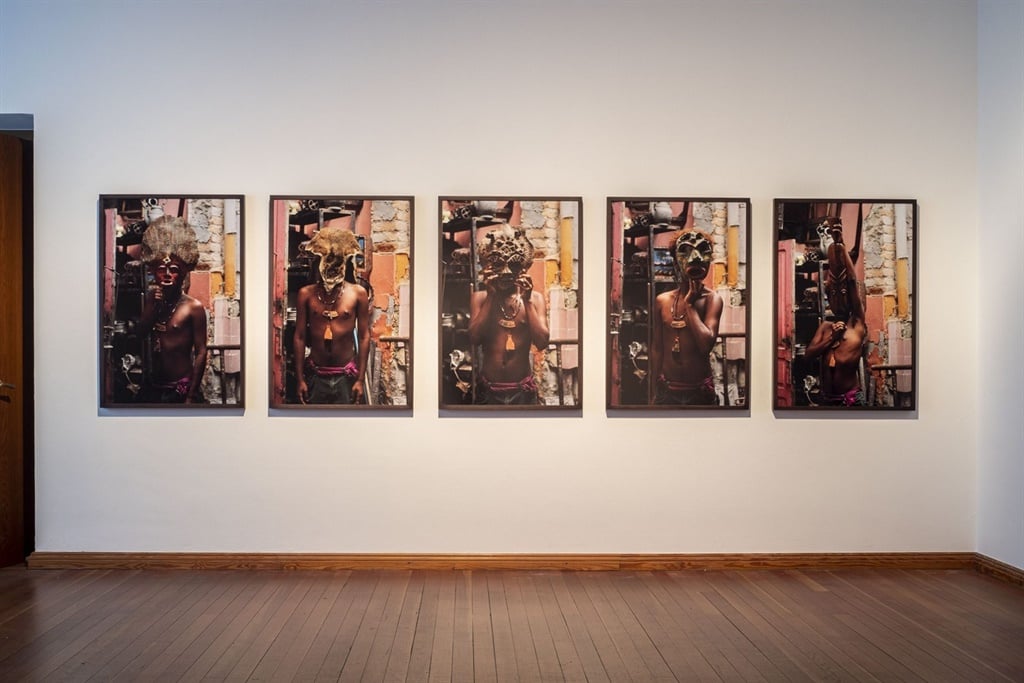 Castiel Vitorino Brasileiro, From the series No antiquário eu negociei o tempo [In the Antique Shop I Negotiated Time], 2018. (Photo: Mathias Völzke/ Courtesy of the artist)

In No antiquário eu negociei o tempo [In the Antique Shop I Negotiated Time, 2018], Castiel Vitorino Brasileiro poses for a series of photographs that show her bare-chested, looking at the camera, her face covered by masks. The masks were found in an antique shop in Santos, Brazil, where they were advertised as African, even though they had been made with papier-mâché, fur, and wood during a workshop led by a friend of the shop owner. By using these objects on her own body, the artist exposes colonial discourses, foregrounding the exoticisation of African cultures and the commercialization of the past. The practices of collecting and the curiosity cabinets that became popular in the sixteenth and seventeenth centuries marked the beginning of a perverse justification of colonial looting and theft—giving rise to the modern museum. They cultivated the symbolic violence that defined the Other as difference and formulated the concept of race. They also created an ontological trap for the Black body, institutionalizing imagery of eroticization and control. Vitorino Brasileiro’s work presents her body—a Black, female body with male sexual organs—as a crossroads for knowledges. Hers is a body capable of incorporating spirits and thus able to liberate those that the West has classified in order to entrap.

We live in a world where facts and fiction get blurred
In times of uncertainty you need journalism you can trust. For only R75 per month, you have access to a world of in-depth analyses, investigative journalism, top opinions and a range of features. Journalism strengthens democracy. Invest in the future today.
Subscribe to News24
Next on Arts24
‘12 Hours of Breathing’ and other must-sees to add to your art calendar this week