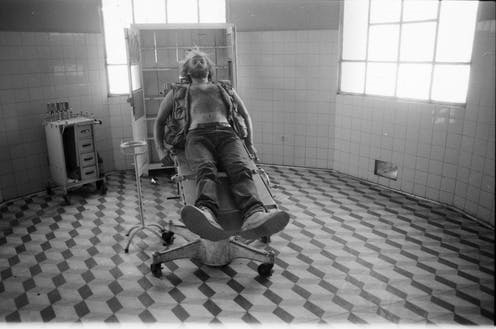 After national service Liebenberg returned to Namibia and worked in the Windhoek post office. He wanted to be a photographer. He also had a capacity to connect to people. He often spoke of the black migrant workers he came to know at the workplace, most of them from Namibia’s northern border area with Angola where the war was intensifying. Known as the ‘border war’ to South Africans and as the ‘war of liberation’ to Namibians, it drew Namibia, Angola and other countries into South Africa’s fight against armed liberation movements supported by socialist countries that echoed wider Cold War politics. Families of South African military conscripts picnic on the Cunene River near the border with Angola in 1987.( © Liebenberg family)

“Endearment” was a term Liebenberg liked to use when talking about his relationship with people, getting to know their stories, and their harsh journeys of necessity to work in the south. One had the sense, many years later, that the stories still obsessed him. It was the same once he joined The Namibian newspaper and began covering the growing urban mobilisation of trade unions and students and, increasingly, the war zone on the border with Angola.

Fellow journalists and friends describe a man with the capacity to jump fences, break down boundaries and disarm people as he moved around like a whirlwind taking photographs, sometimes slyly, but often being touched by people and touching them in turn.

Enemy of the state

Namibia’s transition to independence started on 1 April 1989 and initially foundered with the collapse of a ceasefire in the north.

Hours before the conflict resumed, Liebenberg’s car was riddled with bullets in an assassination attempt. He learned years later from the amnesty hearings of South Africa’s Truth and Reconciliation Commission how his would-be killers, the shadowy apartheid death squad the Civil Cooperation Bureau, had been commissioned to get rid of him.

It’s remarkable how he sustained the intensity of dense photographic coverage of ongoing protest and war in this period, including breaking the difficult story of the accounts of human rights abuses from detainees who belonged to the South West Africa People’s Organisation or SWAPO. Their stories came to light after their release from the dungeons in southern Angola in 1989. Dark days in Soyo. MPLA forces patrol oil installations in Soyo, Cabinda, after their recapture from UNITA in 1994. (© Liebenberg family)

After Namibian independence, Liebenberg moved on to cover the civil war in Angola, which he called the “war of madness”. The stakes were very high, the politics muddied, and human life frequently disrespected.

He photographed the conflict in Luanda after the collapse of the agreement between the Popular Movement for the Liberation of Angola (MPLA) and the National Union for the Total Independence of Angola (UNITA) following the elections in 1992. He accompanied the MPLA forces moving through central Angola to reconquer areas claimed by UNITA, including Huambo. Following his personal code of covering both sides of a struggle, he later photographed UNITA bases in southern Angola. 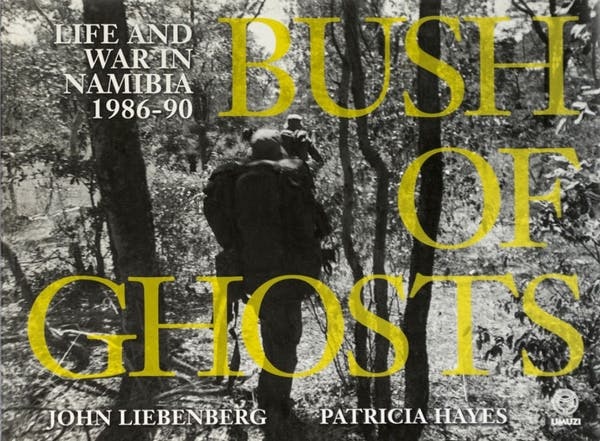 Liebenberg published his photographs of the Namibian war against South African colonial occupation in Bush of Ghosts (2010). He invited me, as a historian of northern Namibia, to collaborate in the task. He was always very clear that the narrative must address all different parties in the struggle.

The book has three chapters. The first follows young white conscripts who are pitched into the war zone of the Namibia-Angola border. It unfolds into scenes where white and black security forces confront local populations who face curfews and threats, who have their fields and homesteads destroyed by armoured vehicles and shellfire, but who often stand with unreadable stillness and dignity in the face of such impositions. This chapter acknowledges the vulnerability of young conscripts, but directly addresses them and the military apparatus of the apartheid state. No other photographer in southern Africa has documented war in this way.

The second chapter in Bush of Ghosts is his homage to Namibians as they mobilised against South African rule. The third is more meditative, exploring the aftermath of war in portraits and landscapes. As Liebenberg’s co-author, I was astounded at the comprehensiveness of the subject matter and the lack of waste in this analogue archive. Chambers of the heart

As we worked, Liebenberg pulled out another body of work he had never shown, the weekend studio portraits taken at the Ovambo Hostel for migrant men in Katutura township in Windhoek in 1986. These are astonishing for the way the men presented their sheer individuality to the camera. When some of these photos were exhibited in Windhoek in 2011, as Weekends at the Okombone, there were dramatic moments of recognition by some of the descendants of the photographed men.

Liebenberg used to talk about the unpredictable way people could enter the “chambers of the heart”. This was not just about love. He was referring to the unexpected emotional consequences of his life work.

There are deep affective implications for a photographer coming close to people’s pain, death, mutilation, guilt, betrayal, mourning, rage or cruelty. Perhaps it made him determined and even reckless, throwing things to the wind and keeping the camera rolling as he famously did during the second plane crash he experienced in Huambo province in the 1990s.

And questions remain about the career and final predicament of a pre-eminent photographer who died in hospital after an operation at age 61 without healthcare benefits. Who often spoke of the exploitation of photographers by newspapers, agencies and networks. He said they were sometimes careless and often demanding about the copyright that would become the only means of survival for an ageing photographer and his family. A photographer whose surviving archive is unique, with the potential to open up the historical memory of nations.

We live in a world where facts and fiction get blurred
In times of uncertainty you need journalism you can trust. For only R75 per month, you have access to a world of in-depth analyses, investigative journalism, top opinions and a range of features. Journalism strengthens democracy. Invest in the future today.
Subscribe to News24
Related Links
Home and the Other: Helena Uambembe grapples with the 'Border War', Pomfret and the 32 Battalion
‘This is not the man I knew’: Jansen van Staden reckons with being the son of a Border War conscript
WEBINAR | Reading the border wars through Jansen van Staden’s photobook ‘Microlight’
Next on Arts24
Cuba inaugurates centre to preserve Castro writings