On hair that speaks: The messages in J.D Okhai Ojeikere’s ‘Hairstyle’ series Johnson Donatus Aihumekeokhai Ojeikere was a documentarian who began chronicling Nigeria in the 1950s after purchasing a Kodak Brownie.

When he died in 2014, his lifetime efforts saw him leaving a visual archive with more than ten thousand photographs dedicated to Nigeria’s aesthetics. His lens focused on architecture, the sartorial and his most regarded contribution: hair.

Whether braided, twisted, bound, knotted, beaded, weaved, threaded, curled or wrapped, the artist had an enduring interest in documenting the ways that women chose to wear their hair.

The result was decades-long projects that we know today as the Hairstyles and Headgear series. The series began in 1968 when Okhai Ojeikere began photographing women’s hairstyles and headwear from a posterior angle. 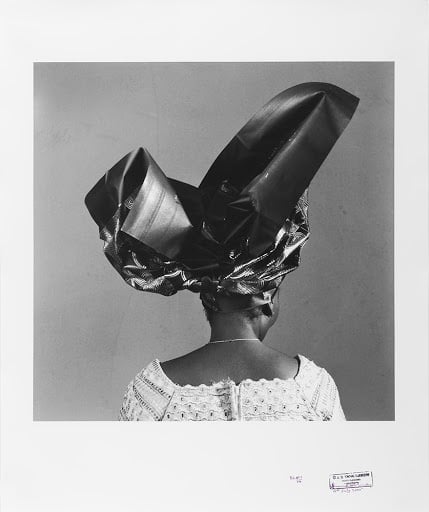 In 2011  Aura Seikkula and the late Bisi Silva curated a show around Ojeikere’s portraits at the Centre for Contemporary Art, Lagos. Titled Moments of Beauty, the show looked at the ways that the artist captured what the Centre for Contemporary Art, Lagos refers to as “the ebullience of Nigerian life engendered by independence and decolonization”.

Taking in Ojeikere’s whole practice as a visual artist and commercial photographer, Moments of Beauty was the first to comprehensively survey and engage with a career that spans more than half a century. In 2014 Silva furthered this as editor of the comprehensive monograph on the photographer’s expansive archive titled  J.D. ‘Okhai Ojeikere. Both the exhibition and monograph have done the work of placing Ojeikere’s work in a position of prominence in the global contemporary art world.

The portraits in the Hairstyle and Headgear series have a double edged sword effect.

First they mimic the fleeting but prized moment when hair braiders stand behind a client with a mirror to show them the completed look from behind. The portraits then give permanency and artistic validation to the temporary (and overseen) sculptural and architectural technique that went into adorning each woman’s head. Speaking on his dedication to the project Okhai Ojeikere said: “All these hairstyles are ephemeral. I want my photographs to be noteworthy traces of them.” In addition to this Okhai Ojeikere’s Hairstyle and Headgear series act as time capsules to a transitional period in Nigeria’s history.

Nigeria was granted independence from active colonial rule in October of 1960. So when Okhai Ojeikere began the projects, the country was coming to terms with the exit of salient colonial cues. In coming to terms with these changes, women who were now accustomed to Western aesthetics began to wear their freedom on their heads. There was a renewed demand for plaiting, threading and head wrapping.

In an interview with contemporary art publication Art Africa, Silva touches on this saying:

West Africans, and other Africans in general, appreciate his work because he documented traditional hairstyles in a way that goes beyond an anthropological necessity. His images captured the hairstyles in an artistic way unparalleled by his peers… Ojeikere was not commissioned to create the Hairstyles series. Rather, it was a project born from artistic license to capture beautifully a part of our cultural heritage that was disappearing due to the influx of new and foreign styles and influences.

We live in a world where facts and fiction get blurred
In times of uncertainty you need journalism you can trust. For only R75 per month, you have access to a world of in-depth analyses, investigative journalism, top opinions and a range of features. Journalism strengthens democracy. Invest in the future today.
Subscribe to News24
Related Links
What these three photos can tell us about 16 June 1976
Reclamations: Photographing recent history
‘Ikhaya Likamoya’: Sethembiso Zulu ushers us into church
Next on Arts24
Ancient vessels shattered in the Beruit explosion get a second chance