Persepolis author on why her artwork doesn't include men: 'They are just too damn ugly to paint' 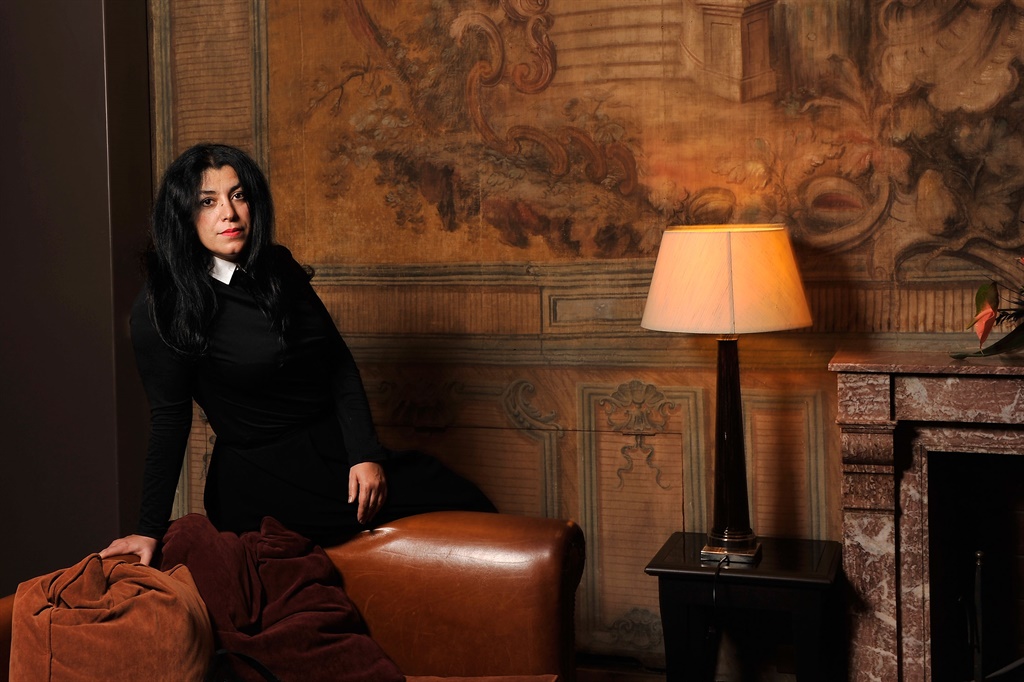 Iranian Marjane Satrapi is famous for her films and graphic novels, but it is her painting which keeps her sane, she told AFP.

The artist who was nominated for an Oscar for Persepolis, based on her graphic novel on post-revolution Iran, started out as a painter.

And that is what she always returns to after writing and shooting films like Chicken with Plums and last year's biopic of Marie Curie, Radioactive.

"Painting is about going back to the origin of what I liked doing. And my mental health depends on it," she said in her Paris studio with its view across the rooftops to Montmartre's Sacre Coeur.

In fact Satrapi has become so French - she hasn't been back to Tehran in two decades - that she has rather taken to Parisians' famous foul humour.

Her giant canvases feature striking women like her with red lips and manes of jet black hair.

"I really like honest, ferocious women," said Satrapi, 50, who has always worn her feminism on her sleeve.

Their sharp contrasts also echo the drawings in her bestselling graphic novels.

Despite Covid-19, and the risk of another lockdown, she is showing 16 of her paintings in the Francoise Livinec gallery in Paris next month.

None of them features men because according to Satrapi, men are just too damn "ugly" to paint.

"All that badly shaved skin. The male peacock may be more beautiful than the female, but with humans it's the women who are much prettier," she declared.

Despite her own long history of outspokenness, Satrapi insisted that she is "against all kinds of radicalism where they want to burn everything down".

"Feminism is all about doing. If I show that I can do something too, even better than a man, I have won the fight and I also set an example," said the writer, who described herself as a "big mouth who knows how to defend herself". But she also hates what she calls a new hypocritical and moralising strain of feminism, "people who are looking for a new kind of religion", Satrapi claimed.

"This moralising side really pisses me off. I don't want to be called a killer for eating a chicken," she added, saying she was against people's lives being forced into "formats".

If "secularism becomes a religion as intolerant as extremist religion, then it's abject," she argued.

For Satrapi humour is essential and a key "expression of human intelligence. Life is about losing everything. You die like a worm or a cat - if we can't laugh about all that, we are beyond stupid."

And before she goes herself, Satrapi said she wants to have made eight films, five exhibitions and four books. "I have a plan for the next 30 years," she joked.

As for her homeland, Satrapi said she no longer "feels credible" in commenting on it.

She misses terribly the warmth of "its hospitality, the Elburz mountains and Farsi jokes... and its poetry,the purest form of expression.

"We are the only people who, when we want to be really understood, quote Saadi, Hafez and Omar Khayyam.

"A people whose mausoleums for its poets are fuller than its mosques cannot be bad," she said.

We live in a world where facts and fiction get blurred
In times of uncertainty you need journalism you can trust. For only R75 per month, you have access to a world of in-depth analyses, investigative journalism, top opinions and a range of features. Journalism strengthens democracy. Invest in the future today.
Subscribe to News24
Related Links
South African artists looking at the question of land
A brief look at LGBTIQ art censorship in Africa
APPLY | Have your work exhibited at Zeitz MOCAA
Next on Arts24
Ancient vessels shattered in the Beruit explosion get a second chance