Part I: Behind the God-swapping in the South African Indian community 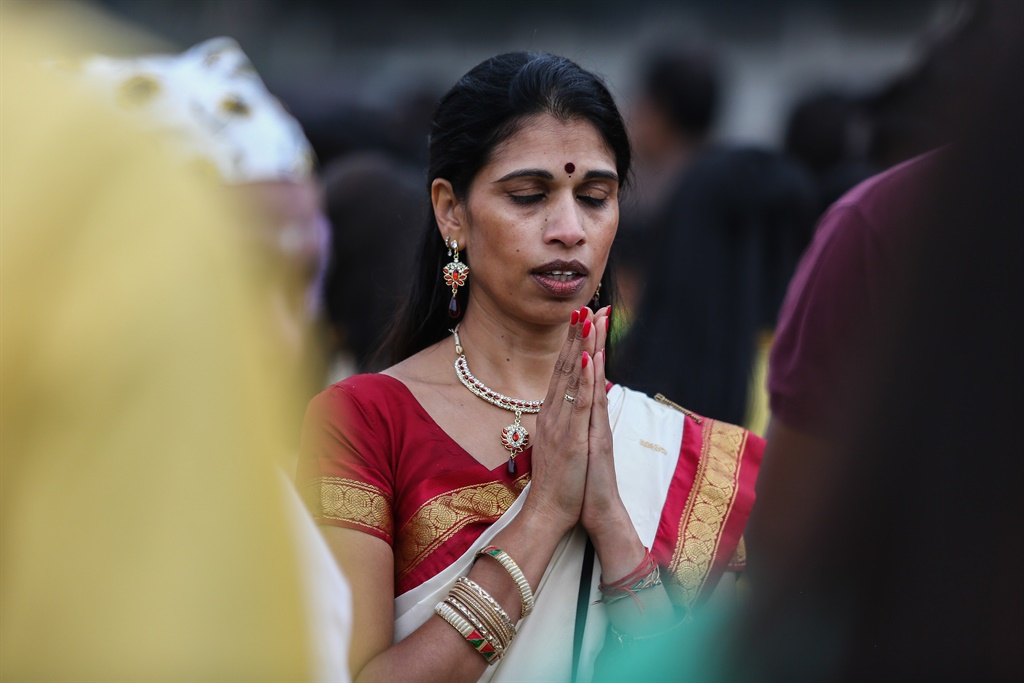 Hindu devotees during the Kavady Festival at the Melrose temple on January 19, 2014 in Johannesburg, South Africa. Hindus across the country celebrated Thai Poosam Kavady, an important religious festival dedicated to Hindu deity Lord Murugan. People take a vow to offer a 'kavady' to the Lord Muruga to avert calamity. This can involve piercing skin, tongue or cheek. (Photo by Gallo Images / The Times / Moeletsi Mabe)

The first group of Indian indentured labourers arrived in South Africa in 1860. The majority settled in Natal because they were originally requested by local farmers. Like India, Natal was a British colony. Most of them were Hindus, although not exclusively so. The 19th century immigration of Indian labourers brought two types of immigrants – “indentured” workers and “passenger” Indians. The latter group came at their own expense. They were largely traders and over time became an economic force to reckon with.

South Africa’s Indian population currently stands at 1,286,930 (2.5% of the overall population). The Indian community can be culturally divided into four broad groups along linguistic lines: Tamil, Telugu, Hindi and Gujarati. They are divided along the following major religions: Hindu (41.3%), Muslim (24.6%) and Christian (24.4%).

The interplay between Hinduism and Christianity in the predominantly Hindu Indian community, and in particular the contentious issue of conversion, has been the subject of great debate and intense research. In this two-part series, Professor Pratap Kumar, of South Africa’s University of KwaZulu-Natal, looks at patterns of conversion in the 20th century and the response of leaders in the Hindu community.

Hinduism is a religion of vast diversity with different philosophical views and religious practices. It has more than 900 million adherents worldwide. Hindus subscribe to some common ideas such as rebirth of the soul based on one’s past actions. Although they worship a variety of gods, such as Vishnu, Shiva or Mother Goddess, they generally think of themselves as of one faith due to similar ideas about life after death.

Christian missionaries in South Africa targeted Hindus to try and convert them. However, contrary to popular belief among the Hindu community, there seems no evidence of significant conversion in the mid-19th century. Much of the Christian conversion activity then was focused on African communities.

There were five major Christian denominations active among Indians at the time – Catholics, Methodists, Anglicans, Lutherans and Baptists. Indian members of these churches were not new converts from the Hindu community but rather those who had already been Christian when they arrived in Natal. When the early Indian indentured workers arrived, the estimated figures along religious lines were as follows: 87% Hindus, 7% Muslims and 4% Christians.

The mission boards did not seem to be that enthusiastic in providing support for the missionary work among the Indian community in order not to cause any disruption to the indentured work. The white farmers were also not so keen for the missionaries to be around the plantations.

The early Christian missionary activity among Indians was mainly focused on providing community services such as clinics, hospitals and schools. Yet, these material benefits yielded hardly any converts.

This is very significant in the context of the early Hindu leaders complaining about conversion. The Arya Samaj is a Hindu reform movement that arrived on the Natal scene in 1905 from India. Its leaders quickly began Hindu reform activity on the assumptions they had made based on their experience in India, where mass conversions did take place in the mid-19th century.

In Natal, however, the percentage of Christians among Indians in the 19th and early 20th centuries remained constant at 4%.

Threat to the Hindu faith

Still, the leaders of Hindu organisations in South Africa saw conversion as a threat to their faith. At its 1918 council meeting, the Hindu Maha Sabha, a council established by various Hindu organisations, urged all Hindu parents to protest against the religious instruction given at the Christian mission schools.

In the initial period of indenture in Natal it was Christian missionaries who established schools for Indian education where Christian religious education was part of the curriculum. As there were no non-Christian schools at the time, the Indian community demanded that government schools be established in place of mission schools for fear of their children being converted to Christianity. In the absence of any statistical evidence pointing to a significant growth in the original Indian Christian population in Natal during the early period, it is difficult to correlate material benefits directly to conversion.

So, if material benefits failed to yield conversions, the question then is: what was the basis of the success of the Pentecostals who came onto the scene later in the early 20th century?

It is largely three factors that made a significant difference to people who were at the lower rungs of society.

First, what is known as the “holiness gospel” that emphasised sin.

The third factor was the focus on social ills such as drugs and crime.

Instead of being involved in community service, the Pentecostals placed emphasis on critiquing Hindu belief systems and caste practices. They focused on healing and exorcism. The Pentecostals have made significant inroads since the early 20th century to date in South Africa.

Gerald Pillay, writing in “Christianity in South Africa”, points out that Pentecostal churches became so active that between 1925 and 1980 the Indian membership of the Pentecostal churches grew larger than all the other Christian denominations put together. It remains the case today.

So why did conversion, especially when driven by the Pentecostals, happen? In the second article in the two part-series, Professor Kumar examines this and the Hindu community’s response.

We live in a world where facts and fiction get blurred
In times of uncertainty you need journalism you can trust. For only R75 per month, you have access to a world of in-depth analyses, investigative journalism, top opinions and a range of features. Journalism strengthens democracy. Invest in the future today.
Subscribe to News24
Related Links
The story of a remarkable Hindu temple in Pretoria’s inner city
Kutti Collective artists contemplate South Africa's Indian heritage
Part II: Behind the God-swapping in the South African Indian community
Next on Arts24
‘Umbango’, South Africa’s first western was part of Apartheid's scheme to keep township dwellers docile