Blacks at the beach: A conversation with Koleka Putuma 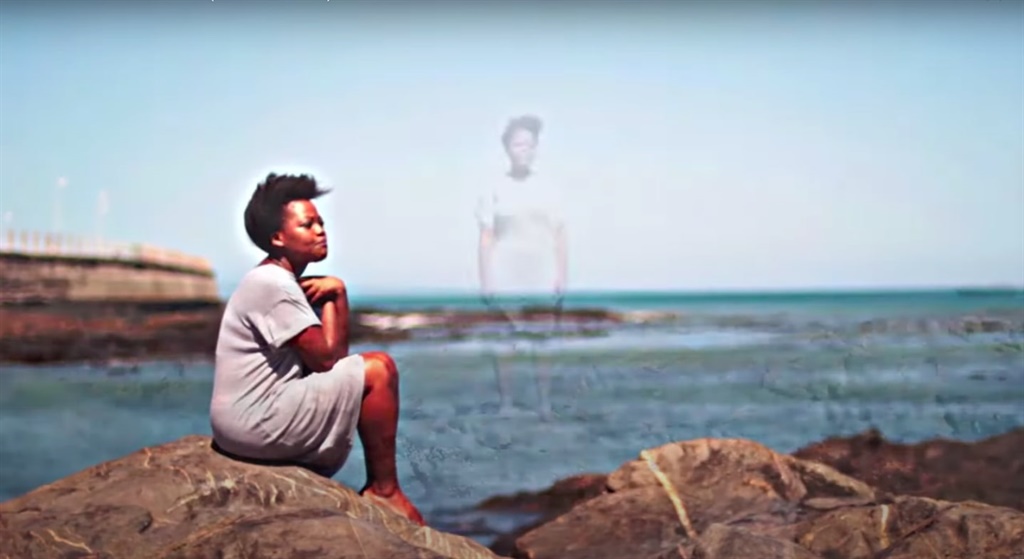 Every time our skin goes under

It’s as if the reeds remember they were once chains

And the water, restless, wishes it could spew all of the slaves and ships

Whole as they had boarded, sailed and sunk

Their tears are what have turned the ocean salty

This is why our irises burn every time we go under

Our skin retraumatises the sea

instrumental in trying to execute our extinction

For you, the ocean is for surf boards, boats, tans

But we, we have come to be baptised here.

– Extract from Water, by Koleka Putuma

James Stinson and Gerald Donald’s Afrofuturist music outfit Drexciya birthed the myth of an alternate Atlantean aquatic society founded by slaves thrown into the liquid blues of the Atlantic Ocean. The Drexciyans are descendants of pregnant women thrown off slave ships like jetsam and, having transitioned quite naturally from womb to sea, learnt to survive there under the blue. Living, dreaming, creating civilisation from destruction.

But water is complicated.

It is freedom, but it is also fear. It is life and it is death. It is transformation, transcendence, turbulence.

One white woman, who will not be named here, disturbed by the number of black people frolicking on her colonially inherited beach, heads to Facebook to voice her dismay.

The poet and performer Koleka Putuma responds with painful clarity through a poem called Water. She speaks of the fear of waving, and drowning; how it gurgled out of our younger mouths with breast milk. She speaks of what water means. Of how we can dread it and love it like a god.

She performs Water at TEDXStellenbosch. It is the last of three poems. In the reading, she is both of the elements we have been taught cannot co-exist. Water. Fire. But perhaps too much of both because a few weeks later the organisers request to publish her talk, but without Water. Her response is inherently performative, a public unveiling of politics and anxieties. Of lines drawn in the sand and smudged borders. An open letter, addressed to the organisers, is published on her blog.

I’m thinking about this as I sit across the table from her. She’s fiddling with a plaster wrapped around the two middle fingers on her right hand and I’m thinking about performance and performativity. About whether or not, as black women who daily perform our blackness, our sexuality and our personalities, we are more primed for play-acting. If, like children of Black Atlantis, we are more prepared, through hardship, to breathe underwater.

In Sold!, a show opening tonight at the National Arts Festival, about the Nama-Herero genocide, she embodies many functions. She sings, performs her poetry and dances.

“Well, not dancing, but moving,” she corrects.

“People are always forcing their gaze on you. With performance, I’m choosing to allow you to see it. The body becomes more free and more giving. It has more agency because I’m choosing how much you can see ... And we’re performing all the time. We’re performing our gender, our sexuality. We’re performing our blackness. But being on stage gives me the liberation and the freedom to ask someone to look at my body. To look at the way it moves, the way it stops. How it stretches and its limitations. What it can do but also what it can’t do.”

Perhaps it is fitting that it is in Grahamstown that her stage persona uses more than her words and her voice, but also her body. Her play, Uhm, which went on to be nominated for the Fleur du Cap Awards, was also shown here last year. In one version of her original story, this is where she fell in love with poetry as performance.

“I feel like I tell this story differently every time,” she laughs.

But here is one rendition: “I’d started writing in Grade 9 in high school, but more as a rapper, and then I think it evolved into poetry. I think it started when I went to Grahamstown in my matric year, and I saw this poet, Ewok Robinson, perform. And something happened.”

She pauses, looking for the something. She exhales, but she hasn’t found it. She continues. “It wasn’t like life-changing or anything, but I saw him and I thought, ‘Oh, that’s cool.’ Something about it really made sense to me ... I knew then it was something I wanted to make a career of.”

The other version is the stuff of all black musical and lyrical mythology. It’s a version that begins on brown, wooden church pews and a younger Koleka feverishly writing plays and productions while Jesus looks down at her in admiration from the altar.

“This blue-eyed and blond-haired, homophobic Jesus I followed in Sunday school has had my kind bowing to a white and patriarchal heaven,” she writes in Water. “For all we know, the disciples could have been queer, the Holy Trinity some weird twisted love triangle and the Holy Ghost transgendered. But you will only choose to understand the scriptures that suit your agenda. You have taken the liberty to colonise the concept of God ... Blasphemy is having to watch my kind use the same gospel to enslave each other.

“Since the days of Elijah, we have been engineered to kneel to whiteness ... because whoever wrote the Bible did not include us.”

And what of the self-imposed schizophrenia anyway

The luxury of self-diagnosed depression

How we suffered strokes

What of the stories

we squeeze from our veins and pens

How we go to war with ourselves

and all our stuff

When did it ever make sense

to put a wound in the line of fire

– Extract from a poem, currently untitled, by Koleka Putuma

Two writers are seated at a café on Long Street, each of them picking apart the eggs Benedict on the table in front of them. They discuss the nature of words, of how they can purge but will also scrape at you from the inside while doing so. The one writer hides behind her byline. The moniker, though fully hers, handed to her by those who came before her, can also always be someone else.

The other writer has no such option. Her words never exist outside of her. They sit somewhere, stewing in the pit of her duodenum until they out themselves. They travel through her voice on a stage, easily recognisable and a full part of her being.

“Through performance, I can go back to a poem and change it or add to it in a way that print doesn’t allow one to do. What publication does with words is that it puts distance between the writer and the reader. Performance allows me to marry my body and my voice in a way that asserts that the two are not in fact separate,” says the poet.

“If I share a poem with people, I’m always asking why. Why am I sharing this? Why am I standing in front of people reading a poem about an ex? How is it going to shift things if I put this out in the world? What effect can it have on the person listening? I want to put poems out there that shift and move. I want to spark a conversation.”

By inviting people to listen, she is inviting a conversation, she says. “I’m interested in what other people think. I want to know what they feel, and see if it changes my relationship with the poem; if it makes me reconsider.”

The poet vacillates while she answers. She returns to the words she’s just uttered, as if editing them in the process. As if she could snatch them out of the air and create a new lexicon while doing so. As if she can change how I’ve heard them, what I’ve decided they mean. Writers know that words rarely suffice. This is part of why they write. To create new words, with new myths and meanings.

I have reached the annoying age

Where I am asking too many questions about things

The family has worked hard at burying.

My vagina is not the only thing that is bleeding

I keep telling myself

The sadness does not believe me

The sadness does not leave

I keep setting a day/date for my social media hiatus

I have just come back. I need to go away again.

But I don’t know how to stay either

– Extract from Your reflections are a bomb in a world that says commit suicide quietly. Your Rant is Life. So Rant. And Post Blog Posts with really long titles. Who cares?, by Koleka Putuma

I’m not sure how we got here.

I think we were discussing slayage. Slaying the pressure to slay. I think we were talking about nakedness. And vulnerability. About the right to fuck up and forgive ourselves. One short meander and “slayage” leads to “ukubekezela” (perseverance). The black woman’s burden to put up with everything life throws at her and survive, back straight and head upright. Brows on fleek while the world whips at her back, hands tied behind it. Sometimes, we concede, it is only right to bleed. Sometimes we must look our mothers in the eye while we cry.

“Ya,” she laughs. But it is not with mirth, but something that resembles realisation. “I’m unlearning that shit. All those things we inherited from our parents that are toxic and destructive. I’m letting them go.”

We live in a world where facts and fiction get blurred
In times of uncertainty you need journalism you can trust. For only R75 per month, you have access to a world of in-depth analyses, investigative journalism, top opinions and a range of features. Journalism strengthens democracy. Invest in the future today.
Subscribe to News24
Next on Arts24
NAC fulfills grant payment to the National Arts Festival