'From the river to the sea': Artists rise up for Palestine 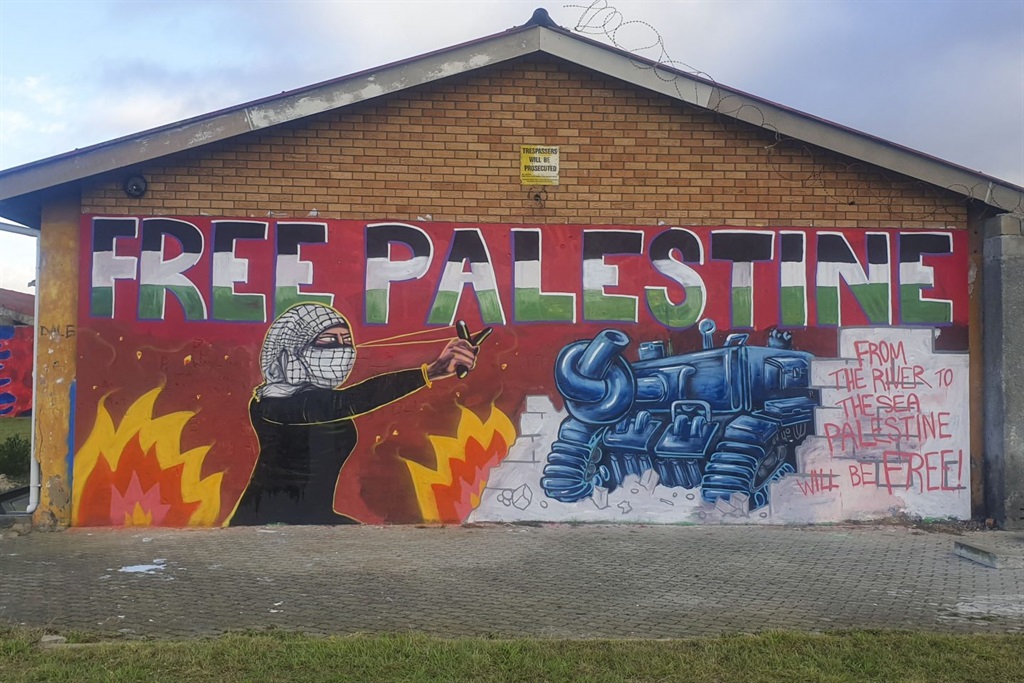 Palestinian twins Muna and Muhammad El Kurd were arrested on Sunday 6 June for speaking out about the injustices and forced removals taking place in their neighbourhood of Sheikh Jarrah in East Jerusalem.

The 23-year-old activists have tirelessly documented their daily struggles with the Israeli authorities in recent weeks, and captured the hearts of the world in doing so.

An immediate global outcry followed their arrests. Lebanese illustrator and artist Nourie Flayhan created an artwork that called for their release. Many other artists did the same globally. Taqi Sbateen’s latest mural shows an Israeli soldier confronting a child, based on the recent attacks in Palestine. (Photograph supplied by Taqi Sbateen)

The siblings were freed later that day. The quick response of artists such as Flayhan has been a regular occurrence since the attacks in Palestine began early in May, showing the importance of art in vocalising resistance.

The works show solidarity and are aimed at spreading awareness and combating media silence. We spoke to some artists who have created recent artworks about the ongoing Israeli apartheid in Palestine.

Ichraq Bouzidi captures the vulnerability and innocence of those caught in the crossfire. The Dubai-based artist responded almost immediately as the situation in Palestine heightened, creating multiple works.

“As a Moroccan born in the late 1980s, we grew up very attached to Palestine,” she said. “We lived the Nakba through our parents and used to sing Intifada songs on many occasions.” Contemplation by Moroccan artist Ichraq Bouzidi, whose work about Palestine captures the innocent caught in the crossfire of war. (Photograph supplied by Ichraq Bouzidi)

Her latest series was inspired by seeing families expelled from their homes in Sheikh Jarrah. “I imagined for a second it was my home and that I lived there my whole life. Then a foreigner came suddenly and threw me out with my family while the world was watching. What a nightmare.”

It is important for Boudizi to keep creating. “I think art and resistance have always been linked in the past, and will remain like that eternally,” she says. “Art expresses what words often fail to do, implicitly conveying messages, pushing boundaries and softening the hearts.”

Designer and illustrator Quasiem Gamiet uses symbolism and imagery to create subversive messages. Gamiet learnt about the struggle for freedom in Palestine through his parents, at an early age.

He describes the moment that jolted him into action recently. “I returned from Taraweeh prayer and saw the attacks on Al-Aqsa and my heart broke. Just moments before, I was able to perform my Salaah in peace while fellow Muslims were being attacked in the third holiest site in Islam. I started sharing content but it seemed to go nowhere and unnoticed, which broke my heart further. I decided to start illustrating what was happening.” Gamiet remains hopeful about the resistance movement in Palestine. “People on the ground are the true journalists now. It’s amazing to see, even though people are being censored.

“Art always played a huge role in revolutions, whether it’s in the form of music, protest art or raw graffiti with liberation messages. There’s so much power in it. It is and always will be the voice of the people.”

Omar Osama Sarsour is a civil engineer, digital artist and photographer who grew up and is based in southern California in the United States. Sarsour’s work portrays Palestinian resilience, independence, strength and humanity. “The photos tell our story better than I could. I think we have one of the most beautiful underdog stories of modern time,” he says.

His parents are from Palestine and moved back in 2007, so he was able to make multiple trips there. “It wasn’t until I started visiting Palestine more often that I really started to understand that our resilience to Israel is the best representation of our humanity, as we continue to fight for it,” he says. “What we are seeing today is that the generation of Palestinians who are sons, daughters, grandsons and granddaughters of refugees of the ongoing Nakba now have a louder voice in the Western world, that the generations before us never had. Refugees are in the range of seven million. We did not forget and never will.

“Whether through music, painting, photography, writing or poetry, art has a special way of tapping into human emotion and unlocking it. I think of the apartheid wall Israel built all over Palestine, blocking Palestinian villages and travel. Palestinians and activists have taken something ugly and used it to express their beauty of expression through art and messaging on that very wall.”

Artists Jonathan Hendricks and Flowrinwatr joined forces to paint murals around Cape Town in solidarity with Palestine, creating their first on Eid on 14 May.

“Gaza is the microcosm of everything that’s happening in the world today,” Hendricks says. “Our art means nothing if people do not engage with it. We want to make people feel something, to write or film something. To feel compelled to boycott, to attend protests, put real pressure on public and private institutions to divest, sanction and effect real change. We need to understand that all of our oppressions are linked.”

Hendricks adds: “The more one learns about the plight of Palestinians, the more the spell of confusion fades away and you understand just how simple it all is. I caught on very quickly as my parents and grandparents were forcefully removed from District Six during apartheid.”

Teacher and culture worker Flowrinwatr says: “We wanted to draw links between seeing struggles of our ongoing spatial apartheid with those of the Palestinian and Colombian people, and all countries around the world where people are still fighting for their humanity and for survival.”

The work of artist and illustrator Grant Jurius deals with land struggles and the injustices experienced by indigenous people globally. “I feel like Palestine has been turned into a ghetto, systematically. So in that sense, my connection is that I can relate with the sense of being oppressed, coming from a Black, segregated community in Cape Town.

“Something that just shook me was the level of intensity of the atrocities that were going on. We saw through first-hand footage and accounts where people were being attacked repeatedly.” Grant Jurius was inspired to create Voices of Heroes by the strength and resilience of Palestinians and their ongoing fight for freedom. (Photograph supplied by Grant Jurius)

Jurius says the resilient spirit of Palestinians is what prompted him to create work. “I thought of the people who are warriors. It’s not that they want to be, but they are forced to be. All they have is the faces they put on camera, their flags to raise up and the stones to defend themselves. That’s why I did an illustration of everyday civilians with their flags, being so oppressed but still being able to raise their hands and their flags in pride.”

On South Africa’s connection to Palestine, he says, “The trend of oppression and apartheid is clear in our history … This prompts us as artists to make work that subverts all of that. Because we are just being educated by one side of the media all the time, and we want to educate ourselves and people around us as much as we can.”

Political cartoonist and artist Khalid Al Baih is currently based in Copenhagen, Denmark. He grew up around Palestinian refugees and his recent work focuses on censorship and media control. Al Baih uses his work and platform predominantly to raise awareness on global issues of injustice.

The momentum the resistance movement has gained is “as much a surprise to the dictators and oppressors. All you need to do is keep going because they bet you will get tired,” he says. Mute by Khalid Al Baih juxtaposes the mute symbol with the word Palestine in Arabic, alluding to the silencing of activist voices from Palestine and the continuous one-sided media coverage. (Photograph supplied by Khalid Al Baih)

Censorship is “a political game”, he adds. “Controlling the media and deleting the past is a huge part of it. We’ve been through this with the Arab Spring, but artists right now will go through a huge mental stress, because they will have to keep going. And they’re going against machines, war machines that study your behaviour.”

But Al Baih remains hopeful about the power artists carry. “Art can really open your eyes and start a discussion. But you have to be brave in pushing through … Art is always the thing that explodes when there’s tension. You can feel it. During the Arab Spring, you went to any town and it was like a ball of paint just dropped, all the walls were painted. It’s a big move to move from those Facebook walls to the actual neighbourhood walls. That takes a lot of courage now.”

Artist Anwar Davids’ latest series of illustrations dedicated to Palestine revolve around themes such as protest, prayer and power.

They were inspired by “a build-up of emotions from years of watching how lies and manipulation became the norm”, he says. Because of the censorship of Palestinian voices, he wanted his work to create mainly awareness. Know Their Names by Anwar Davids. He has created several works over the years highlighting the plight of Palestinians. (Photograph supplied by Anwar Davids)

He explains that his connection to Palestine is through Islam. “I live by the quote of our beloved Prophet Muhammad. ‘The Muslim ummah is like one body, if one part of the body is in pain the whole ummah should feel that pain.’ This goes for all my brothers and sisters and humanity that is suffering or being oppressed all over the world.”

For Davids, art allows for a different perspective. “It gives the viewer the opportunity to think for themselves … We as artists should use this gift and create art that will make a noise. If you as an artist are on the side of humanity and justice for the oppressed, then paint, spray, draw, sketch, doodle, digitise… whatever your medium. And express your feelings and be a part of history and start the change.”