“I want people to understand what healers go through,” says Sethembiso Zulu, a visual essayist with training as a photojournalist and healer.

Through a divine blend of fellowship, intercession, research and photography, Zulu’s debut solo exhibition Ikhaya Likamoya (hosted by the North West University Gallery) invites audiences to bear witness to the intimacies and intricacies of Zionist spirituality as well as the journey of healing and being healed.

When Zulu concluded his training as a healer in 2005, he returned to a world of disintegration and abandonment. As a result of centuries of colonial misinformation and people's preferences for observing western religious norms in the spaces he occupied, loved ones shunned Zulu for becoming isangoma. “Let me tell you, I couldn’t cope at that time,” he sighs.

Until Zulu was led to the Zionist church for fellowship, he continued to grapple with feeling of displacement and coming to terms with his calling. “When I got there, I didn’t have to explain myself or feel embarrassed mangivukelwa umoya. I could be my full self because I was protected. Umoya wam had found a home.”

Ikhaya Likamoya is the second part of an untitled trilogy aimed at documenting the role of dreams, prayers, interactions, songs and visions in the development of Zulu’s healing practice. The first series, Ukwambulela (referring to revelations) features 34 photographs and focuses on Zulu’s dream-based communication with his ancestral guide and grandmother, Christina Zamashenge Mdlangamandla. 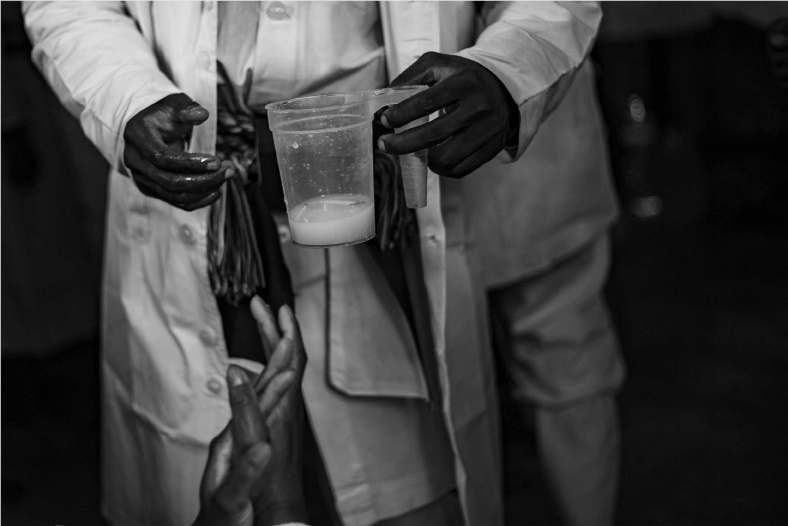 To translate the varied and multisensory encounters into still depictions, Zulu seems to make use of a number of interventions that span theatre and film.

The artist borrows from theatre through his use of performance and costuming. In Ukwambulela, Zulu uses performance to reenact his dreams and visions. With regards to costuming, most, if not all, of the subjects photographed in Ukwambulela and Ikhaya likamoya are women wearing white prayer garments. Their constant presence acts as a symbol for his grandmother’s unwavering presence and influence in the narrative.

From film, Zulu takes monochrome filters in addition to using panning and a slow shutter speed to achieve blurriness. With the goal of immersing the viewer in the spiritual setting of a Zionist church, his black and white images attempt to facilitate focus by removing the distraction that colour can bring. When asked about the deliberate use of blurriness, Zulu refers back to a conversation he had with veteran photographer and member of Afrapix Photographic Collective, Peter McKenzie who was a facilitator at the Market Photo Workshop while Zulu studied there: “He said to me, “You can’t capture spirituality. But you can give a depiction of what spirituality feels like. "The blurriness is my depiction of constantly being moved by the spirit.”

To bring Ikhaya Likamoya to fruition, Zulu worked with multimodal artist, scholar and curator Senzeni Marasela. “She taught me so much. Not only about making my story into art but about curation, exhibiting and using different mediums to take my work from a photo essay into an experience. I did so much research” relays Zulu.

Following two months of research conducted with abafundisi from various Zionist churches, Ikhaya Likamoya was shot over a period of six months at a Zionist church just outside the Nancefield hostel in Soweto. Seeing that Zulu’s connection to the Zionist church is tied to his grandmother delivering the message to him while adorned in the church’s white regalia, the photographs had to be taken on the first Sunday of the month when congregants fellowship dressing in their white uniform. "Ikweshumi". (Sethembiso Zulu)
Sethembiso Zulu
Apart from the necessity of white garments in the telling of Zulu’s journey, the decision to prolong the duration of the project was informed by Zulu’s experience with the shortcomings of photojournalism. “I normally refer to what we do as photojournalists as a hit and run,” explains Zulu who works for Eyewitness News. “We’re told about a story; we go and capture it, then we come back to the newsroom and file.” With news being disseminated digitally, photojournalism has had to adapt its pace to meet that of instantaneous breaking news stories. As a result, the discipline often no longer has the time or room to display the complexity of what it looks to capture. Unlike the visuals for news, the encounters Zulu was looking to document are mercurial and take place in a space freed of the constraints of time.

Although the series isn’t Zulu’s first body of work, Ikhaya Likamoya is his first public show. “We’re looking at someone who takes photographs every day and has done so for over ten years without exhibiting,” adds Marasela. As an established and internationally exhibited artist, Marasela is well aware of the barriers to entry before one can show their work in a commercial or public gallery. “The market is quite tight in the country. Even though it doesn’t look like it to so many, entry into the market is quite difficult and especially for black artists. There aren’t enough spaces to serve the amount of talent we have.”

With Ikhaya Likamoya being the first show, it was important for her curatorial mediation to involve placing the work in feedback-conducive space. “He needs to get feedback other than from me. We want people to have questions and hold symposiums around his work,” explains Marasela. “[North West University] is an academic institution, a centre of thought and the correct space to begin conversations.”

Overall Ikhaya Likamoya manages to use 15 images to sincerely transport audiences into a space of becoming, believing and reckoning with the layers of healing work. It is testament to what happens when the artist lives the story that they are telling.

The virtual leg of Ikhaya Likamoya precedes a multisensory exhibition to be held at the University’s physical premises. The online exhibition can be seen here.
We live in a world where facts and fiction get blurred
In times of uncertainty you need journalism you can trust. For only R75 per month, you have access to a world of in-depth analyses, investigative journalism, top opinions and a range of features. Journalism strengthens democracy. Invest in the future today.
Subscribe to News24
Related Links
Children of Dystopia: Violence and Justice in Kenya’s Tuko Macho
Vukazithathe: Portrait of a Makandi artist as a friend
Redacted portraits, temporary solutions: on the work of Lunga Ntila
Next on Arts24
'Because I'm black and trans, he wanted to make me small for pleasure': Monetising the male gaze on OnlyFans