Johannesburg’s inner city: the Dubai of southern Africa, but all below the radar 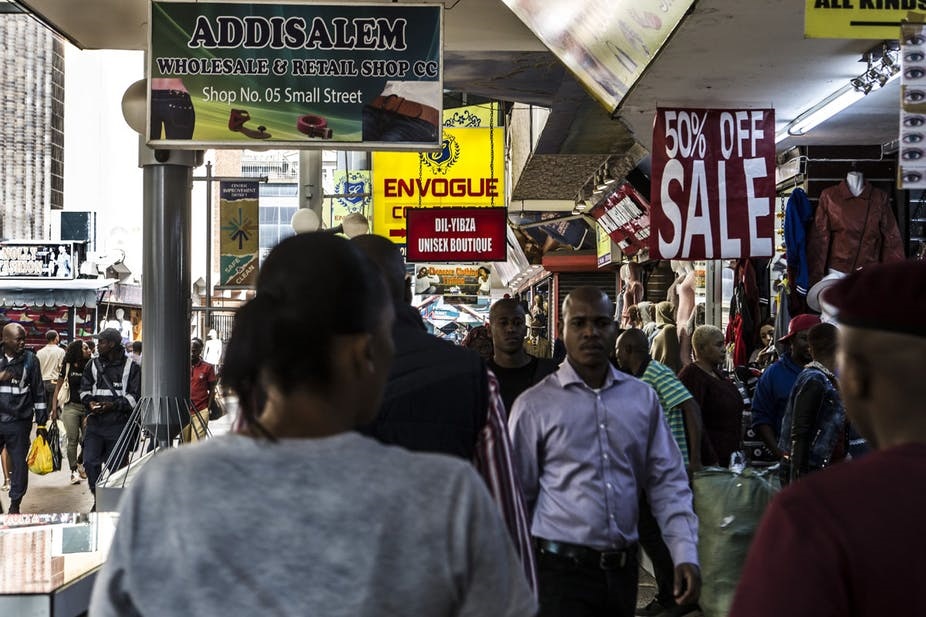 Over the last 20 years Johannesburg has become an intense wholesale and retail centre for local hawkers and for traders from all over sub-Saharan Africa. Billions of rand worth of fast fashion is sold annually in the traditional central business district and in 20 large Chinese shopping malls west of the inner city.

It is a vast, booming, low-end globalised trade that has transformed space and pioneered a retail phenomenon in the inner city for the sale of cheap clothing, shoes, household wares and accessories. Informal estimates based on bus passenger numbers and spending reported in the survey suggest that cross border shoppers are spending over R10 billion each year in Johannesburg’s CBD.

A new study into cross-border shopping in the inner city maps the shops and the goods sold. Researchers did detailed interviews with 300 retailers and 400 cross border shoppers as well as hotel managers and bus operators that service the flow of shoppers who travel to Johannesburg from countries including Mozambique, Zimbabwe, Malawi, Lesotho, Swaziland and Zambia.

The survey gave the first concrete insights into a vast trading web that operates in the cash economy and below the radar of formalised planning regulation. Yet it is an economy yielding four times the annual turnover of an average regional sized shopping mall.

The extent of the trade isn’t really known. And the scale of cross border shopping is widely disputed in City offices and among property investors. But the survey shows that the city of Johannesburg should acknowledge that its inner city has developed into the shopping hub of sub-Saharan Africa. Some retailers have dubbed it the Dubai of South Africa. That ambition – that it be a global retail centre – should be embraced in economic strategy and in physical plans to upgrade the area.

The research focuses on 53 city blocks within the Johannesburg CBD anchored by more than 3000 shops. These are streets that bustle with street traders, ground level shopping alleys and high rise shopping centres. The shopping zone is close to rail, bus and taxi infrastructure. It is also served by cross border bus depots and hotels.

The shopping hub is intense with throngs of pedestrians and determined shoppers crowding the streets on any given day. Buildings that have outlived their usefulness as office space and medical suites have been appropriated and converted at a rapid rate – primarily by migrant Ethiopian traders - to shopping centres hosting thousands of cupboard sized shops.

This activity has developed over two decades. It started as a quiet encroachment of space in the mid-1990s when Ethiopian survivalist entrepreneurs, who had fled their country to seek political asylum in South Africa, rented space in almost empty office towers. The space grew first incrementally and then in rapid bursts to become a burgeoning economic enclave created through the dramatic occupation and subdivision of space.

Based on the interviews, we calculated that the annual profit takings in the city blocks we surveyed amounts to close to R7 billion profit every year. But this is likely to be a major underestimate.

The sample survey indicates that about 70% of the shoppers contributing to these profits are cross border shoppers. Each shopper is spending an average of R14 364 on goods per shopping trip. In addition R3 497 is spent on other services including transport.

A large number of bus companies is linked to the trade. On one day 51 bus companies were operating from 19 sites. In that same week, a moderate shopping season of the year (mid August), 465 buses carrying up to 60 passengers - many of these being shoppers - left Johannesburg to neighbouring countries.

Johannesburg as a violent city

But retailers and shoppers face enormous risks. The dependence on cash poses a big risk in an area rife with crime and corruption and where law enforcement agencies appear to be complicit in illegal activities.

Over 60% of retailers interviewed said they had been physically attacked or assaulted. And 38% had regularly “gifted” police officers.

For shoppers the risk is also extreme. A third of shoppers interviewed had been exposed to violent crime. They travel in groups and hide their money. They depend heavily on the security and storage facilities of hotels and bus depots for safety.

These levels of crime are a major break on Johannesburg’s ability to maximise the benefits of these shopping trips. Shoppers are spending an average of 2.5 days on each trip. But they spend comparatively little on accommodation and almost nothing on entertainment. And they are too fearful to spend more time in Johannesburg than their shopping requires.

Most said they didn’t use city restaurants, preferring to lock themselves in their hotel rooms in the early evening. And retailers said they would like extended shopping hours but they close shops around 5pm because of safety concerns.

Cross border shoppers are international visitors to Johannesburg. Their visits increase the demand for services, products and good infrastructure – all of which attract jobs and investment in the inner city. They require and inspire new investment in buildings, maintenance, entertainment services, transportation services and accommodation establishments. They transform buildings and environments. And they attract and support new cultural enclaves and diversity.

Shoppers and retailers say they would like to increase their investment in shopping in the inner city, there are signs of renewed interest from property investors and a number of new shopping centres have been developed in recent years.

But this potential will go untapped unless the city changes its attitude and tackles the risks in the area. Crime – particularly crime committed by law enforcement officers – must be curbed. By recognising and celebrating this sub-Saharan African shopping hub Johannesburg can take full advantage of the benefits of being the region’s shopping hub. In turn that could lead to Johannesburg becoming the host of choice for shoppers and retailers in this international trade.

We live in a world where facts and fiction get blurred
In times of uncertainty you need journalism you can trust. For only R75 per month, you have access to a world of in-depth analyses, investigative journalism, top opinions and a range of features. Journalism strengthens democracy. Invest in the future today.
Subscribe to News24
Next on Arts24
City of Cape Town to evict The Willow Arts Collective in Observatory