Kudzanai Chiurai's Library of Things We Forgot to Remember 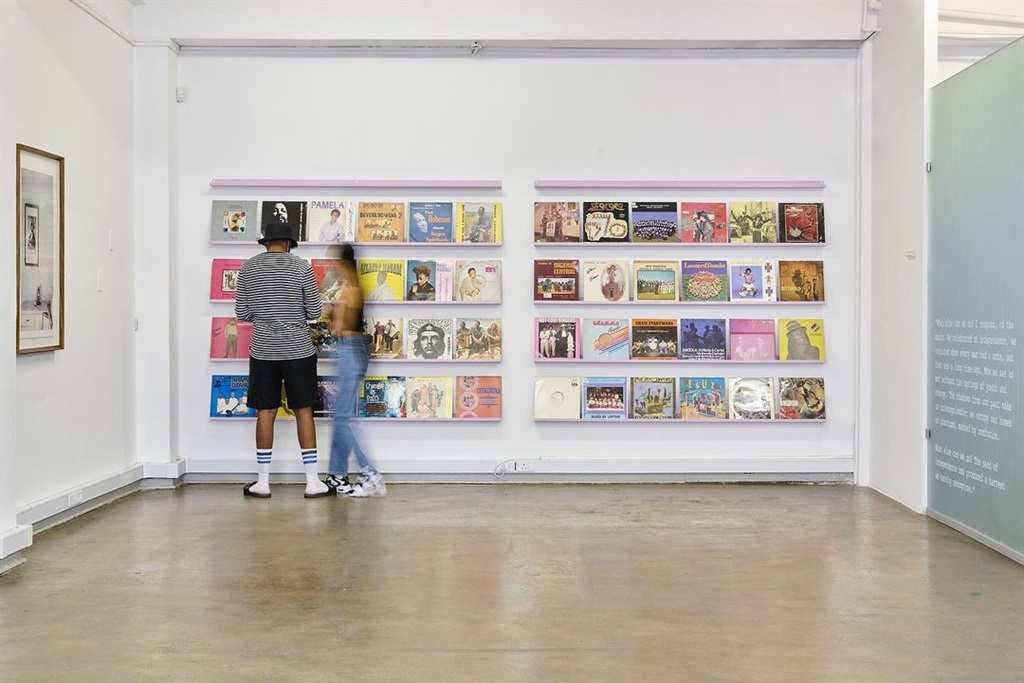 The Library of Things We Forgot to Remember, is an archive of materials including vinyls, posters, paintings and more, drawn from private African collections.(Anthea Pokroy/Courtesy Kudzanai Chiurai)

Zimbabwe born artist Kudzanai Chiurai is a phenomenon. He is one of the most challenging and inventive figures in contemporary African art. From large scale photos of fictional African dictators to experimental films and protest posters, rich oil paintings and minimal sculptures, his work is housed in the world’s top galleries and collections.

Chiurai, though, frequently shrugs off gallery spaces to show in warehouses, on the street or in urban locations. His latest project, The Library of Things We Forgot to Remember, is housed in a boutique shopping complex, 44 Stanley, in Johannesburg. It is built around his collecting practice focused on preserving archives and memorialising social and cultural history from southern Africa. He’s turned his own personal library and archive into a public art project.

It’s an idea informed by Chiurai’s obsessive interest in history and accumulation of artefacts such as books, pamphlets, zines, newspapers, vinyl records, political posters, audio recordings and other ephemera – materials that explore the relationship between cultural production and social movements.

The work takes a pointedly nontraditional approach to archivism. The selection and acquisition is determined by interaction. It is managed as a kind of commons where people can share and benefit from the artist’s collection and what is donated by others. Whereas most archives and libraries stress the preservation of materials, Chiurai’s library promotes access, physical engagement, and active use of the materials to maintain their continued relevance.

The library reflects Chiurai’s artistic repertoire, which deploys the use of mixed media to address social, political and cultural issues. It calls to mind his groundbreaking 2011 exhibition State of the Nation which explored conflict by constructing an African utopia that enabled him to merge forms and mediums, juxtapose political ideas, evoke historical figures – like a speech by slain Congolese independence leader Patrice Lumumba delivered by artist Zaki Ibrahim – alongside a performance by contemporary musician Thandiswa Mazwai.

In his work Chiurai imagines new ways to activate, share, present and reinvent the archives, as he does with his latest project, the library.

Initially, in 2017, The Library of Things We Forgot to Remember was of no fixed abode, usually incorporated into the artist’s own exhibitions. But the concept of a mobile library was altered by the COVID-19 pandemic, which restricted movement and live events. The library is about gathering, not just materials, but people. It is supposed to be a meeting place.

Now, Chiurai also invites others to curate this archive, to re-arrange it for regular public viewing in a rented space. He considers the library to be:

The collection has continued to grow. In 2018 it obtained digital recordings from the US-based educational project, Freedom Archives – radio interviews with political figures and women involved in the liberation movements in Zimbabwe, South Africa, Namibia, Guinea- Bissau, as well as the US civil rights movement. Other materials are donated by individuals and institutions. Accordingly, Chiurai treats these traces of struggle with great care. Some of these historical documents and posters are now framed and hung on the white walls. Once, these materials chronicled life in Black Africa or Black America as it happened. Now, they are artefacts of frozen moments in history. His library is conceived as a place of contemplation and reflection. There is a big green couch and listening stations.

The art of remembering

The Library of Things We Forgot to Remember is part of an effort to expand ideas of what a library can be and its decolonisation. It is an extension of new ways people are using the ‘library’ as a place of inquiry and conversation with the past.

Perhaps, what is fascinating is that Chiurai’s library is not static, but re-arranges in the hands of a guest librarian, and has travelled from its first iteration in Harare, to Cape Town, Kalmar, Södertälje and Johannesburg. Previous librarians have been the political writing platform Chimurenga in Harare, writer and DJ El Corazone in Cape Town, and film director and deejay Sifiso Khanyile in Johannesburg.

What Chiurai is doing is to incubate a new model for artistic creation and knowledge production that interferes with the circulation, display and preservation of cultural objects. Who has a right to assign value? Who decides what is history? What kinds of materials should be collected? How can access be expanded to new publics?

Visitors also have a responsibility. They are not just passive observers, but collaborators, interpreters, and readers. The library becomes a place of provocation that allows multiple registers of value, because value is negotiated. It’s also about the reinvention of the library as a space for multiple forms of contemplation. It is still a destination for artists, scholars, curators, and collectors to research and engage with southern African history.

Remembering is a virtue that Chiurai extols. In Black communities it is often an expensive luxury, a privilege. But through this new space arranged in the form of a hybrid gallery, community center, library and archive, remembering is translated into a collective process of reimagining and of sharing heritage. It is also testament of the generosity behind Chiurai’s art practice, of care and community.

We live in a world where facts and fiction get blurred
In times of uncertainty you need journalism you can trust. For only R75 per month, you have access to a world of in-depth analyses, investigative journalism, top opinions and a range of features. Journalism strengthens democracy. Invest in the future today.
Subscribe to News24
Next on Arts24
NAC fulfills grant payment to the National Arts Festival