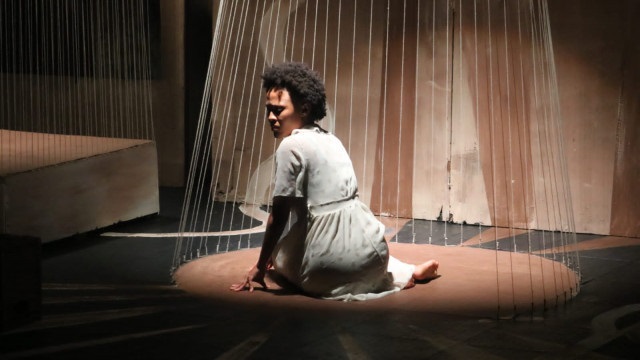 Written and directed by Leanetse Seekoe, Ruth is a story of duty. (Mark Wessels)

‘There is a sound to a woman who has never been loved,’ a mother says of her daughter. In Ruth, a poetic piece of physical theatre, a surrogate mother refuses to let her daughter touch her. She doesn’t touch her daughter either, except to hit her.

Stalking up and down on her solitary stage, she wails and proselytizes, shouting in SeTswana until she’s hoarse, bewailing the emptiness of her daughter’s life.

Ruth is empty of love, the mother cries.

But, oh, how the mother reveals her own lack of love whenever she howls about her daughter’s love-lessness while refusing to extend herself to her child. Ruth is a beautiful piece. The mother’s moans are met by the daughter’s own vivid imagery. Ruth tells of searching for love in the arms of men, of being ostracized for sleeping around, and of knocking at the hearts of men to open up to her love. But her knocks are hollow and her knuckles ache.

Ruth sits at the center of the stage with her back to the audience. Her white frock is mirrored by a white dress hanging at the back of the stage. The mother, the daughter, and the image of the child form a triangle of lovelessness. In the poetic narration and heightened dialogue, the story of generations of wise teachings unfold, but with a lack of healing. Each member of this family has been hurt by another. Death become familiar as hymns at a Sunday service. No one apologises. No one acknowledges anyone else’s pain, except perhaps to give a speech about the ways things should be done. ‘Genesis was a warning,’ Ruth says. ‘I thought it was an excuse, but I was wrong’.

The poetry in Leanetse Seekoe’s writing is alluring. Each phrase unlocks a link to the fuller picture. A picture of how two women can find themselves empty of mutual empathy. The daughter is petulant. The mother is unrepentant. Neither sees the other’s true feelings and the need they have for each other. Ruth, just as the famous bible story goes, is a story of duty. But what Seekoe makes acute in her unadorned directorial fashion, is a deep need for a healing connection between mothers and daughters. In stark movement to a ringing noise, Seekoe choreographs deep disconnection between the pair, and writes the disconnect within the pair’s individual selves.

Ruth wants her emptiness to be filled. It does not. It cannot. The mother wants a daughter who still follows her around and mimics her. She wants someone to adore not love for who she is. And so, Seekoe choreographs a still-point at the end of the play. The pair sit in the same individual spotlights throughout. And you imagine they will die in their isolation.

Ruth is a starkly poetic work, evincing the sound of lovelessness, which is not silence; the sound of two women who can never love is a sound that rings of continuous disturbance.

We live in a world where facts and fiction get blurred
In times of uncertainty you need journalism you can trust. For only R75 per month, you have access to a world of in-depth analyses, investigative journalism, top opinions and a range of features. Journalism strengthens democracy. Invest in the future today.
Subscribe to News24
Related Links
Sisonke Xonti becomes one with the sax at the Standard Bank Jazz Festival
NAF | Siya Charles Takes Her Chance
Libyan exile’s life captured vividly in 'The Colonel's Stray Dogs'
Next on Arts24
In a new take on looted bronzes Nigerian artists offer work to British Museum