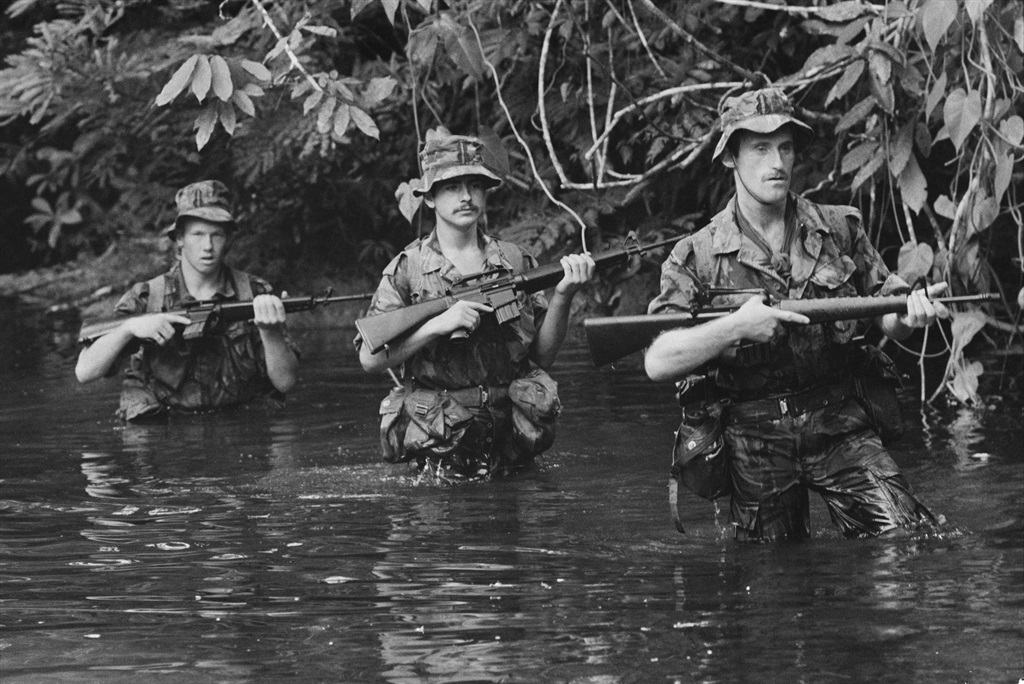 British soldiers on patrol in Belize, circa 1978. Belize is a former colony of Britain, now a multicultural and independent country, and has been pursuing relatively quiet acts of repatriation for decades. (Photo by Colin Davey/Getty Images)

People who write stories like these often invoke Erik Killmonger's powerful remarks about stolen artifacts in Black Panther: "How do you think your ancestors got these? Do you think they paid a fair price? Or did they take it, like they took everything else?" More commonly, they point to Indiana Jones' now famous declaration, "That belongs in a museum!"

As archeologists and heritage specialists from Canada and Belize, we offer an alternative commentary. We focus on communities of origin as agents of change both globally and locally.

Material past in the living present

Nations and people are increasingly participating in everyday actions of decolonisation and reconciliation, of which repatriation is just one element.

But what's more important are acts of local engagement and community-based initiatives in culture and heritage. These help pivot our understanding of the material past in the living present and work to break down power structures that intrude on peoples' rights and paths to self-determination.

The case of Belize

Belize is a former colony of Britain, now a multicultural and independent country, and has been pursuing relatively quiet acts of repatriation for decades. The country has also engaged in high-profile demands for restitution.

Community members work alongside Belizean and foreign archeologists at the local level to ensure that what led to the initial removal of material culture never happens again.

An early Belizean initiative involved the establishment of temporary and longer-term loan programs with foreign institutions. One of the first was with the Royal Ontario Museum (ROM) and the country's legally excavated archeological collection from the ancient Maya city of Altun Ha, which has since been mostly repatriated. Additional artifacts remain on loan and form the centrepiece of the ROM’s Maya collection and associated exhibits.

The Belizean government established the national Museum of Belize in 2002 following these early repatriations. Museum representatives and officials from the Institute of Archaeology arrange regular countrywide tours because not all citizens can readily access the museum.

They do this because access to tangible heritage — including artifacts that have been repatriated — helps connect people to the past and to their identities. This is essential to rebuilding and reimagining post-colonial Belize.

Belizean organisers and foreign archeologist-collaborators often pair these tours with locally planned cultural activities, like the Succotz Archaeology and Culture Fair that enables residents from smaller communities across Belize to engage with their people’s belongings and history, making it a part of their daily lives.

Establishing small community museums and cultural centres across the country is important because it allows communities the chance to highlight stories of their particular locales.

These organisations also participate in associated community-based heritage and cultural research, with, by and for Indigenous, descendant and local communities. The Crooked Tree Museum and Cultural Heritage Centre is a great example of a community-led educational initiative and research program that does just that.

Crooked Tree explores the deep and shifting history of the lower Belize River watershed, from the first local peoples over 10,000 years ago to the Creole community of today.

Professionally trained Belizeans now accompany heritage and cultural items when they leave the country for museums abroad. These individuals are active participants in recounting the artifacts’ life stories. They also ensure the items are appropriately cared for and respected physically and culturally.

In the recent travelling exhibit of Maya: Hidden Worlds Revealed, Belizeans acted as couriers and primary decision-makers. Along the way they have benefited from additional hands-on training in diverse exhibition and curation practices.

While these everyday initiatives aim to break down colonial power structures both at home and abroad, they are far from perfect. Issues of heritage and culture are fraught with complex power and identity struggles.

They can simultaneously trigger legal battles while also inspiring new collaborations. This happened recently at the ancient Maya city of Uxbenka.

Conversations of repatriation often fade to the background upon the point of return. Repatriation attempts to signal that wrongs have been righted, and attention shifts to the next artifact held captive. Local initiatives that create open access to archeology, artifacts and museums are the first step to decolonising institutions that have taken decision-making away from communities.

Before an artifact is even returned, heritage managers must work to repair centuries of divisive actions by building trust through collaborative projects.

Decolonisation and reconciliation work is slow because they represent the dismantling of centuries of colonialism and its legacies. What’s happening in Belize is a work in progress. Its citizens pursue diverse self-determined actions along with repatriation as steps toward generational healing and redress.

We live in a world where facts and fiction get blurred
In times of uncertainty you need journalism you can trust. For only R75 per month, you have access to a world of in-depth analyses, investigative journalism, top opinions and a range of features. Journalism strengthens democracy. Invest in the future today.
Subscribe to News24
Next on Arts24
SA art dealers weigh in on travel bans during Miami Art Week