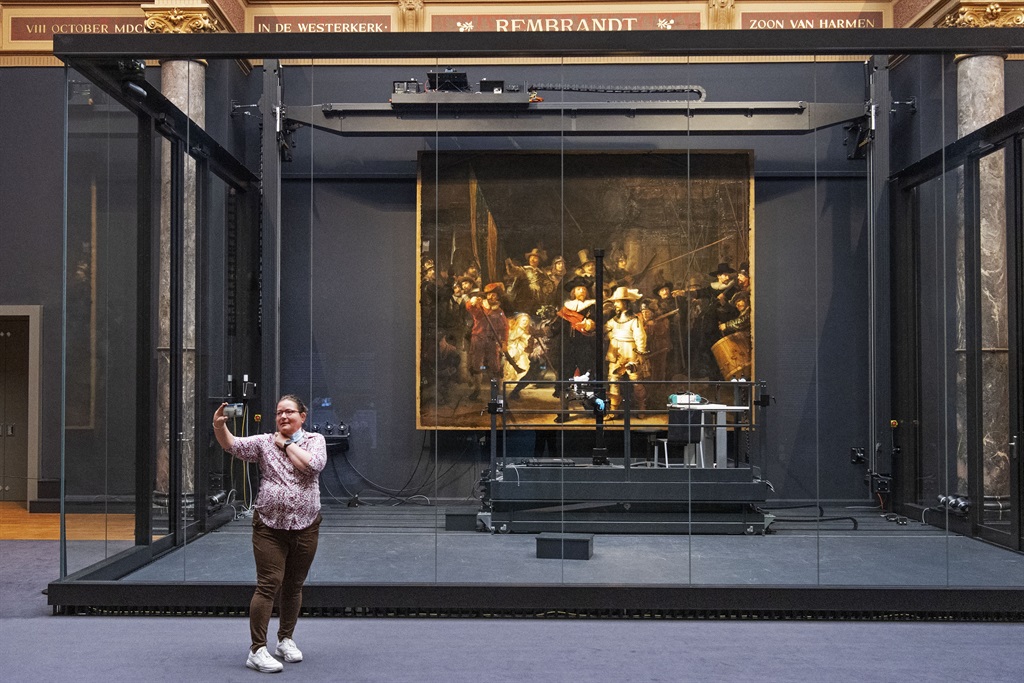 A visitor poses for a 'selfie' with 'The Nightwatch' painting by Rembrandt on display at The Rijksmuseum in Amsterdam on June 5, 2021. which along with other museums in the country has re-opened after a relaxation of coronavirus (Covid-19) rules after almost six months of closure. (OLAF KRAAK / ANP / AFP)

A sketch that has lain hidden for centuries under the thick layers of paint Rembrandt applied to create The Night Watch offers new insight into the Dutch master's creative process, museum officials said Wednesday.

Hailing a "breakthrough" in the understanding of Rembrandt's most famous work, Rijksmuseum director Taco Dibbits told reporters: "We always suspected Rembrandt must have made a sketch on the canvas before embarking on this incredibly complex composition, but we didn’t have the evidence."

The sketch reveals that the artist initially planned to paint feathers on one militiaman's helmet, and that he decided against including a sword that he had drawn between the two main figures.

"On the sketch, the feathers are clearly visible, on the painting not," said Pieter Roelofs, the Amsterdam museum's head of paintings. "

"Why did Rembrandt change his mind? ... We don't know," he said. "But probably he removed the feathers because they drew too much attention as Van Cruijsbergen (the militiaman) is in the centre of the painting."

Around 30 experts have been working on the 1642 masterpiece for two and a half years using cutting-edge imaging techniques and computer technology.

At Wednesday's news conference, the Rijksmuseum unveiled the findings of a first phase of the project aimed at understanding the artist's technique as well as restoring the massive work to its original brilliance.

"It is fascinating to see Rembrandt searching for the right composition" of the work, which is 3.8 metres high and 4.5 metres wide (12.5 x 14.8 feet) and weighs 337 kilos (740 pounds), Dibbits said. "We have discovered the genesis of The Night Watch."

Rembrandt van Rijn painted The Night Watch in 1642 after a commission by Frans Banninck Cocq, the mayor and leader of Amsterdam's civic guard, to depict the officers and other members of the militia.

Since the project kicked off in July 2019, millions of visitors have been able to observe the historic restoration work in real time at the Rijksmuseum, where it is protected by a glass casing in the centre of the museum's main gallery.

The painting has suffered many travails over the centuries.

In 1715, large chunks of the work were sliced off the edges so that it could fit into a new venue.

Thanks to a reconstruction based on a small 17th-century copy, the missing sections were restored to the work using artificial intelligence earlier this year.

The painting was stabbed by a man with a knife in 1911, was hidden in a bunker when Nazi Germany invaded the Netherlands, then was slashed by another knifeman in 1975 and sprayed with acid in 1990.

The current multi-million-euro "Operation Night Watch" is the most extensive research and restoration project to tackle the masterpiece.

In the next phase, which kicks off on January 19, experts will study deformations in the painting's upper left corner.

They will also decide whether to carry out a complete or partial restoration.

"In many areas the paint is still in an excellent state," the museum said in a press release, adding that other areas "are in poor repair... It is more than likely.. that the removal of varnish in the past led to the dissolving of paint at some locations."

Roelofs told the news conference: "The condition of the painting is what you would expect from an almost 400-year-old painting, but nowhere does the condition set alarm bells off."

Meanwhile, also on Wednesday the Dutch government said it would contribute 150 million euros ($170 million) to bring a Rembrandt self-portrait set to be sold by the Rothschild family back to the Netherlands.

Paris had said Tuesday that it would allow a sale on the open market even though the 1636 work titled "The Standard-Bearer" and valued at 165 million euros is classed as a "national treasure" in France.

If the Dutch parliament approves the 150 million euros of public cash, the Rembrandt Association would add 15 million euros to the pot and the Rijksmuseum would fund 10 million.