The Artist is Present: Bernie Sanders meme’d into Art History On 20 January 2020 Joe Biden was inaugurated as the 46th president of the United States.

The event marked the commencement of the four year term that sees Biden as president and Kamala Harris as vice president of the States.

Attending the inauguration were the likes of Barack Obama, Michelle Obama, Bernie Sanders, Bill Clinton, Hillary Clinton, George Bush and many others. While many were memorable, one of the most talked about attendees was Sanders.

Dressed in a Burton Gore-Tex coat, black trousers, dress shoes, a face mask and mittens, Sanders dressed for comfort. With social distancing stating that there be distance between seating, an impatient looking Sanders was photographed alone, perched on a black folding chair legs crossed and arms folded. Photographed in isolation, in an easy-to-cut-and-paste pose, Sanders became the stuff that memes are made of. From the Phillips Collection to Marina Abramovic, social media users responded to Sander’s presence at the Biden-Harris inauguration by superimposing him into art history. The Artist Is Present

On 14 March 2010 performance artist Marina Abramovic began her retrospective at the Museum of Modern Art in New York. Titled The Artist Is Present, the performance saw Abramovic silently sitting in a chair at MoMA's atrium. Every day she would sit in the chair as the museum opened its doors only to leave after the museum had closed. While she sat, the museum’s visitors were invited to sit in a chair facing Abramovic. Almost 1400 visitors sat in the chair. When the performance closed, the hours that Abramovic had spent sitting came to a total of 700 hours. Luncheon of the Boating Party

Set in a Parisan cafe overlooking the Seine, Luncheon of the Boating Party was painted by French impressionist Pierre-Auguste Renoir. Measuring 130cm by 173cm, the painting is one of Renoir’s largest works. Considered one of his most famous works, the people in the painting are friends to the painter including collector and historian Charles Ephrussi, poet Jules Laforgue, actress Jeanne Samary, painter Gustave Caillebotte, and journalist Adrien Maggiolo. Vincent van Gogh painted this work in 1888 while in Arles, France in mid-September. Although never signed by van Gogh, art historians are confident he painted it because he mentioned it on three occasions. A Sunday Afternoon on the Island of La Grande Jatte

Painted from 1884 to 1886, A Sunday Afternoon on the Island of La Grande Jatte is considered one of Georges Seurat’s most famous works. Demonstrating the pointillist technique where small, but distinct, dots form an image, the painting helped found the neo-impressionist movement. 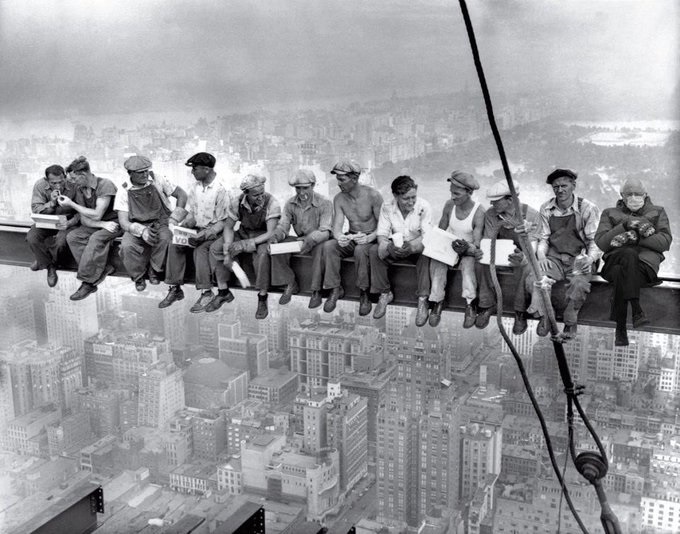 Lunch atop a Skyscraper

Taken in September 1932, this photograph sees 11 workers having lunch on a steel beam overlooking New York. Although the Great Depression was reaching its height, on West 49ths Street in New York, construction was under way for the 30 Rockefeller Plaza. These ironworkers, seen taking a break, are said to have been working on the plaza. According to the Washington Post, the photograph was staged and intended as advertising for the new building. Painted by Edward Hopper in 1942, this painting shows people in a diner on a late night from the perspective of a person outside the diner the light coming from the diner lights up the quiet dark street. Considered existential art, the work captures the alienation and loneliness of modern city life. Painted by Norwegian expressionist Edvard Munch in 1893, the composition’s original name is Der Schrei der Natur (The Scream of Nature). The painting’s horrified mood has for centuries stood as a symbol for the anxiety of the human condition.

The School of Athens

Painted by Italian Renaissance artist Raphael between 1509 and 1511, the work was part of a commission to decorate rooms in the Vatican. Art history considers it a symbol where art, philosophy and science met. It is referred to as a hallmark for the Italian Renaissance. Made between 1899 and 1901 by Giuseppe Pellizza da Volpedo, the painting is of a scene during a worker’s strike where demonstrators are on their way to negotiate for better working conditions. The Birth of Venus

Painted by Sandro Botticelli in the mid 1480s the work is of the goddess Venus arriving at the shore after her birth. Now a popular reference in pop culture, other renditions of the work have been used to sell Reebok sneakers and Adobe Illustrator software in addition to inspiring music videos for artists Beyoncé and Lady Gaga. Other versions have been used on the cover of The New Yorker.

We live in a world where facts and fiction get blurred
In times of uncertainty you need journalism you can trust. For only R75 per month, you have access to a world of in-depth analyses, investigative journalism, top opinions and a range of features. Journalism strengthens democracy. Invest in the future today.
Subscribe to News24
Related Links
'Cassette': A poem by Sihle Ntuli
'By Design': A poem by Sihle Ntuli
‘rhythmic, soft and even short’: A poetry Q&A with Sihle Ntuli
Next on Arts24
We can’t afford to forget Kenyan collagist Rosemary Karuga