The things we will remember about Jürgen Schadeberg 1958, Schadeberg is arrested for protecting a Drum magazine colleague. (Courtesty of Jürgen Schadeberg)
I did some research about African photographers but it was rather dispiriting. It seemed there were none … Finally, I discovered that the Bantu World used some freelance black photographers, but after meeting with them I remained disheartened. They knew very little about photography and expressed no interest in working for Drum. The trouble was that the few Africans I had met who were interested in photography had never had the chance to study it or work somewhere as trainees. There were no books on photography or photo magazines … It was true that some of the photo laboratories, of which there were few, had black technicians on their staff, but their experience was limited to making up chemicals, drying prints, dispatching them and general cleaning. They certainly did not know photography.
— Jürgen Schadeberg, The Way I See It: A Memoir

Photojournalist and documentarian Jürgen Schadeberg has died at the age of 89. His wife, Claudia Schadeberg confirmed his death over the weekend saying it was due to stroke related issues.

Spanning six decades, his major body of work is a collection of some 100 000 negatives including the iconic image of Miriam Makeba in the form fitting off the shoulder dress and the picture of Nelson Mandela looking through the bars of his Robben Island cell.

After being born and raised in Berlin, Germany, a nineteen year-old Schadeurg moved to apartheid South Africa to live with his mother and stepfather. A lesson in golf (Photo by Jürgen Schadeberg)

Once he settled in South Africa, Schadeburg took up a job with a printing company where he developed and printed amatuer photographs. Then after working at Werner’s Studio where he took portraits of mainly Afrikaner families, Schadeburg joined Drum magazine as its chief photographer, picture editor and layout director.

Upon gaining entry into Black communities as a member of Drum, Schadeburg’s camera captured some of the crucial moments in South Africa’s anti-apartheid struggle. These include the 1952 Defiance Campaign, the 1955 demolition of Sophiatown, the 1958 Treason Trial and the 1960 Sharpeville massacre. A GIFT FROM SATCHMO Masekela with the trumpet he received from US jazz legend Louis Armstrong in 1954. Picture: Jurgen Schadeberg 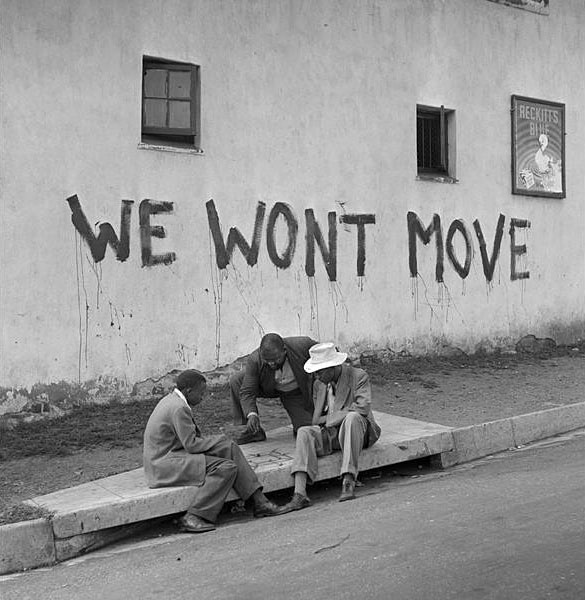 Waiting for the truck (Photo by Jürgen Schadeberg) Following his years at Drum Schadeberg joined Professor Phillip V. Tobias, the chairperson of the Kalahari Research Committee of the University of the Witwatersrand, on an expedition to study San people. During this expedition in the middle of the Kgalagadi Desert, Tobias’ team carried out a number of anthropological exercises on San people including weighing them, measuring their skulls, jaws, teeth and labia. The team also observed sacred rituals. As a result of the expedition the photographer published the book The Kalahari Bushmen Dance in 1982.

Many years later work from The Kalahari Bushmen Dance was prodded as a part of the 2019 Johannesburg Art Gallery exhibition All Your Faves Are Problematic. By being present and working with Tobias, Schadeberg appeared to be endorsing a racist anthropological practice that normalised objectifying San people.

He was also a man of such immense compassion, with a wry humour and unexpectedly shrill giggle that often camouflaged his profound empathy. Yet nothing could obscure his outrage at the horrific violations of human rights in his native Germany; nor in South Africa where he helped transform a hum-Drum magazine into Africa’s leading publication on politics, culture and brilliant journalism – both through pictures and prose.

Apart from being lauded for contributing alongside the likes of Santu Mofokeng, George Hallett, Alf Khumalo and Peter Magubane to archive pre 1994 South Africa, the shortcomings of Schadeberg’s practice and trajectory will continue to serve as a reference on photojournalistic and documentarian ethics.

Apart from his wife, Schadeberg is survived by his six children, 15 grandchildren and three great-grandchildren.

We live in a world where facts and fiction get blurred
In times of uncertainty you need journalism you can trust. For only R75 per month, you have access to a world of in-depth analyses, investigative journalism, top opinions and a range of features. Journalism strengthens democracy. Invest in the future today.
Subscribe to News24
Related Links
'I don’t want to live unnoticed’: pioneering Japanese fashion designer Kansai Yamamoto dies aged 76
'My beloved brother' | George Hallett remembered by his brother
Legendary drummer and afrobeat co-founder Tony Allen dies
Next on Arts24
Art Basel fair breathes life back into moribund market