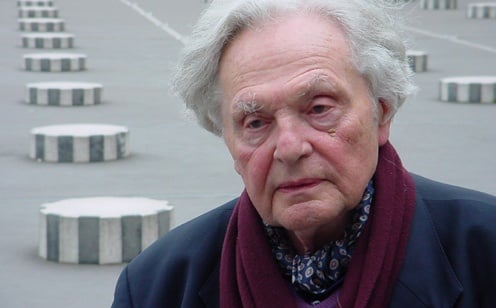 Frank Popper’s interest in the connection between modern art and technologies went on to influence generations of artists and theorists.

He is best known for documenting the rise of work that made use of interactive technologies meant to further engagement with viewers. He called it “virtual art”.

In an interview about virtualism with the University of Paris, Popper spoke about the development of this interest: “Contrary to most, if not all, specialists in the field who put the stress on purely plastic issues and in the first place on the constructivist tradition, I was convinced that the technical and technological elements played a decisive part in this art.”

From there onward, Popper’s interest in the connection between modern art and technologies went on to influence generations of artists and theorists.  Born in the Czech Republic, Popper worked as a textile engineer in Vienna before becoming a wireless operator in the Royal Air Force. After entering The Sorbonne University in Paris to study literature he quickly changed his mind and began writing about movement in visual art from as early as 1860.

The art world was able to usher in Popper’s way of thinking during the 1950s when kinetic artists like Frank Malina and Nicholas Schöffer came to the fore. His work was later reinforced by Op Art, the 1960s movement focused on the illusion of movement through manipulations of light and colour.

In 1968 the scholar published Origins and Development of Kinetic Art. The book traced his findings on the development of kinetic arts from Post-Impressionists like Vincent van Gogh to the mid-century. His second book Art—Action and Participation, published in 1975, looked at the role of what he called “spectator participation” in modernism. In 1993 he used his third book Art of the Electronic Age to argue that virtual artists’ viewer engaging pieces “humanised” technology. “What is new in virtualism is precisely its virtuality, its potentiality and above all its openness,” Popper told Nechvatal.

He will be buried in Paris’s Père Lachaise Cemetery.

We live in a world where facts and fiction get blurred
In times of uncertainty you need journalism you can trust. For only R75 per month, you have access to a world of in-depth analyses, investigative journalism, top opinions and a range of features. Journalism strengthens democracy. Invest in the future today.
Subscribe to News24
Related Links
'My beloved brother' | George Hallett remembered by his brother
Redacted portraits, temporary solutions: on the work of Lunga Ntila
George Hallett left an archive of pride and joy
Next on Arts24
On Narine Arakelian and why there’s more to her selling her eggs as an NFT than shock value