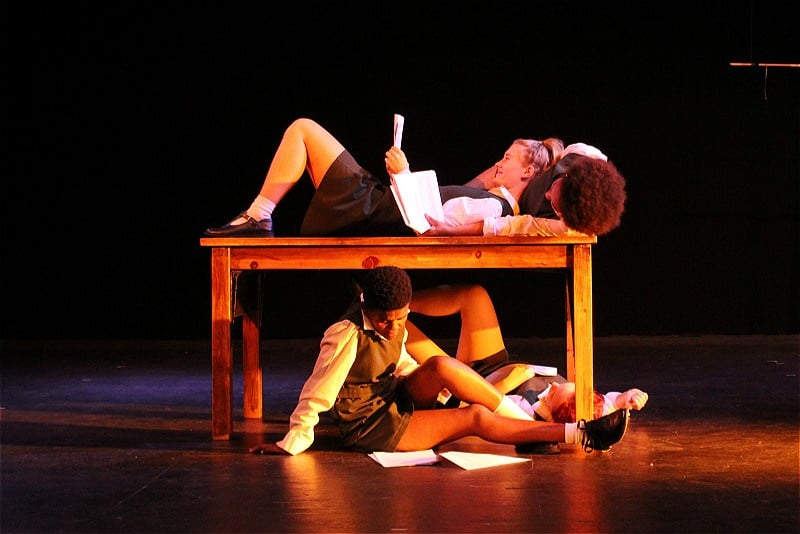 A Howl in Makhanda is a semi-autobiographical work about two black and two white South African teenagers at an elite all girls boarding school who break the rules and how the disciplinary board deals with each of them differently.

Having gone virtual for the first time in its 46 year lifespan, the (virtual) National Arts Festival presents its sixth day of 11, boasting over 270 shows in newly digitised offering. Viewers are able to access the festival by buying a R600 festival pass for the entire duration of the festival, or buying tickets for select events. Running completely virtual for the first time in the festival's 46 year history, the festival will be presenting work that speaks to these unique times, and will feature the results of many new collaborations, experimental forms and new ways to engage with the arts and audiences.

The crisis has gone through: health crisis, political crisis, economic crisis above all, but crisis has become a permanent state in DRC. From the place they live and dream, each of them tells his/her daily life, difficulties, worries but also survival strategies and hopes.

A HOWL IN MAKHANDA

Shortlisted for the CASA Award for woman-identified playwrights 2018, A Howl in Makhanda is a semi-autobiographical work about two black and two white South African teenagers at an elite all girls boarding school who break the rules and how the disciplinary board deals with each of them differently.

After an absence of 12 years from orchestral playing, Peter Martens has recently returned to the Cape Town Philharmonic Orchestra as their principal cellist. He shares Johann Sebastian Bach’s Six Solo Cello Suites which offer a guide to nearly everything a cello can do.

Saxophonist Linda Sikhakhane was born in Umlazi and began his musical studies with Brian Thusi and Khulekani Bhengu at Siyakhula, studying formally thereafter at UKZN. Endowed with obvious talent, which is matched by his equally impressive work ethic, Sikhakhane won the SAMRO Overseas Scholarship for Jazz Instrumentalists in 2016 and relocated to New York in 2017 where he enrolled at the New School University.

DEATH & BIRTH IN MY LIFE

Death and Birth in My Life invites the audience to listen in on a series of intimate conversations about the most moving and challenging experiences in life. *All shows are available from the day of their premiere until 16 July 2020.

Related Links
Collier croons and plays the cold away
Mamela Nyamza's Pest control is a protest piece that is deeply personal
Zoë Modiga's "Inganekwane" reflects on the myth of blackness
Share
Next on Arts24
National Arts Festival 2020: Day 5 Programme and Highlights