If you’ve noticed an uptick of male frontal nudity in TV and in movies in recent years, you’re onto something. (Photo: A scene from the film Color of Night. (Photo: Jorge Greuel/ Getty Images)

(Please note: This article contains content of a mature nature)

There are a number of factors fueling the current wave of frontal male nudity.

In the 1990s, premium cable television channels like HBO became more popular, while streaming platforms like Amazon and Netflix took off in the 21st century.

These channels and platforms aren’t governed by the Motion Picture Association’s ratings system, which strictly limits the circumstances under which the penis can be shown.

According to the ratings – which still regulate theater releases – penises can be shown in nonsexual situations, such as when they appear during a concentration camp scene in Schindler’s List. But if a scene involves sex and frontal male nudity, the actors have to be a certain distance apart. So when Bruce Willis’ penis briefly appeared during an underwater swimming pool lovemaking scene in the The Color of Night, the MPAA objected, citing his proximity to the woman, and the shot had to be cut. Uncensored versions of the film are now available on DVD.

Premium cable TV channels are not governed by these guidelines, and the HBO show Oz, which aired from 1997 to 2003, marked a major turning point. Set in a prison, it was notable for the sheer quantity of full frontal male nudity, with characters shown in a variety of contexts, including showering and in their cells, fully naked.

Some filmmakers, such as Judd Apatow and Sam Levinson, have said they’ve wanted to level the playing field by featuring more male nudity. 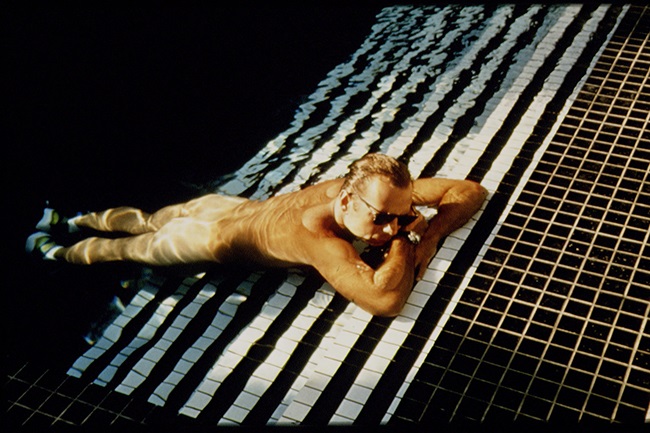 The proliferation of the prosthetic

Like Oz, Starz’s Spartacus, which premiered in 2010, was full of frontal male nudity.

However, there was a key difference: all the penises were prosthetic, which are made to be worn by the actors and look realistic when filmed.

Prosthetics were used on and off through the years. But after Spartacus, their use became the norm. Now in shows like HBO’s The Deuce and Euphoria, they’re everywhere. Sometimes they’re even digital. In Nymphomaniac: Vols. I and II, director Lars von Trier digitally replaced the actors’ penises with those from body doubles.

Whether they’re tangible or digital they tend to have one thing in common: they’re big. The obsession with size

The prosthetic penis gives filmmakers total control over its representation, and some have used its flexibility to directly address this issue of size.

Take the 2015 romantic comedy The Overnight.

Penis size is first introduced in the opening scene, when a couples has awkward sex due to the husband’s small penis. Later at a dinner party with another couple, penis size becomes the big issue again when a wife swap between the two couples is discussed.

The other man, played by Jason Schwartzman, has an extremely large one, while the man from the opening scene, played by Adam Scott, has a much smaller one, and becomes uncomfortable with the idea of being “exposed.” During a protracted skinny dipping scene, viewers get to see each actor’s prosthetic penis. Within the conventions of the romantic comedy, both couples are united at the end and committed to saving their marriages.

“The Overnight” attempts to deflate the myth that penis size matters. But at the same time that it tackles the obsession with size, it ends up reinforcing the notion – in part because of the opening scene – that bigger is better.

Similarly, “Euphoria,” a bold, experimental high school drama, also explores penis size, connecting the fixation on size to toxic masculinity. It shows how girls are also complicit by dwelling on size themselves – and assuming that it’s linked to sexual performance and masculinity. Adam Scott and Jason Schwartzman from The Overnight pose for a portrait at the 2015 Sundance Film Festival in Park City, Utah. (Photo: Jeff Vespa/WireImage)

Toward a more honest representation

“The Overnight” and “Euphoria” strive to critique our culture’s obsession with the penis, as do movies like “Boogie Nights” and TV shows like “The Deuce,” both of which are serious explorations of the pornography industry.

Yet by making the penis a central theme, these films and TV shows continue to grant it an aura of mystique and power that existed long before prosthetics and weaker regulations.

In the end, the use of prosthetics comes at the expense of the most mature thing filmmakers could do: show diverse, real penises in a manner that holds no special meaning for the character or plot.

While “Spartacus” would lead you to believe otherwise, all gladiators did not have big penises. Nor did their penis size and shape have anything to do with their strength, power, masculinity or sexuality.

Although apocryphal, Sigmund Freud supposedly remarked, "Sometimes a cigar is just a cigar," which was meant to suggest that cigars are not always phallic symbols.

It’d be nice if, on screen, sometimes a penis were just a penis.

We live in a world where facts and fiction get blurred
In times of uncertainty you need journalism you can trust. For only R75 per month, you have access to a world of in-depth analyses, investigative journalism, top opinions and a range of features. Journalism strengthens democracy. Invest in the future today.
Subscribe to News24
Related Links
The Kenyan film director taking on the world - with positive stories of Black life
It’s time for African Countries to take advantage of the moment and coordinate a decisive...
Ma Rainey’s Black Bottom: The visual history behind the new film
Next on Arts24
Interrogating the prominent but clumsy role of Black art in Sex and the City sequel