Racism, suicidal thoughts, tears: What we learned from Meghan and Harry's interview Meghan said an unidentified member of the British royal family made comments about how dark Archie, their son, would be. She refused to say who made the remarks. Harry said he would never disclose who said it.

Meghan said the royal family refused to make Archie a prince. Harry said no member of the family spoke out against racist articles about Meghan. Meghan, Duchess of Sussex talks with students during a visit to Tupou College in Tonga on October 26, 2018. Prince Harry and his wife Meghan are on day 11 of their 16-day tour of Australia and the South Pacific. (Photo by Kirsty Wigglesworth - Pool/Getty Images)

Meghan said she was so miserable as a royal that she considered suicide and self harm. She wiped away tears.

She said she pleaded for help from the family but none was given. “I just didn’t want to be alive any more,” she said. Prince Harry said his father Prince Charles, heir to the British throne, refused to take his calls at one point during the split.

“I feel really let down because he’s been through something similar. He knows what the pain feels like,” Harry said of his father. “I will always love him, but there’s a lot of hurt that’s happened.”

'KATE MADE ME CRY' 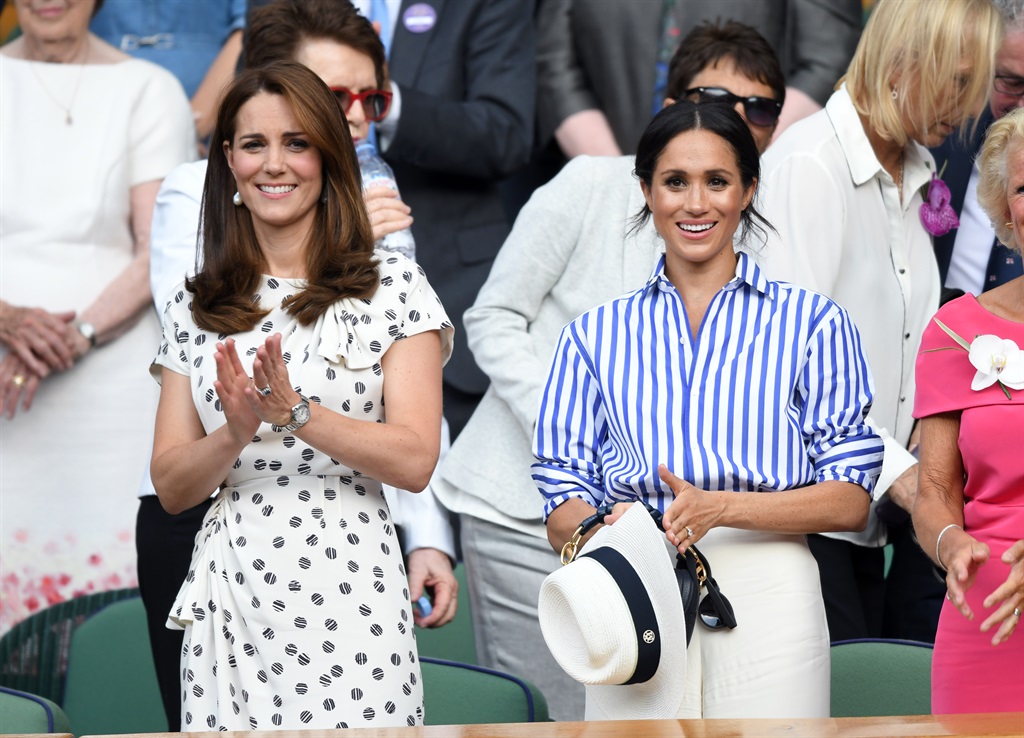 Catherine, Duchess of Cambridge and Meghan, Duchess of Sussex attend day twelve of the Wimbledon Tennis Championships at the All England Lawn Tennis and Croquet Club on July 14, 2018 in London, England. (Photo by Karwai Tang/WireImage )

Meghan denied newspaper reports that she had made Kate, the wife of Prince William, cry. Meghan said it was Kate who made her cry before the 2018 wedding over the dresses for the flower girls. In this photo illustration - a selection of British newspaper publications in response to the Meghan, Duchess of Sussex and Prince Harry, Duke of Sussexs interview with Oprah Winfrey on March 08, 2021 in London, England. The interview first aired in the US on Sunday 7th March on CBS and in the UK on Monday 8th March on ITV. (Photo by Chris Jackson/Getty Images)

Meghan said unidentified people in the Palace “were willing to lie to protect other members of the family. But they weren’t willing to tell the truth to protect me and my husband.” Harry said his biggest concern was that history would repeat itself - a reference to the death of his mother Diana who was killed in a 1997 crash as her car sped away from chasing photographers.

ROYALS CUT US OFF Harry said his family had cut him off financially and that he had used money left to him by Diana. He said he was particularly hurt that security had been denied to him and his family.

“I think she (Diana) would feel very angry with how this has panned out and very sad. But ultimately, all she’s ever wanted is for us to be happy,” Harry said. Queen Elizabeth II, Meghan, Duchess of Sussex and Prince Harry, Duke of Sussex watch a flypast to mark the centenary of the Royal Air Force from the balcony of Buckingham Palace (Photo by Max Mumby/Indigo/Getty Images)

Harry said he had not blindsided Queen Elizabeth, his grandmother, with news of his split with the family.

Meghan said the queen “has always been wonderful to me.”

CHARLES AND WILLIAM ARE ‘TRAPPED’ Harry said Prince Charles and Prince William were trapped in the monarchy.

“I was trapped but I didn’t know I was trapped,” Harry said. “Like the rest of my family are, my father and my brother, they are trapped. They don’t get to leave.” Prince Harry, Duke of Sussex and Meghan, Duchess of Sussex wave from the Ascot Landau Carriage during their carriage procession on Castle Hill outside Windsor Castle in Windsor, on May 19, 2018 after their wedding ceremony. (Photo by Aaron Chown - WPA Pool/Getty Images)

Meghan said the pair were married in a secret private ceremony three days before the official ceremony on May 19, 2018, in Windsor Castle. Prince Harry, Duke of Sussex and Meghan, Duchess of Sussex pose with son Archie Harrison Mountbatten-Windsor on March 08, 2021. The image follows their announcement during an interview with Oprah Winfrey that the couple are expecting a baby girl. (Photo by Misan Harriman/The Duke and Duchess of Sussex via Getty Images)

The couple revealed that their second child, with whom Meghan is pregnant, is a girl.

We live in a world where facts and fiction get blurred
In times of uncertainty you need journalism you can trust. For only R75 per month, you have access to a world of in-depth analyses, investigative journalism, top opinions and a range of features. Journalism strengthens democracy. Invest in the future today.
Subscribe to News24
Related Links
These 10 books were South Africa's highest selling fiction titles in February
‘The Parthenon Sculptures must be returned to their original owner’: George Clooney advocates for...
Indian Matchmaking: The divine cosmology of love with Sima Taparia
Next on Arts24
Extraordinary South African and African Films Come To Encounters