Shaleen Surtie-Richards and the power of integrity Shaleen Surtie-Richards’ body was discovered on Monday in a guesthouse she was staying in. (PHOTO: Gallo Images / Foto24 / Bongiwe Gumede)

Describing herself as a “full-on earthquake”, veteran stage, film and television performer Shaleen Surtie-Richards loved people, but she quipped that there were some she would have been happy to poke in the eye. Unequivocal in her values, she was unforgettable in her stage presence, whether it was in roles of great pathos or immense hilarity. She died suddenly in her sleep on 7 June during a shoot for kykNET’s telenovela Arendsvlei in Cape Town. She was 66.

Armed with her guttural laugh bubbled by a lifetime of smoking, her distinctive dimples and her implicit gentle toughness, Surtie-Richards rose to the attention of South African audiences with Fiela se Kind in 1988, a film directed by Katinka Heyns, in which she gave earthy life to the eponymous character in the Dalene Matthee novel. Her skin colour and her roots saw her typecast as a “brown maid”. But hers was an implacable dream to be out there in the theatre world and she ran with the stereotypes and honed her performances, rendering herself unique and cherished.

Surtie-Richards’ Fiela became a role model to so many young South Africans – and not only for the raw passion with which she reprised it, or the way she made the character a hero known and loved by more than the book-reading world. Shaleen Surtie-Richards with a poster for the 1988 Afrikaans film Fiela se Kind, in which she played the title role. (Photograph by Gallo Images/ Foto24/ Cornel van Heerden)

As Surtie-Richards developed her career and her repertoire, so did she, in turn, become an icon for millions of people who nursed their own dreams of their specialness quietly and out of harm’s way. She was a performer with the skill to reach to the heart of a character and lend it humanity that was incomparable.

Fiela se Kind is a quintessential tale about racial bias. Surtie-Richards’ place in it redefined what it meant to be a South African. It was the late 1980s and the country was in the relentless grip of a state of emergency, but she brought to audiences on the ground the notion of love that overreaches imposed boundaries. An appreciation of the story was not about political machinations in the air – rather, it was about real notions to which the average film-watcher could relate.

Some 30 years after her interpretation of Fiela in film, she had the priceless opportunity to revisit the character on stage, which she cherished. It was performed under the direction of Frans Swart and staged nationally to full houses.

As Ester “Nenna” Willemse for 18 years on South African television soapie Egoli – Place of Gold, she found a place in everyone’s heart. And the hilarity of an encounter between Nenna and Elsa (played by the late Hannah Botha) over some weed cookies remains at the top of the scale of comedic timing and empathy with the stoned.

Her career trajectory contains a list of theatre credits that beggars belief given her difficult financial circumstances towards the end of her life. From works by Pieter-Dirk Uys to those by William Shakespeare and from pantomime to local television shows, Surtie-Richards was a dab hand at it all. She honed her skill with impeccable trust in herself and her character, allowing it to bleed into a universal sense of realness that everyone understood. The actress performing in Rondomskrik at the Klein Karoo Nasionale Kunstefees in Oudtshoorn. The play originated with the rape and murder of 17-year-old Anene Booysen. (Photograph by Gallo Images/ Sunday Times/ Esa Alexander)

With an adoration for fabulous false eyelashes and an ability to swear and laugh like no one else, Surtie-Richards deemed Kathy Bates the actress she revered most. But she claimed her elderly mother, who died in 2014, as her role model. Indeed, it was her mother who encouraged her passion for performance.

Surtie-Richards qualified as a kindergarten teacher and worked for the then Department of Coloured Affairs, which had started an amateur theatre group. She joined it “net om haar te please (just to please my mother)” and the bug bit hard. Between 1974 and 1984, Surtie-Richards took part in amateur theatre productions, until she had earned enough of the industry’s respect – and enough confidence of her own – to take on the big guns.

For the love of her craft

Born on 7 May 1955 in the Northern Cape town of Upington to a couple who were both educators, Surtie-Richards was schooled in Cape Town and developed her own performance acumen. Because she was not white, she was not allowed to be admitted to music school and learnt piano and ballet privately.

Her performance as Hester in Hallo en Koebaai (an Afrikaans version of Athol Fugard’s play Hello and Goodbye) earned her a Fleur du Cap Theatre Award in 1985, the first of over 40 accolades from the industry. Shirley in Shirley Valentyn (Willy Russell’s Shirley Valentine of 1989) was another iconic character she brought to what was then referred to as the  coloured community and broader South Africa in 2009, lending veracity and character to a timeless and outrageous fictional woman. 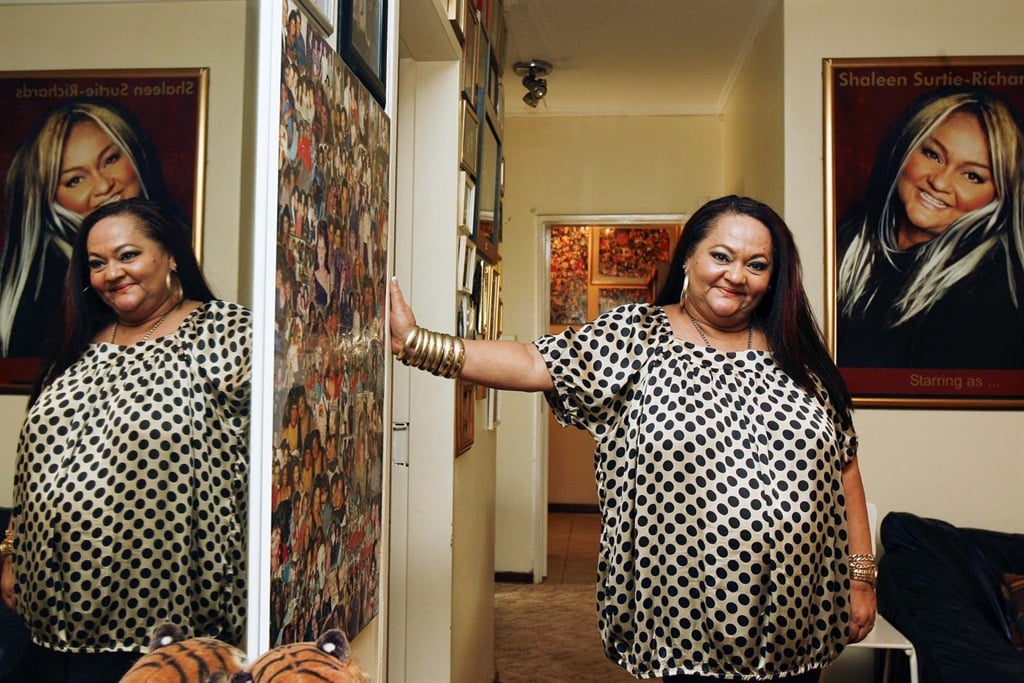 Shaleen Surtie-Richards during an interview. She played the role of Nenna in the television drama Egoli – Place of Gold for 18 years. (Photograph by Gallo Images/ Foto24/ Bongiwe Gumede)

Surtie-Richards was very fierce in proclaiming that fame, fortune and glory were not the reasons to be in the theatre industry – that it was about the craft itself. Ironically, this was a dictum that found her financially destitute and without the comfort of medical aid. She was told that her health was precarious and that she needed to be in hospital, but it was a luxury she, alas, could not afford.

Her Pekingese dogs, Tatiana and Tristan, gave her the unconditional love that was not possible to get from human acquaintances, she said in an interview.

In a statement to the media, the Surtie family said: “We have lost a sister, an aunt, a cousin and a niece, and we are trying to process, to come to terms and to still our broken hearts.”

Surtie-Richards does not only leave behind her family but also a whole country – and diaspora – of fans in deep mourning.

We live in a world where facts and fiction get blurred
In times of uncertainty you need journalism you can trust. For only R75 per month, you have access to a world of in-depth analyses, investigative journalism, top opinions and a range of features. Journalism strengthens democracy. Invest in the future today.
Subscribe to News24
Related Links
Remembering Pat Mokoka of the Malopoets – seminal South African music
An unyielding kind of twinkle – Thando Hopa on albinism and strength beyond all odds
Museum of Modern Art condemned by an exhibiting artist
Next on Arts24
'Lizard’ and other compelling shorts to watch at the DIFF