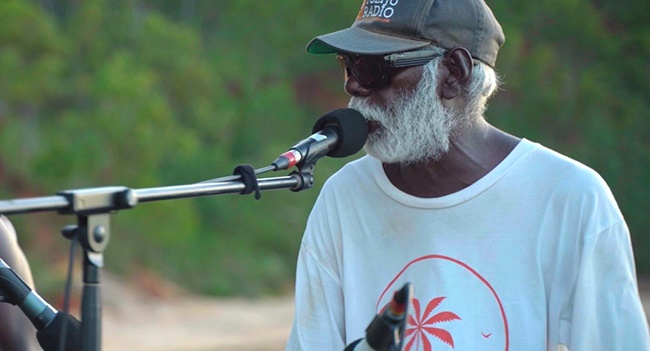 Musician Andrew Gurruwiwi usually performs for a few hundred people in Australia's remote far north. But during the virus shutdown his audience has swelled to nearly 120 000 around the world.

Gurruwiwi's eponymous band is the breakout success of a series of concerts being broadcast online while the coronavirus pandemic has seen Australia's indigenous communities tightly sealed off from the rest of the country over health concerns.

East Arnhem Live featured Gurruwiwi performing a 20-minute set against a backdrop of exposed red-and-white bluffs and the setting sun.

"All this coronavirus that's been happening here means no shows, no music, no anything," the artist told AFP, adding the shows were launched to "make people happy".

Musicians around the world have migrated online after Covid-19 forced venues to close.

But organisers in Arnhem Land say the response to virtual performances from the isolated corner of Australia's Northern Territory has far surpassed expectations, reaching tens of thousands of fans weekly who otherwise may never have engaged with the local Yolngu culture.

"It was sort of hard to comprehend that we could... get so many hits and so many people into it. And we've had pretty solid numbers the whole way through," Yolngu Radio's Nicholas O'Riley said.

"It's incredible to watch when we do the livestream on the Saturday nights, and people commenting on where they're watching from, from right around the world and from all around Australia."

Viewers from Spain to Canberra have posted comments.

O'Riley said East Arnhem Live was originally designed as a four-concert series to help keep the local 10 000-strong community digitally connected during the pandemic, but was later expanded to nine events as the shutdown dragged on.

Gurruwiwi's band sings in both English and their native Yolngu, which he says offers an opportunity to spread messages about his people's suffering at the hands of colonisers to younger people still learning the history as well as new audiences from as far afield as France, Germany, and the United States.

"To me, some balanda (outsiders) don't understand... what Yolngu has been going through all those years ago," he said.

"So the world wants to know about our story, we share our story and knowledge about the Yolngu people from Arnhem Land."

The Andrew Gurruwiwi Band is one of eight acts that has played the concert series to date - the finale this Saturday features internationally successful band Yothu Yindi with the performances not only offering exposure but also an income stream after local festivals were cancelled. Close-ups of the artists playing are interspersed with drone footage of sparkling green-blue seas meeting white sand beaches and craggy red cliffs topped with thickets of trees - doubling as a tourism campaign for the picturesque region.

Local tourism officer Ryley Heap said he hoped the concerts would attract a new wave of visitors once travel resumes.

"The region in general is quite unknown, and as unknown as it is, it's also untouched - it's pristine here, it's absolutely spectacular," he said.

"We certainly would like to showcase it more, and we have done that through the performances, so hopefully there is a flow-on effect."

On East Arnhem Land's official tourism website it states that "the entirety of East Arnhem Land is Aboriginal land granted under the Aboriginal Land Rights (Northern Territory) Act 1976, an important acknowledgement of the continuing ownership of, and connection to country".

Gurruwiwi has post-lockdown plans of his own, hoping to eventually perform live in front of crowds as big as his digital following.

"100 000 would be the best. I'd like to make a concert somewhere, with thousands of people to watch and listen to my music, just give them understanding of my story."