Nombuso Mathibela says she applies the same curiosity and devotion to words and histories that she does to her collecting and archival practices. (Photo by Nonku Phiri)
Nonku Phiri

How did you wake up feeling today?

Like it’s the sort of day that requires a morning dedicated to Stevie Wonder’s Songs In The Key of Life, quite pleasant.

When we first spoke, you referred to yourself as a researcher and a vinyl collector. Can you tell me more about the research you have done and continue to do?

The same curiosity and devotion I have for words and histories bleeds into my collecting and archival practices. It brings me joy and pulls out the parts of me that I enjoy the most.

Between 2016- 2018, I spent a lot of time looking into nationalism and its most epic performance in Africa. At the time I was motivated by a desire to understand the footnotes of nationalist discourse and human lives that were disappearing from the consolidation of nation states in the sixties. In order to get to the heart of things, I had to truly understand the spectrum of nationalist formation and this inquiry bought me back to West African francophone music.

Where and how your two practices meet, as a collector and research?

So, collecting is a key catalyst and organizing principle. Essentially, even a study of trade unionism in South Africa involves some sort of interaction with the records that were pressed by cultural wings of these formations. There is little depth in this study without art. For instance, my interest in Zimbabwe’s chimurenga includes record pressings of that time, Namibia’s SWAPO freedom songs or the recordings about Samora Machel’s era and speeches. This space has been deliberately curated to foster an organic relationship with sound in a way that allows it to weave through my work.

How and why did you get into the practice of collecting vinyl?

I’ve always been surrounded by collectors of all sorts of musical treasures, but vinyl came at a very late stage in my life. It started at a house in Alfred street, Cape Town. My friends Thuli, Ntokozo, Ru and Asher lived together in this house that became some sort of sanctuary and ritual for me. Some of them were heavily collecting vinyl and digital at the time and we would spend endless nights listening to anything from Curtis Mayfield, Abdullah Ibrahim, John Coltrane, Keith Jarrett, Batsumi, Eric Dolphy, Albert Ayer, Tete Mbambisa, Ali Farke Tore, Alice Coltrane, Busi Mhlongo and many others.

We would go through archives of black classical music and I would say that this period got me into collecting. In fact, I was gifted my first vinyl by my sister friend Khadija called The Search, a beautiful collection of stories and speeches from the Black Arts Movement. Vinyl collecting became a way of entering the lives of others and a way of entering music histories that I couldn’t always access on digital platforms. I started buying records for the liner notes, to connect conversations and the trajectory of jazz, the tensions inherent its existence and to understand the strides that Black musicians have made against categorisation. Vinyl had an intriguing presence, a rabbit hole of sorts and quite frankly the perfect form. A look at some of Nombuso Mathibela's favourite from contemporary labels like Mushroom Hour Half Hour, International Anthem and On The Corner Records. (Photo by Nombuso Mathibela)
Nonku Phiri

What’s in your collection?

I collect according to particular sounds and forms, so you’ll find a lot of ensembles, arkestras and big band from Horace Tapscott, to Bembeya Jazz Nation and Egyptian jazz bands, to South African Trade Union Worker Choirs.

I also have quite a few new releases from contemporary labels like Mushroom Hour Half Hour, International Anthem and On the Corner Records.

And what informs your acquisitions?

My style is definitely not informed by the sort of detail that I see in some collectors I know who have to collect the entire catalogue of specific musicians. There are different methods and sensibilities, so in as much as you will find mbira music, highlife and juju, you will also find Gary Bartz, revolutionary spiritual jazz from the city of Houston Texas led by drummer, bandleader and activist Bubbha Thomas. I definitely have a humble shrine of Congolese rumba that I would love to expand if it wasn’t so inaccessible and quite frankly hoarded by the French vinyl scene.

Specific string-based instruments also guide my collection there are records from Kante Manfila to Ahmed Abdul-Malik. At the moment, I’m obsessed with Japan’s free jazz movement from the early sixties but these records are extremely hard to find and quite expensive. So, compilations are some sort of middle ground for me. Lastly, Archie Shepp and Pharaoh Sanders are constant features not only for the music but for some of the most beautiful covers! It sounds super eclectic but there is symmetry, charming energy and soulful order that usually comes out when I am in the mood to play.

Tell me a story about the first thing music taught you?

I live a relatively recluse life and music has been at the centre of this disposition, which allows me to orbit around sound. It has taught me how to be with myself and in Zora Neale Hurston true form, it also taught that standing on the peaky mountain wrapped in rainbows, with a harp and sword in my hands is very necessary.

Now can you tell me about the last thing that music taught you?

At the moment, music is teaching me that we need to feel and dance furiously through crisis.

What’s the process you go through to make a mix?

My process usually starts with an intimate listening session. Mix ideation usually happens through communion with close people. Almost all the tracks that I include have a label, a particular tone and feeling that reminds of a person, place or experience. It’s very similar to how I approach collecting.

Each record I own has its specific meaning and potential in my life. In principle I’m always in search of a particular sound, world and feeling, so I collect and mix around that organising principle. Last year I rekindled my love for percussive sounds and that led to a deliberate collection of Surinamese music and old field records from the Caribbean.

I’ve also been so obsessed with the co-creative love letters between American jazz and North African musical traditions. Right now, these are the sort of dominant palettes in my process. Mixing is one way of sampling histories beyond the confines of time, borders and other constraining attempts to undermine healthy and radical human social production.

Let’s talk about your most recent public mix, Fly Machine Sessions Presents "Bakkie for Hire". Why the name and what work was the mix meant to do?

When Vusi from Fly Machine Sessions asked me for a mix it was a no brainer for me. I have never come across someone with such a lucid lexicon of South African musical traditions. That platform for me and many others is the sort of public music library we deserve. The mix that I did for them landed quietly softly in perfect company and contemplation.

It was completed in the early months of lockdown and grew out of listening sessions with friends before this pandemic. I decided to move quite vastly in and out of South Africa’s musical canon to sort of insist on a Pan-African lens, to encourage furious dancing in all forms, shapes and tempos.

I wanted people to feel enough to be able to dance to Horace Tapscott as they would move their waists to Congolese rumba or feel like praying when they hear Pharoah Sanders and Maleem Mahmoud Ghania’s gnawa trance prayer notes in as much as they would when they listen to the last track titled ‘the Prayer’ by the World Experience Orchestra recorded in the basement of a Boston church in 1975 and led by a sublime bassist, composer John Jamyll Jones. 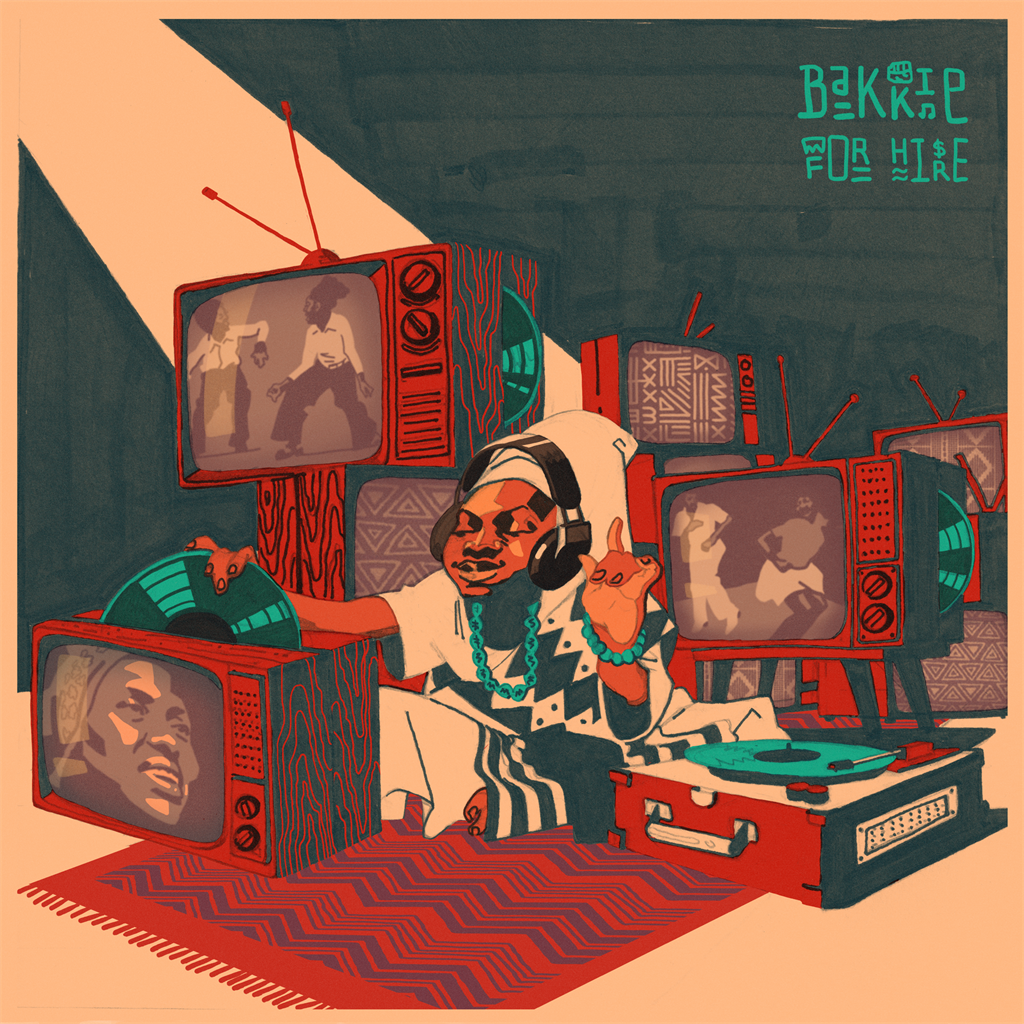 I am notoriously known among close friends for being a hoarder of long sided vinyl, super short field recordings and trade union choral music. In the process of making this mix I had to reckon with the fact that not everyone has a capacious spirit for long stories and that’s okay!

I also wanted to pay homage to our ability to walk the tight rope of crisis and to recognise how we have been able navigate this forced landing with unbridled wit and humour. [The mix is] an anecdote of a time that has marked us all with a sense of uncertainty and study of how we wish to proceed in a world that is clearly not working. It’s meant to be a soothing sultry requiem for the many losses, both seen and unseen, ways of dying that many people are experiencing in their intimate lives.

I’m also very grateful to friend and phenomenal artist Pola Maneli for joining me on this project and creating an artwork that communicates the different shades of this mix with so much beauty, unrivalled technique and soul. I think he also described it perfectly, ‘I felt like I was lounging next to someone on a couch or patio and watching them channel hop across various pan-African tv stations on an amazing Sunday afternoon’ – generally, Sunday is the champion day of any week for me.

Pola: does the mix have a title yet? Me: Not yet *one minute later* Hey lol it’s ‘Bakkie for hire’ driving in front of a car written that right now lol.
about the title, this short exchange with Pola Maneli sums it up:

I suppose in some way, the idea of being able to hire a bakkie to travel in and out of different sonic terrain and feelings became one super seductive and organic motivation.

Before we close I want to get into the concept of groove being revolutionary. Do you subscribe to that thinking and, if so why?

I think groove or dance is necessary in the process of revolutionary act, but it doesn’t always have to be on the nose for it to be valid. If we truly believe that freedom is a practice, some sort daily exercise, then how people choose to express themselves is pure politics. I really believe in what Alice Walker calls holding the line of beauty, form and beat. Hard times require furious dancing. And that dancing at some point is something that we learn to be very basic for maintaining balance. However, groove or dance is certainly most dangerous when it is aligned with a collective class consciousness.

Lastly, I like to think of the act of remembering and reminding as warfare. That’s why I think of art, literature and especially music as important weapons and shields. What’s your take on this?

To some degree the purpose of art is to interrogate this reality so deeply that it becomes difficult to separate the world from all forms of text from literature to music. Forgetting is not a necessary condition nor it is possible I don’t think we can ever move completely away from Nina Simone’s chain gang. Actual freedom possibly lies in being able to remember differently: in a way that doesn’t invoke powerlessness. If we hold Amiri Baraka’s words to be true that art is the weapon in the struggle of ideas, then I would say in its entirety, the Black classical tradition has to our greatest source of strength and I think in it lies many articulations of the elephant in the room or rather the shadow in a way that affirms our personhood.