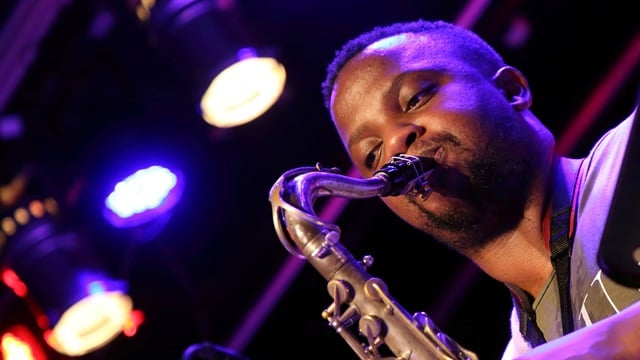 Jazz composer and reedman Sisonke Xonti has found himself where, like every serious artist, he has nowhere to go but deep into the wilderness of his heart to discover his own worth. If he is any good, he finds the map to the philosopher’s stone.

Going into his headline performance at the Standard Bank Jazz Festival, Sisonke was dogged by fate’s curve ball; he is the longest reigning Standard Bank Young Artist of the year for Jazz, thanks to the impact of the Covid-19 pandemic on cultural life. However, this has gifted Sisonke the time to outgrow the frills and trepidation that comes with the award’s expectations. The strictures that often come with decorum and ceremony seem to have given way to creative abandon.

He seems to have found the courage of his creative convictions. This virtual National Arts Festival concert, as a second take on the SBJF stage as reigning Standard Bank Young Artist, is nothing short of an epoch-marking performance in his developing career.

The man eschews the regular appeal to simply show us he can compose good songs and play them just as well. Here Sisonke blazes with a bold and brilliant modal path. He gives us music that is driven by harmony as opposed to the usual allure of sweet melodies. He yields to the potential power of his playing as primary and paramount.

If the rhythm section is especially deployed here to charge up the musical firmament with requisite fiery spirit, Sisonke’s reed is called to soar in search of something serious and sacred. This is an experiment in intensity and ecstasy. It’s success is co-authored by a fitingly impeccable rhythm section that keeps his lead honest at every turn.

The incomparable Ayanda Sikade is on drums to ride a riotous righteous rim shot through the musical moment. Pianist and composer Nduduzo Makhathini is here too. He plays with clarity and considered calculation, in turn sparing and deftly colourful. Further, Nduduzo’s message is tried and true: nothing says modal better than the Tyner’s proverbial fourths. It lends a touch of magic and mystery to the music. This is because when voicings of chords are stacked in fourths and stripped of thirds, fourth chords develop a mysterious stasis, becoming neither major or minor. This openness has a vibe of possibility. It’s a metaphor for larger ideas that is as life affirming as any lofty humanist proposition.

Then there is bassist Dalisu Ndlazi, who over the last few years has been earning his seat at the table. This gig with the quartet marks his arrival. Those who’ve seen him grow through the ranks since he first gained national notice at the Standard Bank National Youth Jazz Festival, welcomed his growth, signalling the festival’s annual workshops are an indispensable cauldron for cooking up talent in our country.

Sisonke’s concert comprises compositions contributed by the various members of the ensemble, some new cuts from Sisonke himself and a new arrangement of an older piece. Gaba, which first appeared on his debut record, Iyonde, is here submitted to Sisonke’s bold if not lofty musical motivation.

To be honest, there have been signs that Sisonke was to be taken seriously as a would-be master sax-man. Notable among these are a memorable solo on Benjamin Jefta’s Homecoming. Some have even argued that the quality of his playing and the boldness of his sound are central to what places that record on the roll-call of mzansi’s contemporary jazz albums.

Sisonke’s own debut album as a band leader was also a clear announcement. The follow-up record, uGaba-The Migration, confirmed him as a clear-thinking composer and arranger. If Sisonke was merely a saxophone player before, this concert marks him as something much more: the jazzman has become a saxophonist. He and the horn are one!

This article was first published byThe Critter. Arts24 has partnered with the National Arts Festival to bring you exciting content before, during and after the 11 day festival.

We live in a world where facts and fiction get blurred
In times of uncertainty you need journalism you can trust. For only R75 per month, you have access to a world of in-depth analyses, investigative journalism, top opinions and a range of features. Journalism strengthens democracy. Invest in the future today.
Subscribe to News24
Next on Arts24
What kind of art does Drake collect?