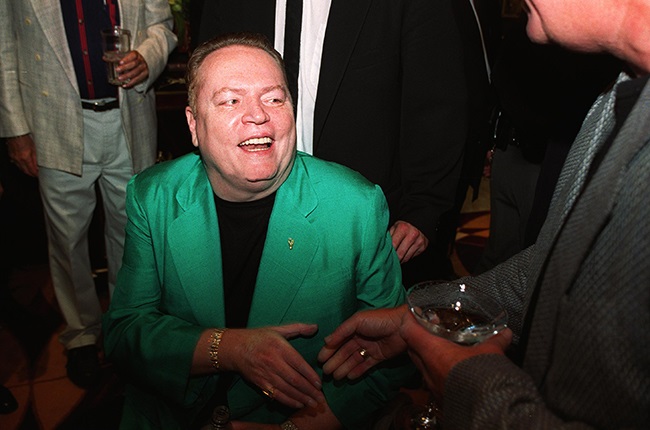 "He passed quietly in his sleep at Cedars-Sinai Medical Center with his wife Liz and daughter Theresa by his side," said Minda Gowen in a statement to AFP, referring to the Los Angeles hospital.

Flynt died "from the recent onset of a sudden illness," the statement added, without specifying the cause. Various US media outlets have reported Flynt died from heart failure.

A self-described "smut peddler with a heart," Flynt rose from abject poverty to run a vast adult entertainment empire. He published the first issue of Hustler Magazine - created as a lowbrow, explicit counterpart to magazines like Playboy - in 1974.

Sales skyrocketed a year later when it ran a nude photo of former first lady Jacqueline Kennedy Onassis sunbathing on vacation, and Flynt raked in his first million.

In 1978, Flynt was paralysed from the waist down after he was shot by a white supremacist angered by interracial sex photos that ran in Hustler. This resulted in an on-and-off addiction to painkillers over the years.

Flynt's empire was estimated to be worth between $100 million and $500 million.

His other enduring legacy is as an outspoken free-speech advocate and the man behind Hustler v. Falwell, a 1988 case in which the Supreme Court ruled that the US Constitution protects writers and artists that mock public figures.

The case overturned a $200 000 libel judgment against Flynt for "emotional distress" inflicted on conservative US televangelist Jerry Falwell.

The offending article was a parody ad that ran in Hustler suggesting that Falwell's first sexual encounter was with his mother in an outhouse.

The Supreme Court case and Flynt's life was immortalised in The People vs. Larry Flynt, a 1996 Hollywood film directed by Milos Forman and starring Woody Harrelson.

"I must admit that I never bought Hustler magazine, and I believe I never will," Forman wrote in the introduction of Flynt's 1996 autobiography entitled An Unseemly Man: My Life as a Pornographer, Pundit, and Social Outcast.

"But, as long as I live, I will always admire Larry Flynt: his life, his courage, and his tenacity."

Larry Claxton Flynt Jr was born 1 November, 1942 in Lakeville, a hamlet deep in the mountains of Kentucky. He was the oldest of three children.

His young parents split up soon after his father returned from World War II, and Flynt joined the army with a fake birth certificate at age 15.

He briefly worked at an auto plant, then joined the navy for five years.

When he came home, he bought a bar and turned it into a strip club, which was so profitable that he soon opened a chain of strip joints, employing up to 300 women.

He founded Hustler Newsletter in 1972, a black-and-white publication with news about his clubs of the same name alongside explicit photos, which two years later evolved into a glossy magazine.

Most distributors initially shunned the publication, and Flynt spent years battling obscenity charges for his graphic photos in several states.

"I have been reviled, prosecuted, imprisoned, and shot. I have spent half my life, it seems, in court. I have survived years of the worst physical pain any human can endure," Flynt wrote in his autobiography.

He was married five times and had five children.

In later life, Flynt dabbled in politics, briefly running for US president in 1984 as a Republican -- causing alarm with a suggestion he would include X-rated Hustler clips in his campaign ads -- and later for California governor.

He supported Bill Clinton during impeachment proceedings, accusing the Democratic president's critics of hypocrisy and offering financial rewards to women who could prove they had had sex with other Washington lawmakers.

In 2017, Flynt offered $10 million for dirt to help remove US president Donald Trump from office, running a full page ad in The Washington Post.

Flynt even unexpectedly "became friends" with his longtime adversary Falwell after meeting in 1997 on CNN's "Larry King" show.

The rapprochement "was one I never expected and was just as shocking a turn to me as was winning that famous Supreme Court case," Flynt later wrote.

Allan MacDonell, who worked for Flynt Publications for nearly 20 years, wrote a kiss-and-tell book that portrayed his ex-boss in an unflattering light.

Flynt told The New York Times that he was not offended. "That's ridiculous," he said.

"I'm the King of Slime. How could anyone say anything that would besmirch my reputation?"

We live in a world where facts and fiction get blurred
In times of uncertainty you need journalism you can trust. For only R75 per month, you have access to a world of in-depth analyses, investigative journalism, top opinions and a range of features. Journalism strengthens democracy. Invest in the future today.
Subscribe to News24
Related Links
TikTok star Dazharia Shaffer, 18, dies
Co-Founder of The Supremes, Mary Wilson, 76, dies
Next on Channel24
Brad Pitt is rocking a ponytail so teeny-tiny you have to see to believe it