A cautionary tale about the queen's mysterious handbags: 'We never touch the bag' Capricia Penavic Marshall, who is the former chief of protocol for the United States and worked for both Bill Clinton and Barack Obama, recently shared the hilarious way she found out you simply do not touch the queen's bag.

Speaking to People upon the release of her new book Protocol: The Power of Diplomacy and How to Make It Work for You, she described a visit to Buckingham Palace with President Obama and Michelle Obama in 2011 in which she instinctively move forward upon seeing the queen to offer to take her bag as she is accustomed to doing.

But protocol isn't quite the same across the pond.

"As Her Majesty walked out, I made a comment to my counterpart. I said, 'Oh, my goodness, Her Majesty has her bag.' And I made an ever so slight move with my left foot," Capricia said.

The 56-year old says she apologised but she couldn't help but wonder what exactly is in Her Majesty's bag?

"'We don't know what's in the bag. But we never touch the bag.'," she recalled the man saying. 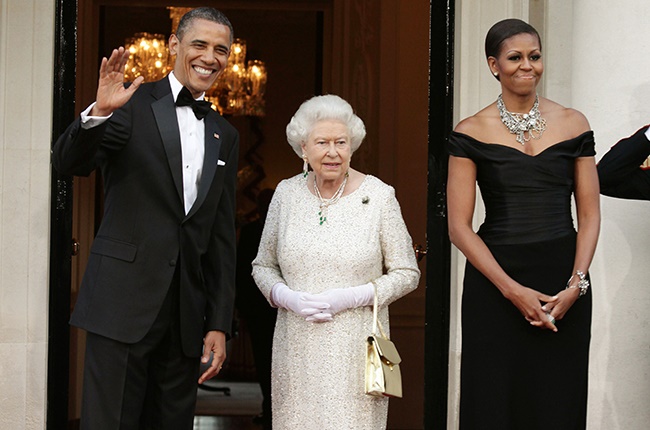 The queen meets Barack and Michelle Obama in London in 2011. Not a white handbag, but still, a bag.
Photo: Yui Mok/Getty Images

The queen doesn't go anywhere without her signature Launer handbags. You're more than likely to see a black purse break her colourful skirt suits at any given royal engagement. Rumour has it it's not so much what's in the bag – though we've heard the contents include a compact mirror and lipstick – but the purpose of slinging it on her arm.

Her Majesty's got a rather subtle skill of throwing shade, as we know, and she wouldn't dream of abruptly exiting a conversation. So she lets her royal aides do it for her.

The queen moves her bag from her one arm to the other, sometimes placing it on the table at a dinner party, according to The Telegraph, to signal she wants the engagement to end within the next five minutes. And if she places it on the floor, that pretty much means Her Majesty is bored and clearly needs rescuing from a dull, tedious conversation.

You don't want to be in the room when the handbag hits the floor. The queen meets Boris Johnson, at her home at Buckingham, with her bag on her arm.
Photo: Victoria Jones/Getty Images

We live in a world where facts and fiction get blurred
In times of uncertainty you need journalism you can trust. For only R75 per month, you have access to a world of in-depth analyses, investigative journalism, top opinions and a range of features. Journalism strengthens democracy. Invest in the future today.
Subscribe to News24
Related Links
Is Queen Elizabeth an extraterrestrial reptile? Some of the most bizarre royal conspiracy theories
PICS: Queen Elizabeth attends 'mini-Trooping' ceremony
WATCH | The queen's first Zoom!
Next on Channel24
The cash-for-honours scandal and seedy deals embroiling Prince Charles' foundation