Official financial figures published on Thursday reveal that overall costs have gone up in part because of a 10-year program to refit aging Buckingham Palace, the queen's official residence in central London.

Officials say many of the palace's heating, electrical and plumbing systems have not been updated since the 1950s and that extensive work is needed. (A view of the east wing of Buckingham Palace and the Victoria Memorial, London, circa 1960.)

Michael Stevens, who holds the title Keeper of the Privy Purse that represents his financial management role, says the refurbishment is urgently needed "to help avert the very real danger of a catastrophic building failure such as in a flood or fire."

The palace will remain open and operational during the renovation. 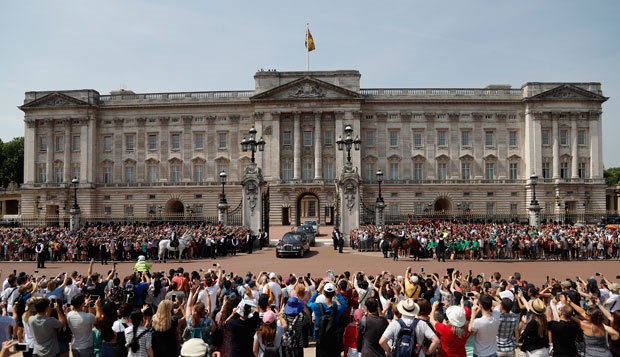 (Queen Elizabeth leaves Buckingham Palace with Prince Charles for her speech at the official State Opening of Parliament in London on 21 June 2017.)

Stevens said there are three generations of the royal family working to support the queen for the first time since the reign of Queen Victoria. Prince William and Prince Harry have taken more active roles in the last year, adding to official costs.

Taxpayer funds used to cover official duties and other costs increased from £42.8m (R77.3m) in the last financial year to £45.7m (R82.3m) for the financial year that ended on 31 March. Palace officials say the cost of payroll, travel and property maintenance all increased.

Travel costs, for example, increased from £4.5m to £4.7m. The priciest voyage was a trip by Prince Charles and his wife Camilla to India, Malaysia, Bruneil and Singapore. That totaled about £362k — in part because of the use of the Royal Air Force Voyager plane. (Prince Charles and Camilla tour the Golden Arches in the National Orchid Garden at the National Botanical Gardens on 1 November 2017 in Singapore.)

Charles, who has increasingly stepped in for his mother the queen at royal events, also made extensive use of the royal train for official travel inside Britain at a cost of roughly £20k pounds per trip.

The financial report says the 92-year-old queen carried out 154 official engagements during the financial year, including visiting victims of the extremist attack on Manchester Arena. She also carried out lighter duties, including her first ever appearance at a London Fashion Week catwalk show. Her 97-year-old husband, Prince Philip, made 57 official appearances before retiring during the summer.

The report also points out that the queen entertains 132 000 people a year at Buckingham Palace events including garden parties, investitures and receptions.