No carriage ride and no reception? Princess Beatrice’s wedding will be a not-so-royal affair Cape Town – Princess Beatrice is getting ready to say "I do".

The daughter of Prince Andrew, Duke of York, and Sarah, Duchess of York, is set to marry Mr Edoardo Mapelli Mozzi.

At the time of their engagement, no details had officially been released, but, of course, the rumour mill’s been spinning ever since the announcement was made.

So here’s everything we’ve heard so far about the upcoming nuptials of Princess Beatrice to Edoardo Mapelli Mozzi.

While many have been speculating that the 2020 nuptials will be a destination wedding, the Duchess of York confirmed to Press Association, "It can only be Britain."

While the mother of the bride didn’t give the exact location, one would think it will be at St George’s Chapel – the same place Prince Charles and Duchess Camilla, Prince Harry and Duchess Meghan and her younger sister, Princess Eugenie got married to Jack Brooksbank. But we did say the rumour mill is spinning, so we’ve also heard the wedding could take place at her parent’s home.

It’s important to note that, because Beatrice is ninth in line to the throne, she isn’t compelled to follow royal protocol – she didn’t even have to ask permission from the queen to get engaged. So although Princess Eugenie opted to have the full royal wedding affair complete with a kiss on the chapel stairs, Princess Beatrice has reportedly chosen not to.

One of Beatrice’s friends has revealed that the princess is looking to have something slightly more lowkey. She explained, "There have been three big royal weddings there [at St George’s Chapel] in the past year or so and I’m not sure that’s what Bea wants. Edo has a child, there’s the situation with his ex, and Beatrice might just feel something more lowkey might be more fitting."

With that many are saying Beatrice is considering other venues – with a marquee at her parents’ home, the Royal Lodge at Windsor, as one – and although we’re sure royal fans will get to see the couple at some point, there will reportedly be no carriage ride and no reception at Windsor Castle after either.

THE TIARA AND THE DRESS

According to HELLO!, though Princess Eugenie looked regal in the Greville Emerald Kokoshnik tiara made up of green stones and diamonds and gifted to the Queen Mother before it was passed down to Queen Elizabeth, many think Princess Beatrice may wear her mother’s diamond and platinum scroll tiara. 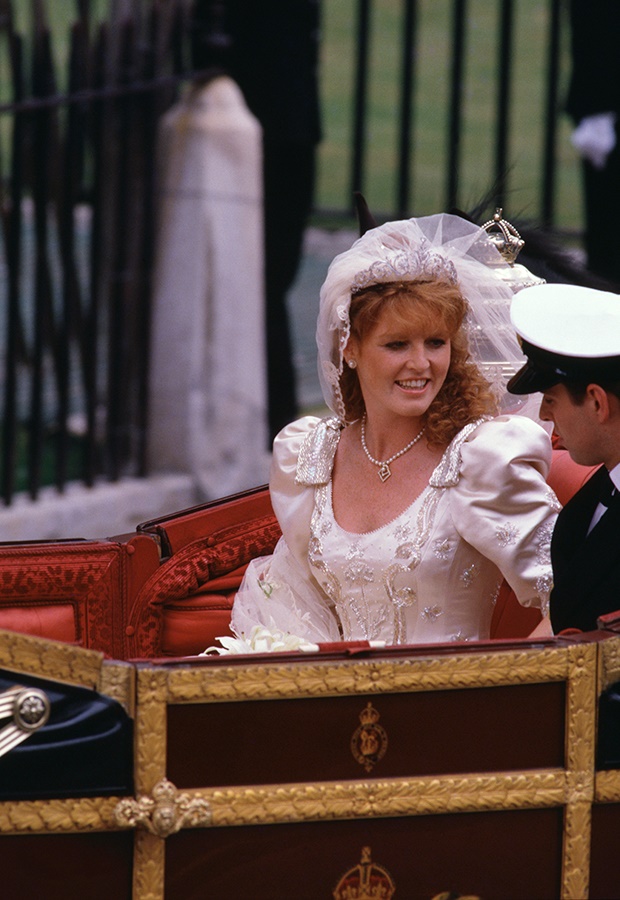 (The Duchess of York on her wedding day in 1986. Photo: Getty Images)

After her divorce from Prince Andrew, Sarah kept the 'York Tiara' gifted to her by the queen and Duke of Edinburgh, and although the Duchess of York last wore the tiara in 2001, 19 years later many are speculating it may make its long-awaited appearance in 2020.

As for her wedding dress, Harper’s BAZAAR reports that should it be at St George’s Chapel, Her Royal Highness will have to follow a particular royal protocol and dress the part with the dress having to be white, sleeved – not too riqué. But then again, Bea isn’t afraid to take risks with her fashion choices, wearing colourful, printed pieces with statement accessories before – and she’s certainly got a list of designers she often steps out in.

MSGM, Alberta Ferretti, Self-Portrait, Valentino, Mary Katrantzou and Roksanda are just a few of the big names Beatrice could choose to design the perfect dress.

Of course, the entire royal family will probably be invited to the wedding (fingers crossed Archie gets the honour of ring bearer), but so too will a long list of celebrity guests if any of the other royal weddings are anything to go by.

Robbie Williams and his wife, Ayda Field, Ellie Goulding, Karlie Kloss and Misha Nonoo – who is also close friends with Duchess Meghan and Prince Harry, are all very close to the royal. POPSUGAR reports Robbie Williams even refers to the princess as “sis”, while Ellie, Karlie and Misha all vacayed with Bea in Jordan last year, reports Town & Country.