Catherine, Duchess of Cambridge in the Royal Box on Centre court during the Men's Finals Day of the Wimbledon Tennis Championships.

Seated in the royal box alongside Wimbledon chairman, Philip Brook and his wife, they watched what soon became the longest singles match in history.

According to Sport24, Novak Djokovic won his 16th Grand Slam title defeating Roger Federer after 4 hours and 57 minutes. After 4 sets, and in a final set tiebreak, Djokovic triumphed.

Kate, along with the Duke of Kent, president of the All-England Club – the organisation that runs the championships – presented the trophies.

What an incredible, breathtaking Wimbledon final ?? @djokernole and @rogerfederer! Congratulations Novak on your fifth #Wimbledon title! The Duke of Kent, President of The All England Lawn Tennis Club, and The Duchess of Cambridge, Patron of The All England Lawn Tennis Club presented this year’s @Wimbledon Gentlemen’s Singles Final trophies ?? following the match. Ahead of the final, The Duke and Duchess of Cambridge thanked the ballboys, ballgirls, staff and referees for their tireless work in making this year’s tournament a huge success. ??Wimbledon/PA

The Kensington Palace Instagram account shared images of the Duchess of Cambridge congratulating Djokovic, captioning the images, “What an incredible, breathtaking Wimbledon final.”

While Kate was all smiles throughout, a few candid shots revealed just how incredible and breathtaking the match really was.

SEE PHOTOS OF KATE AT THE FINAL BELOW: 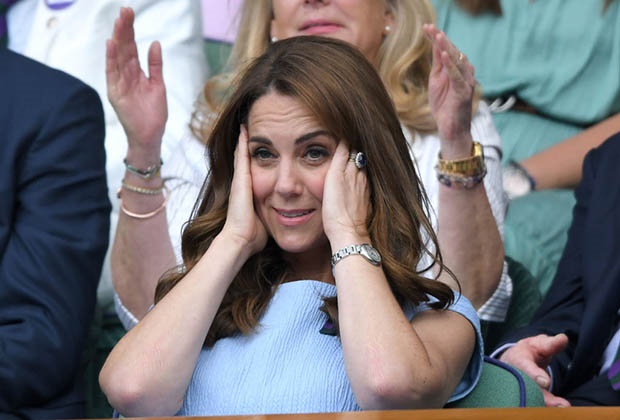 We live in a world where facts and fiction get blurred
In times of uncertainty you need journalism you can trust. For only R75 per month, you have access to a world of in-depth analyses, investigative journalism, top opinions and a range of features. Journalism strengthens democracy. Invest in the future today.
Subscribe to News24
Related Links
PICS: From Archie to Prince George - The royal kids have a ball at polo match
Prince George got a tennis lesson from his favourite player Roger Federer
PICS: Duchess Kate is all smiles on court 14 at Wimbledon
Next on Channel24
Princess Charlene hopes to leave South Africa by the 'end of October' she says