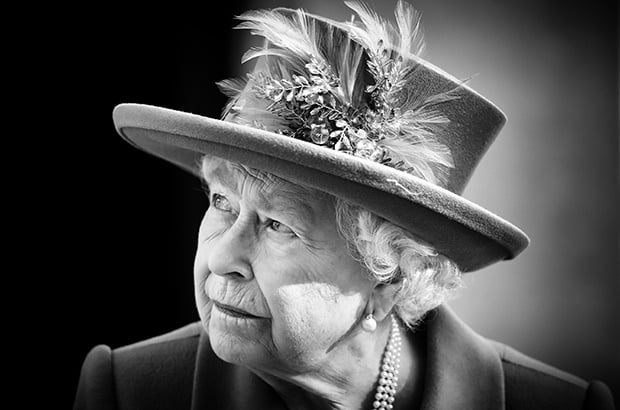 On Sunday evening Queen Elizabeth addressed the nation in a televised broadcast amid the coronavirus crisis.

Buckingham Palace released a statement before the broadcast aired saying it was a "deeply personal" speech for the queen, reports ITV News, and considering she's only made an address four times before, we can understand why.

Her final words – "we will meet again" – seems to be an ode to the wartime anthem We'll Meet Again by Forces' Sweetheart Dame Vera Lynn, highlighting just how trying a time this is – and how significant the queen making a speech must be.

Below we look at four other occasions the queen has spoken publicly, beginning with her very first speech during World War II in 1940 – and then her first as queen in 1991.

In 1991 the queen made an address during the Gulf War.

"As a nation, we are rightly proud of our armed forces," she said. "That pride has been fully justified by their conduct in the Gulf war so far. As they, with our allies, face a fresh and yet sterner challenge, I hope that we can unite, and pray that their success will be as swift as it is certain and that it may be achieved with as small a cost in human life and suffering as possible. Then may the true reward of their courage be granted: a just and lasting peace."

In her address on Sunday, the queen also highlighted a speech she'd made with Princess Margaret in 1940 during World War II.

Then too families were forced apart – so the queen, who was Princess Elizabeth at the time, made her first-ever speech to the children of the Commonwealth.

"And when peace comes, remember it will be for us, the children of today, to make the world of tomorrow a better and happier place," she said in the radio broadcast. (10 October 1940: Princesses Elizabeth and Princess Margaret making a broadcast to the children of the Empire during World War II. Photo: Getty images.)

In 1997 Queen Elizabeth made her second address, and again, during a rather sad and difficult time.

Prince William and Prince Harry said goodbye to their mother, and the people lost their princess, on 31 August 1997.

One documentary detailing it all was fittingly titled, Diana: The Day the World Cried.

Queen Elizabeth addressed the nation and said in her broadcast, "Since last Sunday's dreadful news we have seen, throughout Britain and around the world, an overwhelming expression of sadness at Diana's death.

"We have all been trying in our different ways to cope. It is not easy to express a sense of loss, since the initial shock is often succeeded by a mixture of other feelings: disbelief, incomprehension, anger — and concern for those who remain. We have all felt those emotions in these last few days. So what I say to you now, as your Queen and as a grandmother, I say from my heart.

"First, I want to pay tribute to Diana myself. She was an exceptional and gifted human being. In good times and bad, she never lost her capacity to smile and laugh, nor to inspire others with her warmth and kindness. I admired and respected her — for her energy and commitment to others, and especially for her devotion to her two boys."

An estimated 60 million flowers were laid outside Kensington Palace in the weeks following Dianna's death. 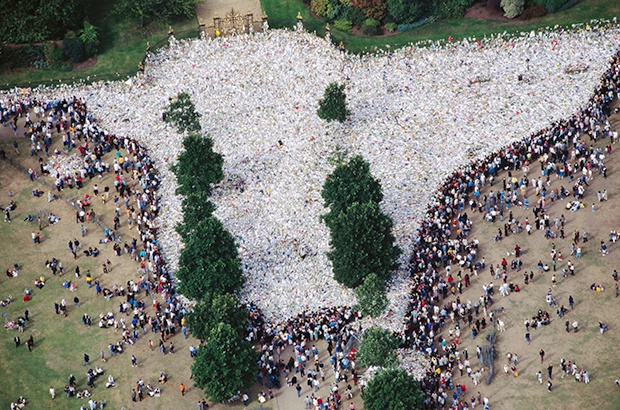 (FLOWERS FOR DIANA: In an overwhelming outpouring of grief and sympathy, bouquets of flowers were left at Kensington Palace for Diana. Photo: Getty Images.)

When Queen Elizabeth's mother, the Queen Mother, died at 101 years old in 2002, she spoke of her "infectious zest for living" one day before her funeral.

"I count myself fortunate that my mother was blessed with a long and happy life," she recalled. "She had an infectious zest for living, and this remained with her until the very end."

On a happier note, the queen last made a televised address upon reaching her Diamond Jubilee in 2012.

The queen said, "It has touched me deeply to see so many thousands of families, neighbours and friends celebrating together in such a happy atmosphere.

"I hope that memories of all this year's happy events will brighten our lives for many years to come. I will continue to draw inspiration from the countless kindnesses shown to be in this country and throughout the Commonwealth."

We live in a world where facts and fiction get blurred
In times of uncertainty you need journalism you can trust. For 14 free days, you can have access to a world of in-depth analyses, investigative journalism, top opinions and a range of features. Journalism strengthens democracy. Invest in the future today. Thereafter you will be billed R75 per month. You can cancel anytime and if you cancel within 14 days you won't be billed.
Subscribe to News24
Related Links
Queen Elizabeth in rare speech amid Covid-19 crisis: 'Better days will return'
Windsor Castle lights up in blue in honour of front-line workers amid coronavirus pandemic
Queen Elizabeth's annual birthday parade will not go ahead as planned
Next on Channel24
Buckingham Palace says 'lessons have been learned' after royal review of Meghan Markle bullying claims