Cape Town – Remember when Queen Elizabeth invited Meghan, and only Meghan, aboard the royal train? Her Royal Highness and The Duchess of Sussex embarked on a royal tour without Prince Harry – turns out Kate Middleton wasn’t even afforded the opportunity to choo-choo into the sunset with the queen.

Duncan Larcombe says Queen Elizabeth has made an "unusual effort" to get close to Meghan Markle. The royal commentator explained inviting Meghan to more events was a way for the queen to "signal the fact that she was welcoming her into the royal family", reports Vanity Fair, since Meghan didn’t have the same gradual, royal introduction that Kate might have.

"Possibly because Meghan very much burst onto the scene in a way Kate obviously didn’t. Everyone got to know Kate and the family long before they [Prince William and Kate Middleton] got engaged."

Queen Elizabeth undoubtedly has a special bond with Meghan – The Duchess of Sussex even shares a birthday with Queen Elizabeth’s late mom, The Queen Mother – but it also traces back to her relationship with Princess Diana. Duncan told The Sun Queen Elizabeth "made a particular and slightly unusual effort" with Meghan "because of the lessons of the past where Princess Diana pretty much felt like an outsider in the royal family" – a fact known to almost everyone who follows the royals.

Princess Diana’s private secretary, Patrick Jephson revealed to TIME that the Princess of Wales often felt alienated while Diana, herself explained in her 1995 interview with Martin Bashir that she didn’t feel as though she always had the royal family’s support, that only got worse after her separation from Prince Charles.

It’s also no secret that Queen Elizabeth and Princess Diana didn’t always get along very well, with the "people’s princess" challenging the monarchy and breaking royal protocol.

Meghan Markle, much like Diana, has broken royal protocol her fair share of times too, but it looks like the queen is taking a different, albeit 'unusual' approach, this time around. 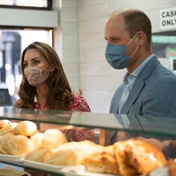