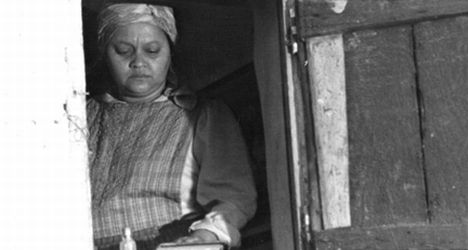 Based on Daleen Mathee's touching novel, this tale centres on Fiela Komoetie, a rural coloured woman who finds a young abandoned white boy on her stoep and takes him in.  Fiela names him Benjamin (pronounced Ben-ya-min) and 'adopts' him as one of her many children. Several years later, the government removes him from her care and returns him to his supposed biological parents, Elias and Bartha van Rooyen. They are white woodcutters living in the forest who claim that this is their lost son, Lukas.

From the beginning it's evident that this relocation is bogus and is simply racially motivated. One of the most moving scenes is when Fiela risks imprisonment when she goes to see the Landdros (magistrate) and emphatically pleads with him to reconsider Benjamin's fate. She explains that it's virtually impossible that a young Lukas could have walked all the way from the Knysna forest to her home across the Outeniqua Mountains. But logic and reason are second to what's 'right'. White kids belong with white families.

Shaleen Surtie-Richards is outstanding as Fiela, a stern, but fiercely protective woman. Richards still considers this to be one of her best roles to date. I love how nothing in this film seems acted. It almost feels like a documentary introducing you to the day-to-day life of the Komoetie family.

The anguish escalates as Benjamin struggles to adapt to his new life as Lukas. He and his new sister Nina are abused and basically used as labourers. There’s no bond between Lukas and his new mother. Bartha is wracked by guilt but too afraid of her violent husband to do what she knows is the right thing. When Elias cuts Nina's hair with a dagger in a fit of rage, it's evident that he rules his household with an easy-swinging iron fist.

While it's torturous to witness all this heartache, Fiela Se Kind is not a sob story. Benjamin's strength of conviction and belief throughout the terrible years with the Van Rooyens is inspirational. He's such a good son, that he never abandons either family.

Dawid Minnaar (you may know him as Dr Franz Basson from Binnelanders) plays an adult Benjamin who begins a desperate search for his true identity, which is fuelled more by his developing feelings for his 'sister' Nina than anything else.

As much as Benjamin's true identity didn't affect how he felt about his Komoetie family, it was vitally important to his relationship with Nina. The wonder of this story lies in its encompassing attitude. Each character suffered massive injustices. Some retaliated, others ran away. But Benjamin let none of it deter him from seeking happiness.

Fiela se Kind may be an indigenous story, but the message is global: Belonging and identity have very little to do with your genes.

We live in a world where facts and fiction get blurred
In times of uncertainty you need journalism you can trust. For only R75 per month, you have access to a world of in-depth analyses, investigative journalism, top opinions and a range of features. Journalism strengthens democracy. Invest in the future today.
Subscribe to News24
Next on Channel24
Venus in Fur trailer