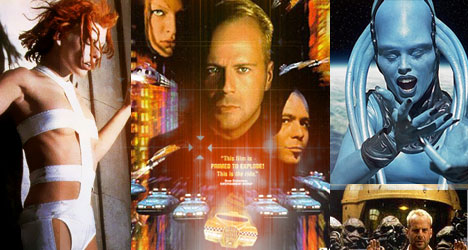 Maybe Luc Besson had the same concerns when he wrote and directed The Fifth Element, possibly the most stylish sci-fi caper ever made. With incredible attention to visual detail and a stellar crew of stylists, stuntmen and CGI technicians, Besson crafted something exciting and bold enough to excite Hollywood, that somehow still seems quintessentially French.

The story is standard space adventure fare: the world is about to end, thanks to a sentient, evil comet hurtling towards the Earth. A forgotten ally of the human race sends an ultimate weapon, the comely Leeloo (Milla Jovovich) to prevent the disaster, but flamboyant Mr Zorg and his goons are determined to stop her. It is up to Korben Dallas, a former soldier who is unwillingly tasked with protecting Leeloo, to ensure that the world as we know it does not end... you get the picture.

The Fifth Element features the talented grimace of Bruce Willis, all-American hero of the Die Hard movies, as Korben Dallas and casts versatile Brit Gary Oldman as the temperamental (and fabulous) Dr Zorg. So far, so Anglo-centric. But behind the cameras, fashion wunderkind John Paul Gaultier ran the wardrobe and an army of Parisian hairdressers and set designers pitched in to make the entire movie, the entire world of The Fifth Element, look as amazing as it does self-obsessed.

At this point, you’d be forgiven for thinking the movie is some kind of soap opera set in 3000 AD. It isn’t. The Fifth Element is an all-out action movie, but like the best Asian martial arts epics (ie Crouching Tiger, Hidden Dragon) it emphasises style over substance. What’s the point of saving the world if you can’t look good doing it, right? Which brings us to Milla Jovovich.

You might say that casting the model-turned-actress as a waifish beauty that speaks bad English (Leeloo, saviour of the world) wasn’t much of a stretch for Jovovich, but truth be told, there are few models-turned-actresses that could have pulled it off. The geek darling Leeloo is still one of the hottest characters in the sci-fi canon and makes a better case for fiery orange hair dye than any Revlon commercial ever could.

Hair dye, fashion, Bruce Willis. Granted, The Fifth Element is hardly God’s gift to storyline or critical thought or even futurology, but when you get to bask in the fantastic heat of so much cinematic flair and panache and je ne se qua as this space yarn offers… that’s hardly a bother, is it?

A bit of trivia (from IMDB.com):

- The language spoken by Leeloo was invented by director Luc Besson and further refined by Milla Jovovich. By the end of filming they were able to have full conversations in this language.

- When Korben Dallas wakes up in the movie, the date can just be seen on his bedroom wall: March 18th, 2263. 18 March is director Luc Besson's birthday (a day before Bruce Willis').

- At the time, it was the most expensive film ever produced outside of Hollywood.

- The explosion in the Fhloston main hall was the largest indoor explosion ever filmed up to that time. The resulting fire almost got out of control.

Check in Attendant: Mr. Rhod, you are going to have to assume your individual position.
DJ Ruby Rhod: I don't want one position, I want all positions!

Leeloo: Everything you create, you use to destroy.
Korben Dallas: Yeah, we call it human nature.

Police: Are you classified as human?
Korben Dallas: Negative, I am a meat popsicle.

DJ Ruby Rhod: We'll find out everything there is to know about the D man: his dreams, his desires, his most intimates of intimates, and from what I'm looking at, "intimate" is the stud muffin's middle name. So tell me my man, are you nervous in the service?
Korben Dallas: Mmm... not really.

We live in a world where facts and fiction get blurred
In times of uncertainty you need journalism you can trust. For only R75 per month, you have access to a world of in-depth analyses, investigative journalism, top opinions and a range of features. Journalism strengthens democracy. Invest in the future today.
Subscribe to News24
Next on Channel24
Venus in Fur trailer