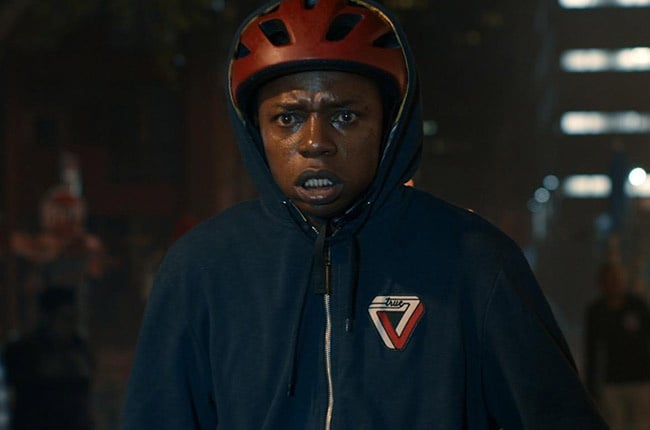 In a year that hasn't been good for cinemas, Netflix has become a light in the tunnel for South African productions.

From the horror film 8 to the romantic comedy Seriously Single to the action thriller Santana, the streaming service has given local films the platform to reach a wider audience, the global stage.

Its newest local release is Riding with Sugar directed by Cannes Lion Gold winner Sunu Gonera and starring Hakeem Kae-Kazim and Charles Mnene. It is a uniquely African coming-of-age story about a young refugee who wants to win a bicycle championship to improve his life. A scene in Riding with Sugar.
Photo: Netflix

Charles plays Joshua, a refugee from Zimbabwe who finds asylum in Cape Town, and Hakeem plays Mambo, a seeming do-gooder who offers shelter for teenage refugees from Africa. When Joshua meets Olivia (Simona Brown), a dancer from a well-off family, it takes him into another world, but her insights also cast a shadow over Mambo's real agenda.

For Charles, the character Joshua offered a challenge which he wanted to see if he could embrace and learn from, he tells me during our interview.

"He's a migrant refugee. He has an accent. He goes from one habitat to another, one country to another, looking for a better life through his BMX talents.

"I had to learn BMXing, not to ride a BMX bike, but to do stunts on a BMX bike. There was also physical demands within the role. There was so much emotion in the whole piece. You know, the journey in itself is a very hopeful message in Riding with Sugar."

"It took me about two months to train on the BMX. I was still not good enough because we had a stunt man from South Africa. Nathi Steeze, he's a BMXer, an amazing BMXer as well. And so, you know, he was able to show me a lot and do a lot as well. I just followed his lead. And I stuck to the acting."

In a similar vein, what attracted Hakeem to the role was the many layers of Mambo.

"The complexity of the man having been through what he'd been through, having wanted to see life go in one direction and possibly being sort of changed to a new life in a different way.

"Having to be a father figure to these young people and wanting to do the best by them, with his methods and in his own way, feeling that they're justified. Just the complexity of the man is very deep and very complex, which I think is like a lot of African men of the same generation that went through the post-colonial process and wanting the best for their kids and against everything," says the 58-year-old.

I ask Hakeem about playing roles that are often seen as villainous to which he responds: "It's interesting because I don't believe any of them are villainous.

"I don't believe that people are evil by nature. People just see the world in a particular way and want to achieve what they feel is justified and God-given to them." The heart of the story is the mentorship between Joshua and Mambo. Charles says it was an honour working with Hakeem who is so welcoming and open to him trying new things.

"I know actors say this a lot. When I was working with him, I would just look at him instead of working. He was always giving, and he was always letting me experiment. I would miss him when he wasn't on set. I looked forward to doing scenes with him."

In turn, Hakeem says Charles is a wonderful young man, and that they clicked right away.

"When you are on the same page the chemistry comes easy. Where you come from, because you've discussed where you're going with each other, because you understand each other, not only as human beings but as these characters that you've developed. So, it was just great, great to work with somebody like that."

One of the main themes in the film is the refugee experience of Africans in South Africa. There is a touching scene where the boys who live with Mambo proclaim their identity and that they belong too.

Hakeem asserts that what Mambo tries to let the kids say in that scene is "that we belong".

"We belong in the continent, so we are home. That, to me, is what Mambo tries to teach these kids. That, to me, is what these kids take away. That is what I want young people to take away from the film; for young South Africans to understand the bigger picture of embracing Africa as a continent on the whole and embracing brothers and sisters and moving forward so that we as a continent can be empowered as young people."

"I hope that the young people take away from this movie, that aspirational afro-futuristic we can achieve, and we can create a better tomorrow for not only us, but for our children and our children's children."

A standout quote from the movie for Charles is: "Everyone has a story to tell."

He hopes that audiences will be entertained, amazed and connect emotionally with the film.

"I just want everyone to watch the film and get the same feeling I had, and I hope they do get that feeling, it's not promised. When I watched that film, I felt good about myself. It motivated me, it didn't leave me in a downbeat, but upbeat. I hope everybody gets that feeling and enjoys it."

We live in a world where facts and fiction get blurred
In times of uncertainty you need journalism you can trust. For only R75 per month, you have access to a world of in-depth analyses, investigative journalism, top opinions and a range of features. Journalism strengthens democracy. Invest in the future today.
Subscribe to News24
Related Links
Inspirational South African film Riding With Sugar to premiere on Netflix
Local film gets R2.5m grant from lottery fund
Next on Channel24
Top 10 worst movies of 2021