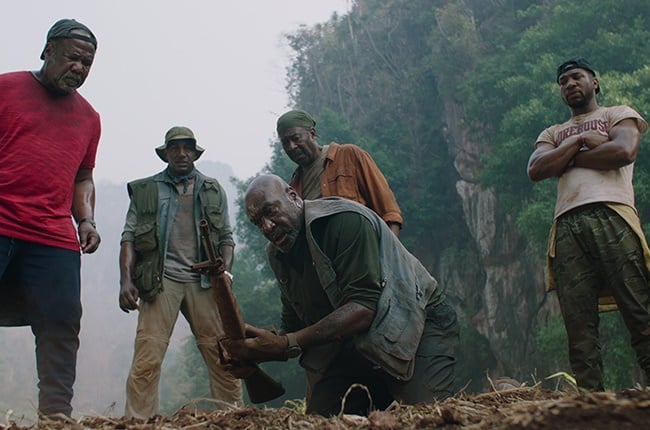 Four African American veterans return to Vietnam decades after the war to find their squad leader's remains - and a stash of buried gold.

Spike Lee's new joint Da 5 Bloods comes at a timely moment in American and world history. Across the world, people have taken to the streets in solidarity of the Black Lives Matter movement to protest police brutality and racism.

The film opens with Muhammed Ali's famous speech in which he refused to serve in the Vietnam War, what follows is a history lesson, a montage of the Vietnam War and the Civil Rights movement in the US.

"Here we go with the damn Vietnam war, and we still ain't got nothing but racist police brutality etc.," says Bobby Seale's in his 1968 speech. It's a grim reality that for Black people in America not much has changed since then.

In the world of the film, we are in modern-day Vietnam where we meet our four veterans; Paul (Delroy Lindo), Otis (Clarke Peters), Eddie (Norm Lewis) and Melvin (Isiah Whitlock, Jr.) who are back in the country for one last mission to find the remains of their squad leader Norman (Chadwick Boseman) and retrieve a chest of gold they found.

Beneath the bond that they share, each one is dealing with trauma from a war that might have ended decades ago but has had long-lasting effects on their lives.

The first half of the movie sees the Bloods plan their mission. We also get flashbacks from their time in Nam, a combat scene, and we get to meet Norm, who they called their Martin and Malcolm.

The storytelling techniques used in the flashback scenes is a novel approach as the actors are not seen as their younger selves and the aspect ratio of the shot changes. In interviews Spike said that he did not want to spend money in de-ageing the actors, this method also serves the theme that although now in their 60s they are still carrying the scars of war.

The second half of the film turns into an action thriller. As they move through the jungle they are confronted by memories, tension, real-life dangers, a double-cross and the eventual shoot out to protect their loot.

It's also here where the acting is turned up a notch. It might be too early to say, but Delroy Lindo gives one of the best performances of the year. A three-minute soliloquy as he looks straight into the camera while he hikes the jungle alone. It's raw and palpable, and it will leave you speechless.

Da 5 Bloods is a war film we seldom see as it is told solely from the perspective of black soldiers. In an interview with Channel24, Lindo said it is a historical corrective; "from my point of view, this adds to the genre that there were black men there."

Like every other Spike Lee film, Da 5 Bloods is required viewing; it's a powerful film that examines both the past and present and, in some sense, serves as a warning for the future. Change needs to come, if not now, when?

We live in a world where facts and fiction get blurred
In times of uncertainty you need journalism you can trust. For 14 free days, you can have access to a world of in-depth analyses, investigative journalism, top opinions and a range of features. Journalism strengthens democracy. Invest in the future today. Thereafter you will be billed R75 per month. You can cancel anytime and if you cancel within 14 days you won't be billed.
Subscribe to News24
Next on Life
REVIEW | Santa in murder mode? Violent Night is perfect for a Christmas hater's December movie list