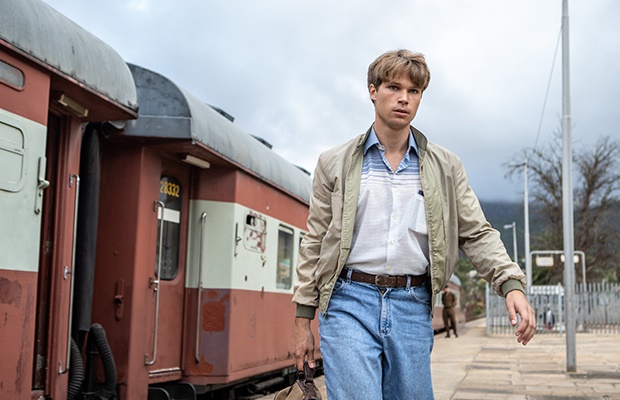 The year is 1981 and South Africa’s white minority government is embroiled in a conflict on the southern Angolan border. Like all white boys over the age of 16, Nicholas Van der Swart must complete two years of compulsory military service to defend the apartheid regime. The threat of communism and the "Swart Gevaar" ("black danger") is at an all-time high. But, that’s not the only danger Nicholas faces. He must survive the brutishness of the army—something that becomes even more difficult when a connection is sparked between him and a fellow recruit.

My parents were stationed in the small town of Opuwo (also known as Otjihinamaparero) in north-western Namibia close to the Angolan border. This is where I grew up until I was nearly four years old.

I know very little about the war other than anecdotal stories of my mother sheltering me in an empty bathtub under a mattress while our house was under fire, or the fact that I had driven in a Casspir mine-resistant vehicle and had flown in a Flossie aircraft before I had ever had a ride in a regular car.

My parents had not only sheltered me physically but also emotionally from a war that's aftereffects are still rippling through its victims and victors even generations later.

My father, to this day, never speaks of the war and has never received any professional support for his post-traumatic stress disorder (PTSD). This inadvertently impacted our relationship, and at age 35, I've still not had the guts to utter the words "I am gay" to my own father.

It's during the very final scene of Oliver Hermanus' cinematic masterpiece Moffie that the true magnitude of what I had just watched came crashing down on me.

My two worlds had met in a thunderous clap on the big screen in front of me. My story of origin and my struggle with self-acceptance were in a dogfight before my own eyes.

Moffie, a derogatory term used to describe a man regarded as effeminate, is a burly battle cry that fiercely slams its fists into the ground to upend the toxicity that masculinity is rooted in. It's dreamy cinematography, and elegant imagery lures the viewer into a false serenity before violently spitting them back out in shock and horror. When you're at your most comfortable in this masterstroke of cinema, it prays on your vulnerability and kicks you in the face before blowing your guts out.

A word once used as a weapon by the enemy is turned into a sharp blade that slashes back quicker and deadlier than it could leave the mouth of a hater. A word that is meant to make us feel powerless, shameful, and unwelcome in the fraternity of manhood becomes a symbol of our quiet resilience. A word meant to shun us from our virility becomes a metaphor for the war we fight within.

Both dialogue and physical intimacy are scarcely placed throughout the film but somehow omnipresent. Our protagonist Nicholas Van der Swart (Kai Luke Brummer) speaks more with his eyes than ever with his lips. For those that know, it's a spine-chilling reminder of the survival mechanism used to escape the wrath of a bully.

When dialogue is used it's often peppered with profanity that's meant to make you squeal uncomfortably. It's but a speck of dust compared to the hateful words used as ammunition against those that have been branded a target.

The film only ever shows a single kiss, yet it's pulsating with sexual energy from start to finish. A single glance, an almost touch, sun-kissed shoulders and muscled physiques are forbidden fruit ripe for the picking but can never be pluck.

Moffie is a war within a war, and war is never beautiful. It's a brave battle of self-acceptance without the jubilation of victory. Because there never truly is a winner in war.