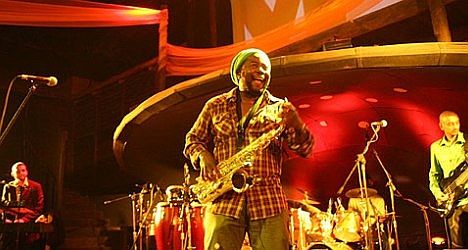 You'd be wrong. Citizen of the World may be smooth, but it isn't smooth jazz wallpaper. The aforementioned "Boarding Time" (featuring fellow expat Mozambican rapper Simba) is a jazzy-rapped invitation to join the 30-something ethnomusicologist on a globetrotting tour through many of his musical beat routes. "Umjita" is a percolating extrapolation of the spaces where Cape jazz and Afro-American bebop traditions meet and greet. "West Side South Side" is an impeccably hip conversation in groove-laced, Afro-quelque (translated: 'Afro-something') funk with legendary Cameroonian saxophonist Manu 'the Lion of Africa' Dibango.

Moreira knows how to soundtrack those introspective, 'after hours' moments too. Strings-and-piano ballad breeze "The Art of Love" errs comfortably on the cool - rather than smooth - side of the chamber jazz spectrum. While the sub-Saharan scatter "Synergy" (yes, it's an apt title) is effortlessly funkier than most 'world music' fusions you'll hear on high radio rotation this year.

So yes, Moreira's an intuitive reedsman who knows exactly what to do with his love of a melodic soprano solo. Keep it spiritually funky; which he does on the bracingly smooth "Beautiful Minds", the playful polyrhythmic dance pulse of "Otupam" (featuring flautist Najee), the hip-shaking Afro-Latin fiesta of "Relaxante", and the bewitchingly fiery global brew of "Ashanti".

No surprises then that Citizen of the World has been nominated for three 2009 SA Music Awards including "Best Contemporary Jazz Album", "Best Producer" and "Best Album Design".
Share
Next on Channel24
REVIEW: Fiona Apple made an album brilliant enough to break through our despair