New York — Ariana Grande will be among the performers who will pay tribute to Aretha Franklin at her funeral on Friday.

Franklin's rep, Gwendolyn Quinn, says Franklin met Grande when the two performed at the White House in 2014 for then President Barack Obama and first lady Michelle Obama as part of the "Women of Soul" concert.

Franklin's family was moved by Grande's performance of (You Make Me Feel Like) A Natural Woman after Franklin's 16 August death.

Grande performed the song with The Roots on The Tonight Show Starring Jimmy Fallon.

We live in a world where facts and fiction get blurred
In times of uncertainty you need journalism you can trust. For only R75 per month, you have access to a world of in-depth analyses, investigative journalism, top opinions and a range of features. Journalism strengthens democracy. Invest in the future today.
Subscribe to News24
Next on Channel24
Two guitars owned by rock legend Eddie Van Halen going up for auction 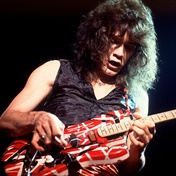