Ariana Grande just released the single and music video for her first solo track of the year.

The singer, who promised her new album would be out sometime in October, shared the video for Positions on Friday after teasing fans with a snippet of the track just hours before.

The release had Ari trending on Twitter, with many commenting on the video which depicts the singer as the president of the United States.

In the music video, Ariana runs the White House with a diverse team full of women.

We also have to talk about the star's outfits. The singer looks like a dream in 60s inspired looks.

We live in a world where facts and fiction get blurred
In times of uncertainty you need journalism you can trust. For only R75 per month, you have access to a world of in-depth analyses, investigative journalism, top opinions and a range of features. Journalism strengthens democracy. Invest in the future today.
Subscribe to News24
Related Links
WATCH | The trailer for Shawn Mendes' documentary is here
WATCH | Elton John joins Teyana Taylor for striking new music video
WATCH | The SA film and TV industry came together to create the most epic Jerusalema dance challenge
Next on Channel24
2020 BET Soul Train Awards - See all the winners here 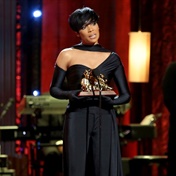