WATCH: DJ Cuppy's colourful Jollof on the Jet music video will have you hooked from start to finish 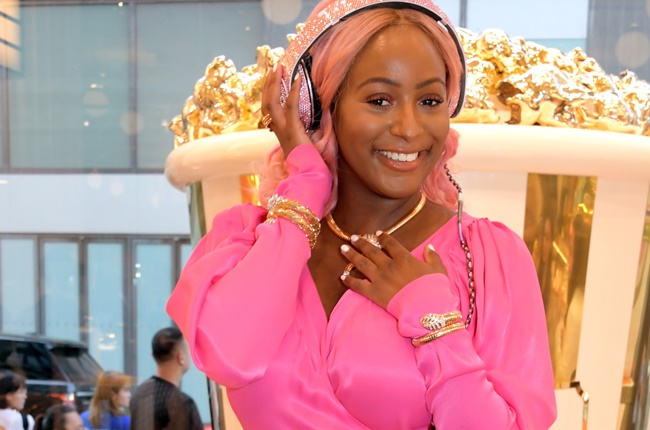 The music video for DJ Cuppy's Jollof on the Jet is here!

The muso, who hosts Africa Radio Now on Apple Music, was excited when she released the track in July, asking fans to support her by listening to it.

Cuppy also encouraged everyone to take part in the #JollofOnTheJet challenge, posting a video of herself seductively eating Jollof rice, a popular West African dish, from a pot.

Jollof on the Jet is the first single of the star's upcoming album, Original Copy. The track features Nigerian singer, Rema, and Tanzanian musician, Rayvanny.

The colourful music video, directed by Jimmy Turrel, will make you yearn for summer. As the lyrics jump around the screen, they're accompanied by bright visuals that grip your attention from start to finish. Seeing Cuppy enjoy herself on screen will also make you want to get up and start dancing.

"For the Jollof on the Jet video, my label Platoon loved the song and were adamant on creating a visual that stimulated and inspired people to get in this world and have an imaginative experience. Jollof on the Jet is a song that is a breath of fresh air and also picks on, you know, the pride of Africa through our food and through our music and I couldn't be more proud of this video." Cuppy said in a statement.

Watch the official video for Jollof on the Jet here:

We live in a world where facts and fiction get blurred
In times of uncertainty you need journalism you can trust. For only R75 per month, you have access to a world of in-depth analyses, investigative journalism, top opinions and a range of features. Journalism strengthens democracy. Invest in the future today.
Subscribe to News24
Related Links
Phil Collins' In The Air Tonight got a boost in sales because of this viral video
Tiger King's Carole Baskin calls out Cardi B for using big cats in new music video
Meet Japan's beatboxing monk
Next on Channel24
Drake reveals (more or less) when fans should expect his new album