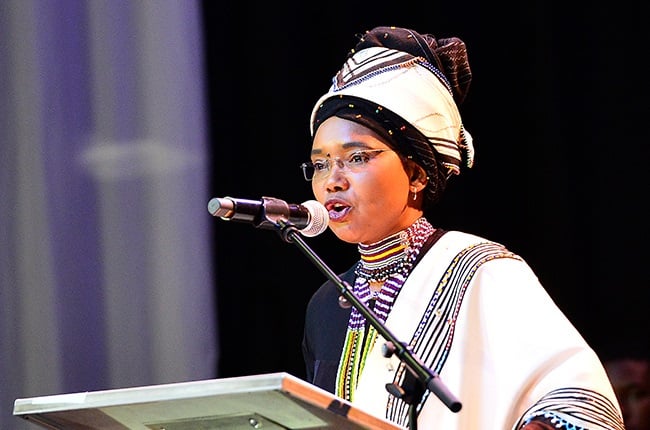 The end of an era takes place this evening when the veteran SABC News anchor Noxolo Grootboom (60) will read her last TV news bulletin on SABC1 at 19:00 in isiXhosa on SABC Iindaba after bowing out after 37 years in the industry.

The beloved SABC News newsreader who also worked as a SABC News editor rose to fame with her SABC TV news isiXhosa bulletin sign-off closer, "Ndinithanda nonke emakhaya," that can loosely be translated as, "I love you all at home."

In an on-air message that the SABC rarely, if ever before, do to salute departing SABC News TV anchors, SABC1 says: "Catch her final news bulletin Tuesday at 19:00 on SABC1."

Veteran #SABCNews Journalist #NoxoloGrootboom retires. She will be reading her last bulletin in isiXhosa tonight at 19:00 on @Official_SABC1. pic.twitter.com/cwjFXTQ1jp

Noxolo, who grew up in Fort Beaufort in the rural Eastern Cape and got her name (mother of peace) from her grandparents, started her career at the SABC as a typist.

She climbed the career ladder inside the SABC's Auckland Park headquarters, where she eventually made her way on-air as the widely-respected and beloved isiXhosa TV news anchor for over two decades.

In 2013 she anchored the funeral broadcast of South Africa's late president Nelson Mandela. She returned in 2018 after she was asked to anchor the SABC's funeral proceedings for former first lady Winnie Madikizela-Mandela.

"When I disappeared from the screens, many people thought that I had left the SABC when they didn't see me, but I was still within the SABC News department as an editor in the output section," Noxolo Grootboom told the SABC's Radio 2000 in an interview on Monday.

Noxolo, who became one of the iconic South African TV news faces, skillfully used metaphors in her news reading and commentary to convey information to viewers and got kudos for proudly wearing traditional Xhosa and other African attire.

"When I made my move to Johannesburg, it wasn't to pursue any career in media," she said.

Noxolo was forced to move to Johannesburg just after she finished matric and stayed with her mom and her two brothers in Dube, Soweto.

"Coming from home with my own bedroom to stay in a room much smaller than my own bedroom, I made up my mind that I would look for a job to make sure that I take my family out of that misery.

"I wasn't eyeing any particular job at that moment. I just told myself that anything that I find I will do. I even said to my mom that even if I get a job as a street sweeper in Johannesburg, I will sweep those streets until I become chief street sweeper or maybe a manager of street sweepers.

"In 1983, I got this job at the SABC as a typist, and that's when all things started to happen," Noxolo said.

One day during lunchtime, she bumped into a colleague working at a current affairs show who told her they're in desperate need of a secretary, and that is how she switched to SABC News' current affairs division.

"My days of TV news didn't start, which is what many people know me. It started when I was that secretary at current affairs. We had only one presenter for our isiXhosa programme, and for some reason, he did not show up.

"He was not feeling well, and they realised that the programme has to go on-air and they don't have a presenter. And the manager said: 'Why the stress? I have a Xhosa in my office.' And there goes Noxolo – not even formally trained, with a doek. I went in and presented that programme.

"Moving forward, one of the main isiXhosa news anchors then was not well, and they needed someone to hold the fort in her absence, and so I was asked to hold the fort, and I did that."

From there, the rest was history when Noxolo Grootboom became the face of the isiXhosa TV news.

About her signature sign-off, she says: "One day I was writing my close in the office for the news bulletin, and I thought to myself, 'What is it that I can say to show how much I appreciate the way they have welcomed me in their homes?' And I just thought that I will say, 'Dinithanda nonke emakhaya.'"

She said that what she will miss most will be "my children in the office – not just on the Xhosa desk". "I'm such a rich person because I'm retiring with an army of children from the newsroom. I'm going to miss them dearly.

"And I'm going to miss doing what I love doing most."

We live in a world where facts and fiction get blurred
In times of uncertainty you need journalism you can trust. For only R75 per month, you have access to a world of in-depth analyses, investigative journalism, top opinions and a range of features. Journalism strengthens democracy. Invest in the future today.
Subscribe to News24
Next on Channel24
Showmax drops mobile-only pricing to R39