EXCLUSIVE: Bear Grylls on sucking milk from a goat teat with Armie Hammer to 'Running Wild' with Barack Obama 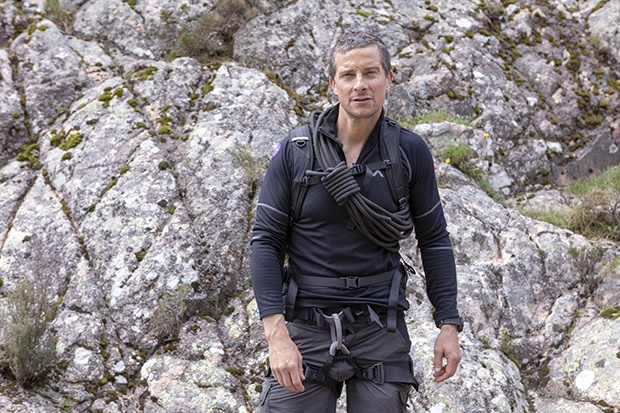 As 2020 comes to an end I look back at this interview as one of my favourites of the year. It's not often you get to talk to one of your heroes and they turn out to be really great people. The interview took place early in January and it was pure delight to hear Bear's familiar voice on the other side of the line.

Herman Eloff, Lifestyle and Entertainment Editor at News24, catches up with British former SAS serviceman and survival expert Bear Grylls in London over the phone.

Cape Town - "If you can get your lips around its nipples," says Bear Grylls to a shocked looking Armie Hammer whilst clutching a wild goat by the horns.

Armie pauses as Bear lets out a big laugh. The two had just traversed an underwater cave and an almost vertical cliff in Sardinia, but nothing had prepared them for this moment.

Armie, known for his dapper onscreen appearances, grabs the udder and gently pinches the teat until a white stream off milk comes shooting out.

"You know what," Armie says to Bear. "I came this far. I’m going to do it," the actor says with as much confidence as he could possibly muster up as he goes on his knees.

"I’ve never sucked on a goat teat before," he mumbles as he begrudgingly gets ready to drink the milk straight from its natural source.

"I just squirted the freshest milk straight into my mouth and I’m happy to say it was delicious," Armie confesses as Bear himself prepares to drink milk from the goat.

It’s only after both men had sucked on the teat of the goat that they realise they could have just squeezed the milk directly into one of their empty canisters stuffed into their backpacks. The goat, surely a little baffled by all the attention but totally unharmed, walks off as Bear and Armie laugh at their awkward encounter on the latest season of Bear’s outdoor adventure series Running Wild with Bear Grylls which airs Wednesdays at 21:00 on National Geographic (DStv 181).

"I think for me seeing Armie Hammer drinking milk from the nipple of a goat was definitely a new one. I thought we’d just squeeze the teat and we’ll get some milk and it will give us some energy for the rest of the journey, but he dived in for it and it was pretty funny," Bear tells me over the phone from London in that instantly recognisable voice of his that makes you believe and trust every word that comes out of his mouth.

He's a man of immense knowledge and a boatload of experience when it comes to survival in the wild and so when he talks, you kind of just want to listen.

"We took a liking to Armie. He’s become a good friend. I think out of all the episodes I did on this season that was the one where I laughed the most," he says before adding: "He’s such a good guy.  He laughs at himself.  He threw himself into the adventure, and we love Armie."

My interview with Bear was first scheduled over the December holiday season but the hardcore adventure man known for risking life and limb had fallen victim to the flu and lost his voice. So, instead it’s early January when I get to chat with the man himself about the fifth season of the show that has found a new home on National Geographic. Something Bear describes as the show finally "coming home". (WE MADE IT: Bear Grylls and Armie Hammer in Sardinia, Italy. Photo: National Geographic/Jeff Ellingson)

He adds: "They’ve been an amazing team to work with. They’ve supported us and encouraged us and allowed us to push the boundaries of what we’ve done on the show. I think they’ve allowed us to go to locations that we really wanted but haven’t explored so much before, and also, they’ve encouraged us to do some crazier things with these guests that we’ve never done before.

"I look at this season and it’s an amazing sensation that after four seasons of the show somewhere else we can still be doing stuff that I’ve never done and these guests have never done and still keeping it fresh and exciting. Running Wild ultimately is about getting to know these guests in a really real human way, and I think when the experience is empowering and fun, then you get to know people in that sort of way. As I said, it sort of feels like coming home, and I like that." The number of A-list stars that have appeared on the show in previous seasons is endless and include high profile figures like President Barack Obama and Oscar-winner Julia Roberts. This season is no different with stars like Brie Larson, Armie Hammer, Cara Delevingne, Channing Tatum, and Zachary Quinto taking on the biggest challenges that nature can throw at them.

But how does the show select their guests?

"We always try and pick interesting people that maybe you know really well from the movies or TV but you maybe don’t know them as a human being so well.  And we try and pick diverse, interesting, often quite unlikely people to come," Bear explains.

"We’ve had a lot of Hollywood stars and these people asking to come on Running Wild, and sometimes the diaries don’t work and they go oh let’s do it next season, and we plan it like that. But ultimately, we take people that really want to do it. That is the key.  People who — these stars don’t need the money. They don’t need the fame. They’re coming because they want the experience to learn these skills and to have an empowering journey, and that’s the heart of Running Wild.

How did they manage to get Obama on the show? Bear reveals that Obama’s team actually approached him. "President Obama approached us to say that he was going to Alaska.  He really wanted to see some of the effects of climate change close-up for himself, and he was just driving me through this big climate change agenda at the time. So, for us it was a great privilege to take him and show him some of this.  It’s something that’s very close to our Running Wild team’s heart, and it’s something that’s very close to National Geographic’s heart to be doing all we can to protect the planet and also to make people aware of the effects of negative stuff that we do on the planet.

"The Obama one was amazing to be able to take somebody with such power and show them that, and we would do the same again with other world leaders, because I think we have to engage, and we have to inspire leaders to see what needs doing in our planet. We took Prime Minister Narendra Modi of India recently on an adventure to show him a lot of the wilderness and to hear his vision, and we would the others.

"But what I love about Running Wild is that ultimately the wild doesn’t care who you are.  It doesn’t treat you any differently. The wild just rewards commitment and courage and perseverance, and you have to treat it with respect. I always say the wild is like your mama. If you treat her right, she’ll treat you right. If you disrespect her, she’ll treat you with a lesson you’ll never forget. That’s what I always tell our young boys, and I think it is true. You have to respect Mother Nature.” 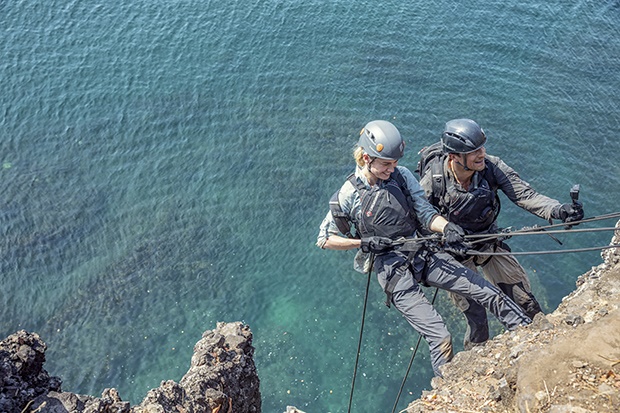 There’s one part of the show I’ve always wondered about and I finally got to ask Bear himself – who on earth films it all? He laughs and answers: "They’re an amazing small team of best friends of mine.  We double tag them now, so we have two key teams that hop between the programs.

"They’ve been with me pretty much from the very beginning. I mean many of them have been them there from literally my first set of TV program of Escape to the Legion, French Foreign Legion. Mungo was the cameraman on that, and it’s a small team; two cameras, two sounds, a couple of mountain guys to keep the crew able to put them on ropes into positions fast and dynamically as we’re moving, and it’s a small team of as I said best friends, unsung heroes. They work incredibly hard. They carry a lot of weight, because they’re carrying the cameras and batteries.

Bear pauses a minute then says with a sudden lighter tone in his voice: "They always joke that their job is much harder, because they do everything that we do…but backwards, and that’s pretty true."

Catch Bear Grylls and his celebrity guests as they take on the elements every Wednesday night at 21:00 on National Geographic (DStv 181).

We live in a world where facts and fiction get blurred
In times of uncertainty you need journalism you can trust. For only R75 per month, you have access to a world of in-depth analyses, investigative journalism, top opinions and a range of features. Journalism strengthens democracy. Invest in the future today.
Subscribe to News24
Related Links
WATCH: 'Top Gear' co-hosts Paddy McGuinness and Chris Harris share inside details about new...
Editor’s Pick: 3 shows I’m streaming right now
'Parasite' invades Oscars race with stunning SAG award win
Next on Channel24
Broadcasters will make big money from the Tokyo Olympics, but who will pay the ultimate price?