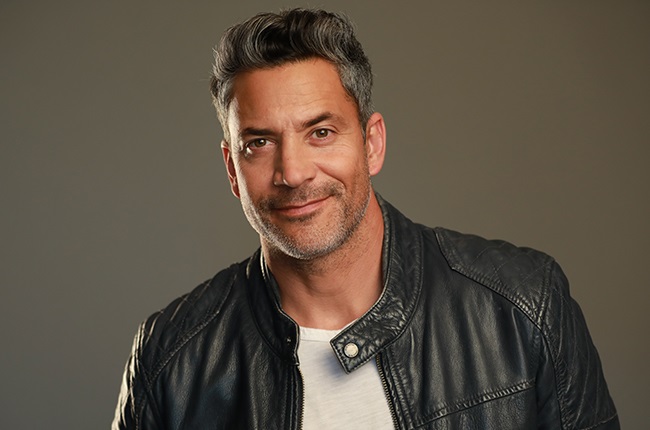 We last saw Nico Panagio in a television soap when he played the hunky businessman George Kyriakis in 7de Laan. Now the Survivor SA presenter makes his way back to our screens daily in M-Net's telenovela Legacy.

The 48-year-old will play Detective Marco Andino, who makes his first appearance on Wednesday, 6 October.

According to the character description Marco is "much wounded by life and what he's seen, with most of his scars hidden under a smooth, controlled exterior".

"Fiercely loyal to those he loves and trusts, he's the guy you want by your side when you need a friend. but betray him, and you discover how cold he can be; never vindictive, just icy; once bitten, you never get the chance to bite him again."

In this Q&A, Nico tells us more about the character that made him return to daily TV, how he fits into the story, and what he thinks Legacy's secret ingredient is.

You're back in a daily soapie after a hiatus; what was it about detective Marco that made you want to return?

I have been doing scripted series and films in between Survivor and other endeavours, but it's been a while since I have been on a soap. I caught season 1 of Legacy in between filming and really enjoyed the writing and creative style from the get-go. Interestingly, soon after I started watching Legacy, the production contacted me and asked if I would be interested in doing a storyline on season 2 of the show, which was a very welcome coincidence indeed. Marco was born after we worked out how we would get me up and down between Cape Town and Jozi for filming. The writers also had to work out the best way to write a character that could come in and out of the narrative in a way that made sense.

What's it like to be back working on a telenovela?

Acting has always been my first love, so I always enjoy it immensely, but I've always enjoyed presenting too. Since both require that you use your body and mind as an instrument, one just applies the skills differently depending on what field you are working in. What I love about character work is that you get in and embody this new persona with different challenges and driving forces. You throw all you have into giving them life, allowing them to evolve and become something more than you anticipated, and then you immerse yourself in their journey. When you're done, you stagger out, usually exhausted but very satisfied. Having watched it as a viewer and now starring it in, what do you think is the show's secret ingredient which keeps it appealing to viewers.

Well, it all starts with excellent writing. Plots that twist and surprise at every turn allow just so much pay off to leave the viewers satisfied but wanting more! Then you need to flesh that out with great directing and an incredible cast of seasoned actors and capture it with the best skills in terms of crew. Legacy has managed to do all of that. The show is also deliciously intriguing, giving viewers a glimpse into that inaccessible world reserved for only the very wealthy. On top of that, the protagonists in the form of Felicity and Dineo can take the characters to the very edge of what is normally acceptable for the leads of a show and still somehow redeem themselves. Once again testament to great writing, directing and exceptional performances from Mary-Anne and Kgomotso.

How does Marco fit into the story so far, and what will he bring to the show?

Marco steps into Felicity's life at the moment when she least expects it but also perhaps needs it the most. At first, their meeting seems like just a casual affair until they realise, to their surprise, that there is much more to what they share. Since Felicity's life is one of a myriad of complications, there is a minefield of obstacles that they both need to overcome if they have any chance of making it work. The harder they try to resist, the more they are drawn to one another, and the more dire the consequences to their relationship become.

One has to build a back story to your character and create a world from whence he comes. Once you have established his past, you can work out his present, where he finds himself now as a consequence of his past experiences. You can then allow him to experience the situations he finds himself in from a more organic perspective, as the character and not the actor. Often times this approach takes you on a journey that you never anticipated and makes it much more exciting to play.

Soapie fans are pretty vocal on social media; how do you hope fans will receive your character?

Marco is quite the juxtaposition to Felicity in that he optimises a simpler and more direct approach to life. When he is working as a detective, he is very focussed and serious, very broody. However, when he is with her, you see the side of him that has been kept hidden for what seems like many years. I think these characters coming together shows a side of Felicity to the audience that has not yet been explored, and I'm hoping the viewers enjoy the way that unfolds. We want viewers to fall in love with their love and to share their despair when they struggle through the hardships that threaten this new discovery. So doing, we all go on an emotional journey with these characters, and our job would be well done. That is what I hope for.

Det. Marco makes his debut on what seems to be a one-night stand with Felicity (Mary-anne Barlow).
Photo: Tshedza Pictures